The Bold and the Beautiful Spoilers: Tuesday, November 26 – Ridge Walks Out On Brooke – Thomas Tells Douglas Hope’s His New Mother

BY hellodrdavis on November 25, 2019 | Comments: one comment
Related : Soap Opera, The Bold and the Beautiful 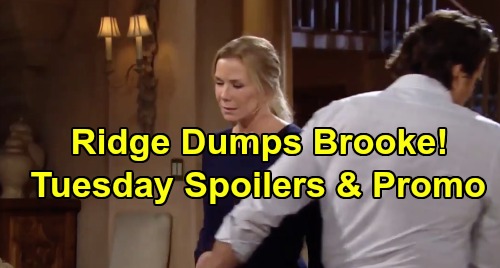 The Bold and the Beautiful spoilers for Tuesday, November 26, tease that Brooke Forrester (Katherine Kelly Lang) will have some explaining to do. As B&B viewers know, she’s just told Ridge Forrester (Thorsten Kaye) the story of how Hope Logan (Annika Noelle) pushed Thomas Forrester (Matthew Atkinson) into the vat of what she thought was hydrofluoric acid. Now Ridge is stunned and is trying to process the unbelievable tale he’s just heard.

Well, it seems that things won’t go well from here between Ridge and Brooke. According to B&B spoilers, their relationship will change forever in a pivotal moment. It looks like it will really sink in for Ridge that Brooke was willing to conceal his son’s death from him for a full 24 hours in order to protect Hope. Brooke may try to explain that she was only protecting her daughter the way that Ridge has sought to protect Thomas all this time, but don’t expect that to fly with Ridge.

Rather, Ridge will decide that he’s had enough, and that this is the end of the line for his marriage to Brooke. B&B viewers should expect some emotional scenes as Brooke begs Ridge not to walk out on her and to see things her way. But Brooke’s actions and decision to keep Thomas’ death from her will be too much for Ridge to bear. He’s probably going to think that Brooke would have kept the secret indefinitely had Thomas not returned.

And despite Brooke’s pleas for Ridge to consider things from her perspective, he’ll decide that he’s done and that he’s leaving Brooke. We’ll see if he formally declares that their marriage is over, but it’s certainly looking like he will reach that decision.

Meanwhile, on the new episode of B&B on Tuesday, November 26, Hope and Thomas will continue their conversation at Brooke’s mansion. As B&B viewers know, Thomas has just told Hope that he will not contest the paperwork he signed allowing Hope to adopt Douglas Forrester (Henry Joseph Samiri). That made Hope pretty happy, but she still seems skeptical about the prospect of co-parenting Douglas with Thomas.

After all, prior to believing that Thomas was dead, Hope’s big plan was to adopt Douglas with the intention of eventually filing for sole custody of the little boy. But now she’s been through Thomas’ death scare and had to live with the prospect of Douglas losing his father forever, which she felt horribly about. It seems that Hope may be realizing that she’s now in the position of being an equal co-parent with Thomas forever, which is a big change to her plan.

On Tuesday’s episode of B&B, Hope and Thomas will decide to tell Douglas together that she is his new mother and will be formally adopting him. It looks like they’ll catch Douglas before he drifts off to sleep and spring the news on him. He should be thrilled to hear that Hope will be his mother forever, and we’ll probably see some nice bonding moments between Thomas, Douglas, and Hope. Perhaps it will be the start to a good co-parenting relationship for them.

Brooke and Ridge are saying goodbye. 👋 See what happens when Shauna finds out this week on #BoldandBeautiful! pic.twitter.com/VhnA5OK1UV