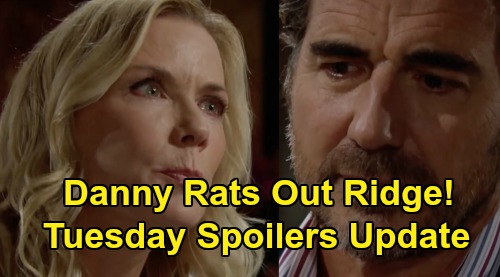 The Bold and the Beautiful spoilers update for Tuesday, October 1, tease that Thomas Forrester’s (Matthew Atkinson) plan to fracture Ridge Forrester’s (Thorsten Kaye) marriage to Brooke Forrester (Katherine Kelly Lang) will go into full swing. Thomas was absolutely gleeful when he found out from Danny the bartender (Keith Carlos) that Ridge had spent the night with another woman in the room above Bikini Bar.

And then when Thomas found out that the woman was none other than Shauna Fulton (Denise Richards), one could practically see the wheels turning in Thomas’ head. As B&B viewers know, Thomas has just had a major altercation with Brooke Forrester (Matthew Atkinson), and he wants nothing more than to rid his family of the Logans, starting with Brooke.

So Thomas decided to arrange things so that Brooke learns the news about Ridge and Shauna’s night together. He manipulated Danny into calling Brooke to see if she’d come to the bar and retrieve Ridge’s belt, which he left in the upstairs room. And according to The Bold and the Beautiful spoilers for Tuesday, Brooke will head to Bikini Bar, where Danny will be under strict instructions to let it “accidentally” slip that someone else helped carry Ridge upstairs that night.

Of course, Brooke will want to know who that other person was, and she won’t let up until Danny appears to be forced to spill the beans. It looks like this is how Brooke will learn that Ridge spent the night with Shauna, and B&B viewers can expect her to be absolutely horrified. Not only will Ridge have spent the night with someone else, it will be someone who betrayed Brooke’s daughter Hope Logan (Annika Noelle).

Meanwhile, on the new episode of B&B on Tuesday, October 1, Bill Spencer (Don Diamont) will issue a warning. As B&B viewers know, Bill has been spending most of his time at the hospital with Katie Logan (Heather Tom), who kidneys are failing. She’s in pretty bad shape and Bill’s worried sick about her. The last thing he needs right now is to be reminded about the horrible things that were done to his family by the people who kept his granddaughter’s existence a secret.

But that’s exactly what will happen when Bill spots Shauna at the hospital. It seems that Shauna will find out about Katie’s plight and she’ll go to the hospital to see what’s going on. Of course, the last thing that Katie would want is to see Shauna or Flo Fulton (Katrina Bowden) after the way they lied and kept Beth Spencer (River Davidson and Madeline Valdez) from Hope for so long.

According to B&B spoilers, Bill will let Shauna know in no uncertain terms that she’s not welcome there, and that under no circumstances is she going to see Katie and upset her when she’s in this condition. Furthermore, he’ll issue a warning to Shauna to stay away from all the Logan women going forward. He’ll definitely let it be known that Katie, her sisters, and Hope are off-limits to Shauna, or he’ll know the reason why.

Of course, Shauna tends to not take orders from people, so she’ll probably stand up for herself and insist that she’s only there to check in on Katie because she genuinely cares for Flo’s family. But something tells us that Bill’s not going to back down on this, and he’ll insist that Shauna leave the premises.