BY hellodrdavis on August 20, 2019 | Comments: one comment
Related : Soap Opera, Spoiler, Television, The Bold and the Beautiful 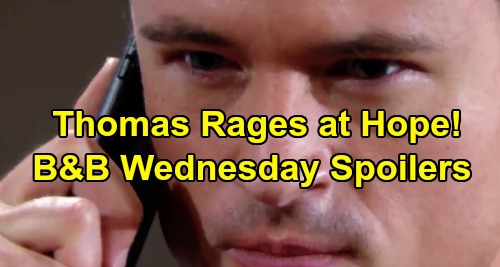 The Bold and the Beautiful spoilers for Wednesday, August 21, tease that Thomas Forrester (Matthew Atkinson) will get some startling news. As B&B viewers know, Thomas is currently in hiding with his friend Vincent Walker (Joe LoCicero), where he’s grown increasingly agitated and angry over the situation he’s in. He knows that Hope Logan (Annika Noelle) has been reunited with her daughter Beth Spencer (River Davidson and Madeline Valdez), and he suspects that she’s also back together with Liam Spencer (Scott Clifton) – something that he finds absolutely unacceptable.

Vincent has done his best to try to calm Thomas down, but Thomas’ agitation is only growing, and he’s starting to talk about Hope as if she’s his possession. Even more troubling, Thomas is starting to talk about things like “until death do us part” as if he’s contemplating killing Liam or even Hope. He might be taking an “if I can’t have her no one can have her” mindset, which sounds terribly ominous.

Well, on Wednesday’s episode, something will happen that will further enrage Thomas. He’ll learn that Hope is planning on annulling their marriage. Perhaps Justin Barber (Aaron D. Spears) or one of his people will try to get in touch with Thomas over the annulment. At any rate, Thomas will find out about Hope’s intentions, and he’ll be completely outraged.

It looks like Thomas will even get on the phone with Hope and rage at her about her decision, but Hope will remain firm with him and tell him in no uncertain terms that her mind is made up and that their marriage is over. Of course, that won’t sit well with Thomas, who will probably explode in anger and frustration. Thomas doesn’t handle frustration well as a general rule, but now that he’s off the rails, he’s really going to go out of control.

Meanwhile, on the new episode of B&B on Wednesday, August 21, Brooke Forrester (Katherine Kelly Lang) and Liam will find themselves growing increasingly worried about Thomas. It looks like they’ll each be well-aware of Hope’s phone conversation with Thomas, and they’ll worry about what he might do in the wake of hearing about Hope’s plan to annul their marriage.

Of course, Liam knows just how violent and dangerous Thomas can be. After all, Thomas physically came after Liam during their big showdown at Forrester Creations. And Brooke is now aware that the police are investigating Thomas for possibly running Emma Barber (Nia Sioux) off the road on the evening that she was going to tell Hope that Beth was alive. Thomas may not have been 100% responsible for Emma’s death, but he heavily contributed to the accident.

At any rate, it looks like both Brooke and Liam will start to grow concerned that Thomas is out there on the loose and angry over Hope reclaiming her life. And they’re right to be concerned, as ongoing The Bold and the Beautiful spoilers indicate that Thomas is going to soon track Hope down and confront her about the annulment. B&B viewers will want to stay tuned to catch the exciting action as it unfolds!