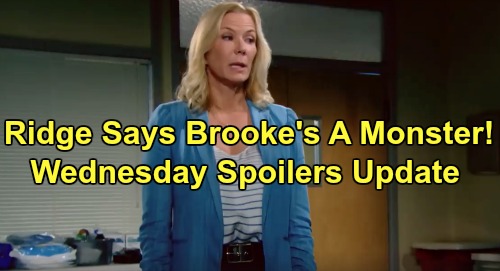 The Bold and the Beautiful (B&B) spoilers for Wednesday, August 28, tease that Shauna Fulton (Denise Richards) will want to check in with her daughter. B&B fans know Florence “Flo” Fulton (Katrina Bowden) was arrested for her role in the baby swap drama. She’s currently stuck behind bars, so Shauna will pay her a visit just to see how she’s doing.

Of course, Flo is doing about as well as can be expected, which is…not great. She’s in jail and that’s obviously not somewhere she wants to be. Flo gets that she’s paying the price for her mistakes, but Shauna won’t stand for that. Once she sees the horrifying reality of Flo’s current circumstances, Shauna’s protective Mama bear instincts will kick in. She’ll be desperate to get Flo out of this nightmare.

The Bold and the Beautiful spoilers say Shauna will reassure her glum daughter. Flo may not have much faith in her mom’s abilities, but Shauna will be determined to fix this. She’ll want to get Flo out of jail and hopefully get her off the hook entirely. Shauna will hate the idea of Flo rotting in a cell for years, so she’ll be incredibly motivated to make things happen.

Quinn Forrester (Rena Sofer) will be called on for help later this week, but she’s awfully tied to the Forrester family. Shauna will have to make a very passionate pitch to win Quinn over. However, we have no doubt that Shauna can get Quinn on board eventually.

In the meantime, Ridge Forrester (Thorsten Kaye) will seethe over Hope Logan’s (Annika Noelle) latest admission. She just clarified that Thomas Forrester (Matthew Atkinson) really didn’t pose a threat by the cliff. Thomas wasn’t doing anything intimidating; he was just trying to apologize. That means Brooke shoved Thomas unnecessarily, so Ridge will be hopping mad at his wife.

Brooke will insist she fully believed Hope was in trouble. It certainly looked that way when Brooke came upon the shocking scene. Unfortunately, The Bold and the Beautiful spoilers state that Ridge won’t believe Brooke’s claims. He’ll be more convinced than ever this was an intentional attack on his son. Ridge will defend Thomas as someone who was trying to the right thing and make Brooke out to be a monster!