The Bold and the Beautiful Spoilers: Wednesday, January 23 – Reese Begs Flo Not To Bolt On Baby Scam – Wyatt Warns Liam 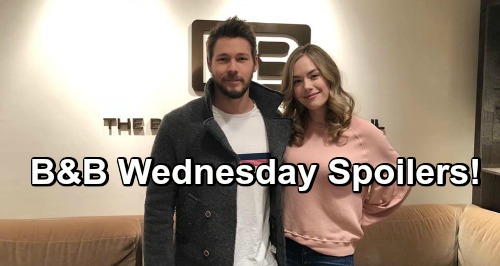 The Bold and the Beautiful spoilers for Wednesday, January 23, tease that Flo (Katrina Bowden) will reel from the story that Reese Buckingham (Wayne Brady) has just told her. Reese admitted to kidnapping Beth Spencer after she was born alive and presenting Hope Spencer (Annika Noelle) and Liam Spencer (Scott Clifton) with a deceased baby born earlier that night at the Catalina clinic.

This is a huge revelation, and Flo will be stunned with what her friend Reese has done. She’ll probably threaten to bolt on the whole plan, as she won’t want to get further involved in such a scheme. She’ll feel it’s bad enough that she’s pretended to be baby Beth’s mom, and she won’t want to continue to be a part of this terrible situation.

But when Flo confronts Reese about what he’s done, he’ll justify his actions. He’ll point out that his own daughter Zoe Buckingham (Kiara Barnes) is in jeopardy. The thug has already threatened her on more than one occasion, and it’s only a matter of time until Zoe gets seriously hurt, or worse.

Reese will insist that he needs to adopt this baby to Steffy Forrester (Jacqueline MacInnes Wood) asap in order to get the money to pay off his gambling debt and get Zoe out of harm’s way. He knows that Taylor Hayes (Hunter Tylo) will pay big bucks for a baby for Steffy, and he needs that money now.

So Reese will urge Flo to stay on board with his plan and continue to play the role of baby Beth’s mom who wants to give her up for adoption. Flo will take some convincing, but it looks like she’ll agree to continue with Reese’s plan in order to save Zoe from harm’s way.

Meanwhile, on the new B&B episode on Wednesday, January 23, Wyatt Spencer (Darin Brooks) will visit with his brother Liam. Liam has been having a tough time dealing with Beth’s death and with Hope’s depressive state. Wyatt will listen sympathetically, and he’ll tell Liam that he’ll always have his back.

In the course of their conversation, Wyatt will learn about Steffy’s possible adoption opportunity, and he’ll be stunned that she is thinking about adopting right now. The timing will seem suspect to Wyatt, and he’ll question Steffy’s decision to adopt so soon after Hope and Liam lost Beth.

Still, it looks like Wyatt will have lingering concerns. Wyatt’s got pretty good instincts when it comes to Hope, and he may point out that Hope may not be ok with Steffy welcoming a new baby home when she just lost Beth. He may also point out that Hope might be peeved with Liam for supporting the adoption effort right now. But will Liam listen to his brother?