BY Heather Hughes on June 12, 2019 | Comments: one comment
Related : Soap Opera, Spoiler, Television, The Bold and the Beautiful 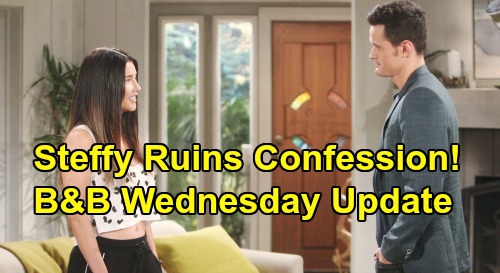 The Bold and the Beautiful (B&B) spoilers update for Wednesday, June 12, tease that Florence “Flo” Fulton (Katrina Bowden) and Zoe Buckingham (Kiara Barnes) will have another heated confrontation. These two consistently clash over the baby swap secret, which is now in Thomas Forrester’s (Matthew Atkinson) hands. Zoe’s freaking out big time, but Flo will think it’s time to face the music and finally break free from this guilt.

However, landing behind bars isn’t the kind of freedom Zoe’s looking for! She won’t want to trade mental anguish for being physically stuck in prison. Zoe knows Dr. Reese Buckingham (Wayne Brady) will face many years in the slammer if the truth comes out. She also knows she could end up in a cell and so could Flo.

Zoe certainly won’t be down for that, but Flo will contend that the truth must come out. She’ll think it’s inevitable now that Thomas is a secret-keeper, too. Flo will urge Zoe to just let the real story be exposed. She won’t think Zoe should try any last-ditch strategies or stunts to stop it. Flo will feel like they got away with this for long enough, so they need to deal with the ramifications.

Of course, B&B spoilers say Zoe may not give up. She might even try to stop Thomas, but it doesn’t look like that’ll be necessary. Thomas will battle complex feelings as he prepares to tell Steffy Forrester (Jacqueline MacInnes Wood) the truth about “Phoebe Forrester” (River Davidson and Madeline Valdez). He’ll have trouble actually going through with this painful admission.

Steffy’s delighted to have Liam Spencer (Scott Clifton) and the girls under one roof with her, so there’s even more at stake now. If Thomas comes clean, he’ll break his sister’s heart into a million pieces. Steffy is raising Hope Logan’s (Annika Noelle) daughter! How could she even begin to wrap her head around that? The Bold and the Beautiful spoilers state that Thomas’ head will be spinning as well.

Steffy mentioned she couldn’t love “Phoebe” more if she’d given birth to the kid herself, so this love is real and deeper than ever. As a result, Thomas will bail on the confession idea and take a little longer to think this through. It won’t be any easy decision since Hope has suffered so much, but that’s another factor in all this. Thomas’ shot with Hope hinges on her suffering.