BY hellodrdavis on March 19, 2019 | Comments: one comment
Related : Soap Opera, Spoiler, Television, The Bold and the Beautiful 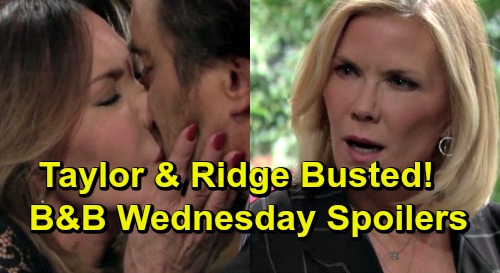 The Bold and the Beautiful spoilers for Wednesday, March 20, tease that Bill Spencer (Don Diamont) and Katie Logan (Heather Tom) will be the targets of their matchmaking friends once again. Justin Barber (Aaron D. Spears) and Donna Logan (Jennifer Gareis) set them up previously with a nice lunch at Il Giardino, and even though Bill and Katie suspected that someone was behind their meetup, they still enjoyed their time together.

According to B&B spoilers, Justin and Donna will arrange yet another “Batie” encounter – this time, a romantic dinner for two. They might get some help from Wyatt Spencer (Darin Brooks) and Sally Spectra (Courtney Hope) this time around, since it seems that they’re also on board with the matchmaking effort. It doesn’t look like this new “accidental” meeting will fool Katie or Bill, either, but they’ll play along.

At dinner, Bill and Katie will talk, and B&B spoilers say that they’ll observe just how much each other has grown. Katie will probably be especially impressed with how Bill rallied the family together after Caroline Spencer’s (Linsey Godfrey) death, and of course by how he’s stepped up to be an attentive and loving father to Will Spencer (Finnegan George). Bill will note that Katie has grown as well, and that she’s the best mother to Will that he could hope for.

But will Justin and Donna’s attempt to play cupid this time around result in a little romance between Bill and Katie? It might still be a bit soon for Katie, who is still reeling from the demise of her marriage to Thorne Forrester (Ingo Rademacher). But it does look like Bill and Katie will thoroughly enjoy each other’s company at the dinner, as B&B spoilers say that they’ll each secretly hope to have another “accidental” run in with each other. That’s great news for “Batie” fans!

Meanwhile, on the new episode of B&B on Wednesday, March 20, expect a hot moment between Taylor Hayes (Hunter Tylo) and Ridge Forrester (Thorsten Kaye). The two have been spending time comforting each other and bonding in the wake of Caroline’s death. They’ve put on a solid front for the sake of Thomas Forrester (Matthew Atkinson) and Douglas Forrester (Henry Joseph Samiri) and seem to be getting along very well.

But their closeness will take a turn on Wednesday’s episode. B&B spoilers say that Taylor and Ridge will get to talking and Taylor will relive a poignant moment from her past with Ridge. One thing will lead to another, and Taylor will kiss Ridge in the heat of the moment. This will take Ridge by surprise, but it will also horrify someone else who happens to be standing by and watching…and that’s Brooke Forrester (Katherine Kelly Lang)!

Taylor and Ridge will be completely unaware that Brooke has watched the whole scene unfold, and B&B spoilers say that the incident will later lead to a major fight between Taylor and Brooke that becomes quite physical. It will also lead to a later confrontation between Brooke and Ridge, as Brooke confronts him over the kiss and expresses her displeasure at the scene.