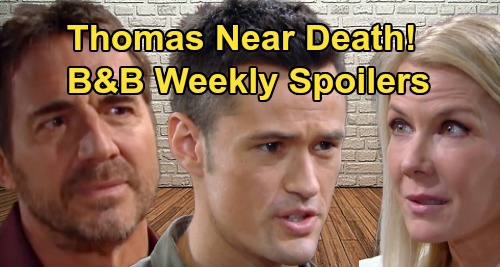 The Bold and the Beautiful (B&B) spoilers for the week of August 26-30 tease that we’ll see major conflict. After Thomas Forrester (Matthew Atkinson) is severely injured following his showdown with Hope Logan (Annika Noelle), Ridge Forrester (Thorsten Kaye) will think there’s only one person to blame: his own wife! He’ll level some serious accusations at Brooke Forrester (Katherine Kelly Lang) in the aftermath.

Ridge and Brooke’s marriage will be put to the ultimate test thanks to their latest ordeal. As Thomas fights for his life in the hospital, Ridge will fume over what he views as attempted murder. Detective Alex Sanchez (Jeremy Ray Valdez) will also ask some hard questions here, but Brooke will insist she’s innocent. She’ll put the blame on Thomas and argue that she did what she had to do.

Meanwhile, Hope will battle guilt over the situation. She was furious with Thomas for his behavior, but that doesn’t mean she wanted him to die. That’ll certainly be a concern after Dr. Jordan Armstrong (Vincent Irizarry) examines Thomas. The Forresters, Logans and Spencers will all worry Thomas isn’t going to make it.

Liam will assure Hope that she’s not responsible for what went down. He’ll make it clear Brooke isn’t at fault either. Liam will think Thomas only has himself to blame for his dire predicament. The Bold and the Beautiful spoilers say Liam will visit the unconscious patient in the week ahead. He’ll rage at his captive audience, but Ridge won’t approve when he happens upon the scene.

Ridge will think Liam’s cruel for coming in Thomas’ room and spewing venom at a dying man. He’ll be appalled and will likely kick Liam out, which should leave him alone with his son. Ridge might take a moment to apologize to Thomas since he feels like he let him down. He may push Thomas to wake up so he can get the help he needs and rejoin his family.

Over with Shauna Fulton (Denise Richards), she’ll make a confession to Quinn Forrester (Rena Sofer). Shauna will acknowledge that what she did was wrong, but she’ll also plead her case and hope Quinn will assist her. She’ll be desperate to get Florence “Flo” Fulton (Katrina Bowden) out of the mess she’s in. Shauna will push Quinn to understand what Flo was up against and help free her daughter from prison.