The Bold and the Beautiful Spoilers: Week of May 6 Preview – Hope Wants to Be Part of Thomas’ Life – Liam Fights For His Wife

BY Heather Hughes on May 3, 2019 | Comments: 2 comments
Related : Soap Opera, Spoiler, Television, The Bold and the Beautiful 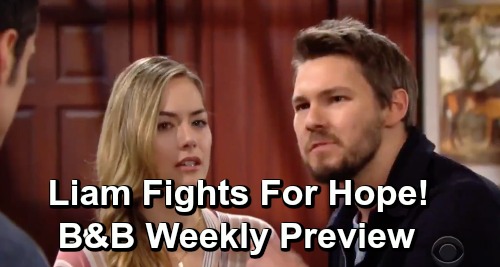 The Bold and the Beautiful (B&B) spoilers preview for the week of May 6-10 tease that Thomas Forrester (Matthew Atkinson) will be relentless in his pursuit of Hope Spencer (Annika Noelle). She’ll look overwhelmed as Thomas insists she’s the only one he wants. It’s clear that Thomas is going to fight for Hope with everything he’s got.

Thomas will argue that Liam Spencer (Scott Clifton) is always going to be a waffler, but he’ll think it can be different if she chooses him. He’ll push Hope to accept their destiny and move on from Liam. Hope will point out that she’s married, but Thomas will suggest that’s just a temporary thing. He’ll contend that it can easily be remedied, but Hope will refuse to leave her husband.

Later, Thomas will have a fantasy of Hope coming back and admitting she was wrong. The Bold and the Beautiful released a weekly promo that features this clip. Hope can be seen leaning in close and saying, “I want to be part of your life, too.”

In this fantasy, Hope will tell Thomas that she needs a man who wants her and only her. She’ll grab him and kiss him passionately, but Thomas’ daydream won’t become reality anytime soon. Instead, Thomas will deal with a nightmare named Liam!

B&B viewers can expect Wyatt Spencer (Darin Brooks) to contact his brother about Thomas’ plan. He’ll gripe about Thomas making moves on Hope and state that Liam needs to come home ASAP. Liam will agree that the situation requires immediate action. Once he catches a flight back to LA, Liam will be ready to unleash his wrath.

The Bold and the Beautiful spoilers say Liam will want to get something straight. He’ll refuse to let Thomas pursue a married woman like this. Liam loves Hope and has no intention of letting Thomas go after her. B&B’s preview video shows Liam declaring, “THIS is my wife! My wife! So all the manipulating stops NOW.”

Thomas will seem smug and unimpressed, so it doesn’t look like he’ll be too scared of Liam’s warning. As for Hope, she’ll stand there baffled by everything that’s playing out. Hope’s emotions will be spiraling out of control, so this ordeal should be hard on her.