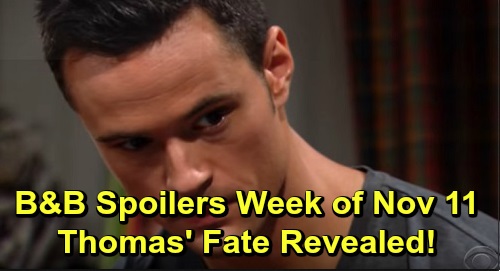 The Bold and the Beautiful (B&B) spoilers for the week of November 11-15 tease that some wild moments are coming up. For starters, we should talk about that vat of hydrochloric acid and what it means for the whole Thomas Forrester (Matthew Atkinson) situation. Will Thomas fall into the vat and end his story arc? Will Hope Logan (Annika Noelle) simply believe Thomas fell into it instead?

It’s possible there’ll be some trickery going on that could bring Thomas back at a later date. Regardless, Thomas is the most likely candidate to fall in. Hope will find herself facing a moral dilemma in the week ahead. B&B fans can expect Hope to wrestle with guilt, but Douglas Forrester (Henry Joseph Samiri) will be what she tries to focus on. She’ll officially become Douglas’ mother, but not everyone will be happy about that.

Steffy Forrester (Jacqueline MacInnes Wood) will bash Brooke Forrester (Katherine Kelly Lang) during an upcoming conversation with her dad. She’ll give Ridge Forrester (Thorsten Kaye) the lowdown on Brooke’s shady activities, which undoubtedly tie in with Hope’s joint custody plan. Ridge will be furious when he realizes Hope manipulated Thomas into signing the adoption papers and sharing Douglas. Of course, the full story may be far worse thanks to that deadly acid vat!

The Bold and the Beautiful spoilers say Brooke will cover for Hope and do whatever she can to settle the conflict. She won’t want Hope getting in trouble for what she feels is Thomas’ fault. In Brooke’s mind, Thomas is the only one who was obsessed in out of control. Some B&B viewers would beg to differ since Hope’s been pretty obsessed and out of control herself.

Even so, Brooke will naturally remain firmly on “Team Hope.” She’s got no use for Thomas and will think this custody issue turned out for the best. Ridge will still feel like he’s not getting the entire story here, but Brooke and Hope won’t be willing to offer the details. If Hope played any role in Thomas’ grim fate – even indirectly – it’s easy to see why they’d want to sweep that part under the rug.

For now, it looks like Thomas’ fate itself will be swept under the rug, too. Hope may act like Thomas simply took off, but we’ll have to see how the rest of this hot plot plays out. As for Liam Spencer (Scott Clifton), he’ll get updates on this mess eventually. Liam will also bring Steffy up to speed on his Spencer Publications comeback, so she’ll praise the decision and offer her support.

The Bold and the Beautiful spoilers say Liam and Steffy will grow even closer, which should be important once Hope’s deception is exposed. Her secrets could destroy “Lope” and push Liam right into Steffy’s arms! We’ll keep you posted as other B&B news comes in. Stay tuned to the CBS soap and don’t forget to check CDL often for the latest Bold and the Beautiful spoilers, updates and news.