The Bold and the Beautiful Spoilers: Weekly Preview Promo Video – Xander Rages at Zoe, Bursts In On Annulment Signing – Spills The Truth About Beth?

BY hellodrdavis on June 2, 2019 | Comments: one comment
Related : Soap Opera, Spoiler, Television, The Bold and the Beautiful 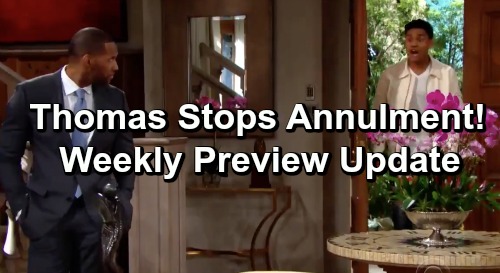 The Bold and the Beautiful spoilers tease that we’re in for a week filled with angst and urgency. The new B&B preview promo video for the week of June 3-7, starts out with an agitated Xander Avant (Adain Bradley) ranting and raving at Zoe Buckingham (Kiara Barnes) about the big secret she’s been keeping about Beth Spencer.

As The Bold and the Beautiful viewers know, Zoe has been concealing from Hope Spencer (Annika Noelle) and Liam Spencer (Scott Clifton) that their daughter is alive and well.

Beth is currently in Steffy Forrester’s (Jacqueline MacInnes Wood) home, living life as “Phoebe Forrester” (River Davidson and Madeline Valdez), and Xander will think that this is an unacceptable situation. B&B viewers will remember that the Avant family is close with the Forresters, Logans, and Spencers, so Xander will feel a serious obligation to tell Hope and Liam the truth.

The Bold and the Beautiful spoilers claim that despite Xander’s outrage over the lie, it looks like Zoe will succeed in keeping a lid on him for a little while.

She will probably let Xander know in no uncertain terms that if the truth comes out, then her father Reese Buckingham (Wayne Brady) and Florence “Flo” Fulton (Katrina Bowden) will certainly face serious jail time, and Zoe herself will probably face obstruction charges.

That will probably give Xander some pause, but soon he’ll get riled up again. According to B&B spoilers, he’ll learn that Hope and Liam are ending their marriage, and his rage will be fueled all over again. He won’t think it’s right that the secret has shattered Hope and Liam’s marriage, and he’ll want the truth to come out before it’s too late to save their union.

And that will leave Zoe and Flo in a huge panic. The weekly preview promo video shows Zoe telling Flo that Xander knows everything and Flo reeling from the news. They won’t be sure that they can keep Xander under wraps, especially since he has such a strong moral compass and wants to do right by Hope and Liam.

As it turns out, they’ll be right to be worried, as the promo ends with Xander lamenting that Hope and Liam are signing annulment papers and that they need to know the truth RIGHT NOW. As Hope, Liam, and Carter Walton (Lawrence Saint-Victor) have gathered to sign the papers and officially end their marriage, Xander will burst in the door and yell, “Stop!”

Of course, other Bold and the Beautiful spoilers indicate that Xander’s attempt to stop the signing will be thwarted somehow. Whether someone will stop him from stopping the signing, or whether he’ll think better of his actions on his own remain to be seen. But at any rate, the secret is going to be kept for a while longer, and viewers will have to tune in to see how it all plays out.

It sounds like a lot of B&B drama is heating up for this week, so stay tuned! We’ll give you updates as B&B news comes in. Stick with the CBS soap and don’t forget to check CDL often for the latest Bold and the Beautiful spoilers, updates, and news.