BY hellodrdavis on January 22, 2019 | Comments: one comment
Related : Soap Opera, Spoiler, Television, The Bold and the Beautiful 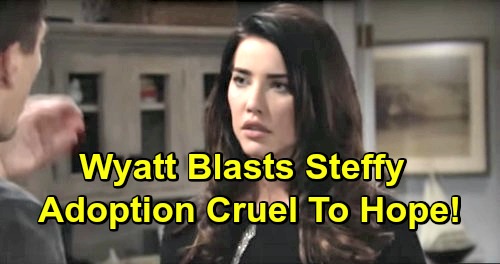 The Bold and the Beautiful spoilers tease that Wyatt Spencer (Scott Clifton) will have some strong opinions to impart on his brother Liam Spencer (Scott Clifton). Wyatt has been watching in the wings as Liam and Hope Spencer (Annika Noelle) grieve for their deceased daughter Beth Spencer, and he sees just how difficult the situation is for Hope in particular.

Of course, Wyatt and Hope lost their own baby several years ago, and Wyatt has a soft spot for Hope and what she’s going through right now. He also watched as Hope had a total meltdown over Sally Spectra (Courtney Hope) bringing Hope a comfort puppy. Hope freaked and found the gesture terribly offensive.

Wyatt knew that presenting Hope with a puppy was a bad idea from the get-go, and he generally seems to have good instincts when it comes to Hope, maybe even better instincts that Liam has. Right now, Liam can’t seem to get through to Hope, and it looks like he’s soon going to go down a path that might seriously jeopardize his marriage.

Liam plans to assist Steffy Forrester (Jacqueline MacInnes Wood) with her adoption by meeting the infant that Reese Buckingham (Wayne Brady) is offering to her. B&B spoilers say that Liam will inform Wyatt about this development, and that Wyatt will be stunned that Steffy is considering adoption right now.

Wyatt will have some strong opinions about Steffy’s plans, and it seems that his first thought will be for Hope. He’ll think that now might not be the appropriate time for Steffy to bring a new baby home, out of respect for Hope’s grieving process. He’ll think that it would be terribly hard for Hope to cope with Steffy getting a new baby when she just lost hers.

Wyatt may also think that Liam shouldn’t be so involved with Steffy and the baby she’s thinking about adopting, out of respect for Hope and for Beth. But Liam will probably say that Steffy’s intention isn’t to rush into an adoption, but this opportunity fell into her lap. Plus, Liam will also point out that he feels he should be a part of the process, given that his own daughter Kelly Spencer (Zoe Pennington and Chloe Teperman) is involved.

Given how right Wyatt was about Hope’s reaction to Sally’s puppy, it stands to reason that he may be right about her eventual reaction to Steffy’s adoption plan. We could be looking at a major Hope meltdown once she learns that Steffy’s planning on getting a new baby.

Do you think Wyatt’s right? Is Steffy’s adoption plan insensitive to Hope? Stay tuned to the CBS soap and don’t forget to check CDL often for the latest Bold and the Beautiful spoilers, updates, and news.