The Bold and the Beautiful Spoilers: Wyatt Drawn Back To Flo – Kidney Sacrifice Leads To Reconciliation?

BY hellodrdavis on October 8, 2019 | Comments: 2 comments
Related : Soap Opera, Spoiler, Television, The Bold and the Beautiful 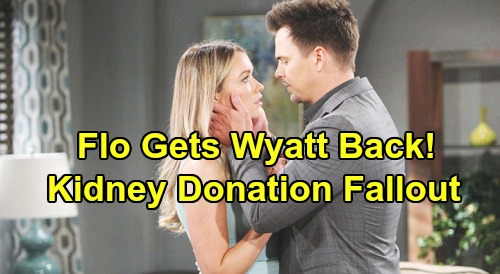 The Bold and the Beautiful spoilers tease that Wyatt Spencer (Darin Brooks) will feel compelled to express his gratitude. As B&B viewers know, he and everyone else in the family has been deeply worried about Katie Logan (Heather Tom), who is in kidney failure and in dire need of a donor kidney. Things have been looking bleak for Katie, who has been preparing herself for the horrible possibility that a donor won’t materialize.

But according to B&B spoilers, Katie will get her miracle, and it will come in form of Flo Fulton (Katrina Bowden). After being tested as a potential donor, Flo will get word that she’s a match to Katie, and the transplant process will soon get underway. Time is of the essence to save Katie, so the surgery will need to happen asap.

And despite Shauna Fulton’s (Denise Richards) idea that Flo should publicly disclose that she’s the donor in order to get in good with the Logan family, Flo will decide to keep her status as Katie’s donor anonymous. She won’t really be in it for the recognition or to make her way back into the good graces of the Logan, Spencer, and Forrester families – she’ll just want to do the right thing and save her aunt’s life.

Well, according to B&B spoilers, Flo’s anonymous donation won’t stay anonymous for long. She’ll soon find herself in a delicate position in which Katie insists on meeting her secret donor – her “guardian angel.”

One thing will lead to another, and eventually Flo’s identity will become known to Katie and the rest of the family. It will surely come as a shock to everyone at first, as now they’ll have to reconcile Flo’s devious past with the wonderful thing she’s just done.

And apparently Wyatt will want to express his personal thanks to Flo. As B&B viewers know, he’s now back together with Sally Spectra (Courtney Hope) and the two are engaged to be married. But still, Wyatt will feel compelled to go see Flo at home as she’s recuperating from her surgery. He’ll want to thank her and acknowledge her tremendous sacrifice for Katie and his family.

Will This Open Up Wyatt Spencer’s Feelings For Flo Fulton?

Of course, we can’t forget that Katie used to be in a relationship with Wyatt herself, so Wyatt’s feelings for her run deep. Sure, they aren’t together anymore and now Katie is with his dad Bill Spencer (Don Diamont), but he still cares about her and will be very grateful to Flo that she made the tremendous sacrifice to save Katie’s life.

But will Wyatt’s gratitude to Flo eventually lead him to re-think his engagement to Sally, or at least cause some friction with Sally? We think there’s a good chance it might, since it looks like Wyatt may be drawn back into Flo’s orbit. Could this development open Wyatt back up to his feelings for Flo? We could be looking at a Wyatt-Sally-Flo love triangle down the road.

What do you think? Will Wyatt get drawn back to Flo as a result of her life-saving donation to Katie? Stay tuned to the CBS soap and don’t forget to check CDL often for the latest Bold and the Beautiful spoilers, updates, and news.