The Bold and the Beautiful Spoilers: Wyatt Proposes to Lying Flo – Emma’s Death Brings Major Decision and Push for Marriage 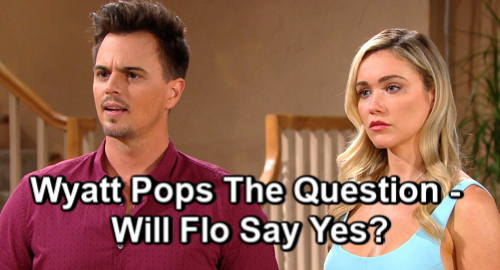 The Bold and the Beautiful (B&B) spoilers tease that Emma Barber’s (Nia Sioux) stunning death will bring major life changes to several characters. Many people will be affected due to Emma’s grim fate. The Forresters will gather along with the other core B&B families to mourn the sudden loss and try to find some peace.

Of course, the biggest lesson they can take away from this is that life is short. There’s no time like the present since tomorrow may never come – at least not if you’re standing in Thomas Forrester’s (Matthew Atkinson) way! The Bold and the Beautiful spoilers say several characters’ paths will be altered due to this death. They’ll make choices they wouldn’t probably have made otherwise.

The Bold and the Beautiful spoilers say that during the week of June 24-28, Wyatt Spencer (Darin Brooks) will make a huge decision about his future. He’ll determine that he’s ready to change his life in a big way. B&B fans can read between the lines and guess what Wyatt might be thinking. It certainly sounds like Wyatt’s about to pop the question.

Wyatt’s always been the kind of guy who falls head over heels and wants to move fast. He’ll have extra motivation to do it this time around. That horrific death may be one reason for this rushed proposal. Wyatt may realize he could croak at any moment. No one is guaranteed a long and happy life, so you have to grab joy when it comes and ride the wave as long as you can.

Plus, it’s not like Wyatt and Florence “Flo” Fulton (Katrina Bowden) just met. They started with a solid foundation based on their history. Flo and Wyatt are high school sweethearts who believe they were always meant for each other. Now that Flo is back in the picture, Wyatt doesn’t want to lose her.

Wyatt may also want to ease Flo’s mind about keeping this wonderful life she has now. She’s terrified she’ll lose it, but Wyatt doesn’t know it’s because of the baby swap scheme. The Bold and the Beautiful spoilers say Wyatt may rev up the pressure by getting down on one knee. He may ask Flo to marry him and start a new chapter together.

If Wyatt indeed proposes, will Flo accept right away or drag her feet? Will Wyatt have to work to win Flo over? That may depend on Flo’s guilt and her ability to handle it. The Bold and the Beautiful spoilers say Flo will struggle thanks to that deadly outcome. This whole plot snowballed into a nightmare, but there’s nothing Flo can do if she’s unwilling to come clean.

Flo may accept Wyatt’s potential offer of marriage eventually, which would really raise the stakes! We’ll give you updates as other B&B news comes in. Stay tuned to the CBS soap and don’t forget to check CDL often for the latest Bold and the Beautiful spoilers, updates and news.