The Bold and the Beautiful Spoilers: Wyatt Reels From Sally’s Deception – Turns To Flo For Comfort and Heavy Make Out Session

BY hellodrdavis on April 27, 2019 | Comments: 2 comments
Related : Soap Opera, Spoiler, Television, The Bold and the Beautiful 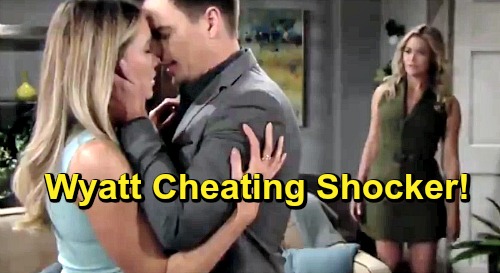 The Bold and the Beautiful spoilers tease that Wyatt Spencer (Darin Brooks) will be in for a big shock. He’s been under the impression that he and Sally Spectra (Courtney Hope) have a solid relationship, and he’s had no reason to doubt Sally’s devotion to him.

But then Quinn Forrester (Rena Sofer) ran to Wyatt with news about Sally and Thomas Forrester (Matthew Atkinson). She saw Thomas and Sally in an embrace and got the wrong idea.

Of course, Wyatt brushed off Quinn’s concern about Sally and Thomas, and he assumed that Quinn simply misunderstood what she saw. But according to B&B spoilers, Wyatt will soon discover something that will make him think that perhaps his mom is right about Sally…he’ll discover that Sally and Thomas are secretly texting each other about some “secret.”

As it turns out, Sally and Thomas do have a secret. What they’ll be texting about is Thomas’ plot to break up Hope Spencer (Annika Noelle) and Liam Spencer (Scott Clifton). Thomas told Sally about the plot in confidence, but Sally doesn’t like the idea. It looks like their texts will occur in the context of Sally trying to dissuade Thomas from his plot.

But of course, the exact wording of their texts will be vague and open to interpretation. According to B&B spoilers, Wyatt will become paranoid and upset over the texts, and he’ll assume that exes Sally and Thomas are sneaking around behind his back and having an affair.

And that will lead Wyatt to seek out Florence “Flo” Fulton (Katrina Bowden). Wyatt and Flo have shared a couple of kisses here and there, which Wyatt has kept secret from Sally, and it’s clear that there are still some feelings between them.

It looks like Wyatt will decide in all his paranoia to ask Flo out for dinner but not before Flo plants another big kiss on Wyatt on a new B&B episode May 1. Wyatt will kiss Flo back and the two will start a serious make out session until they are interrupted by Shauna Fulton (Denise Richards) – and that’s where things will start getting complicated.

According to B&B spoilers, Sally will eventually come clean with Wyatt, so it looks like she’ll tell him about what her big secret with Thomas is. But at that point, will Wyatt have already gone too far with Flo? And will Wyatt come clean with Sally about kissing Flo?

It certainly looks like there’s trouble ahead for Wyatt and Sally’s relationship. With some honesty and understanding, they’ll probably be able to work things out, but if not, it looks like Flo will be waiting for Wyatt!

Do you think “Wally” will be able to work through this conflict? Stay tuned to the CBS soap and don’t forget to check CDL often for the latest Bold and the Beautiful spoilers, updates, and news.