The Bold and the Beautiful Spoilers: Wyatt Reevaluates Sally Relationship – Just In Time For Flo To Steal Him Away

BY hellodrdavis on December 9, 2019 | Comments: one comment
Related : Soap Opera, Spoiler, Television, The Bold and the Beautiful 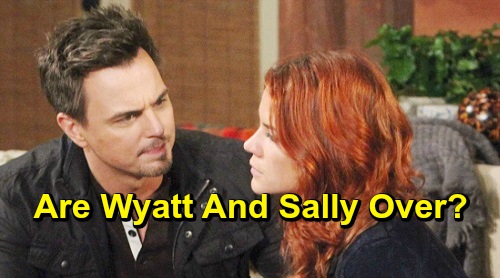 The Bold and the Beautiful (B&B) spoilers tease that Wyatt Spencer (Darin Brooks) will be feeling conflicted. As B&B viewers know, he recently got a jolt when his fiancé Sally Spectra (Courtney Hope) mistakenly called him by his brother Liam Spencer’s (Scott Clifton) name. It seemed like an innocent mistake on Sally’s part, but it really unnerved Wyatt, who declared that he was done going after “his brother’s women.”

Of course, Sally promptly pointed out that she was never “Liam’s woman,” which really should have ended the conversation. After all, Sally certainly hasn’t expressed any kind of romantic interest in Liam since a couple of years ago, when the two shared a kiss while they were trapped in the rubble of a building together. It doesn’t seem like Wyatt has ever been concerned about Sally’s past interest in Liam before, but now suddenly it’s an issue.

Well, there seems to be a lot going on underneath the surface with Wyatt. It’s been a while since he’s seen Flo Fulton (Katrina Bowden), but the last time that he did, he seemed really confused about his feelings for Sally and Flo. B&B viewers will remember that Wyatt went to visit with Flo after she donated her kidney to Katie Logan (Heather Tom), and that the two had a nice talk. It was pretty clear that Wyatt still loves Flo.

And then Wyatt seemed upset that Sally wasn’t pushing harder to set a wedding date. But he wasn’t pushing hard for a wedding date, either, and he never got Sally a ring after proposing. Sally didn’t seem bothered by this and had a pretty carefree attitude about their pending marriage, but Wyatt made a big deal about it. It was almost like he was looking for a problem in his relationship with Sally…and he probably was.

In fact, everything that Wyatt has been accusing Sally of doing (or not doing) is something that Wyatt himself seems to have done (or not done). He was aggravated at Sally for not pushing harder for a wedding date, but he hadn’t pushed either. And he flew off the handle when Sally accidentally called him “Liam,” yet Wyatt seems to be the one who is hung up on his feelings for someone else. Then when Sally proved she wanted to be married by suggesting a quick elopement, he refused.

None of this bodes well for “Wally’s” relationship going forward, and according to The Bold and the Beautiful spoilers, Wyatt will soon be reevaluating his relationship with Sally. He’ll sit down with Liam for a heart-to-heart talk about why things with Sally seem so complicated lately. We’ll see if he ends up telling Liam the part about Sally accidentally saying his name, but at any rate it looks like he’ll open up to his brother.

Perhaps Liam will be able to see what Wyatt can’t see right now – and that’s that his own feelings are what is causing his “reevaluation” of his engagement to Sally. Wyatt really needs to get honest with himself and realize that the real problem here is that he still has feelings for another woman, and that he’s looking for problems stemming from Sally when the problem is him.

Well, soon, we’ll be seeing Flo back in action, once she’s recuperated from her kidney surgery. Since Katrina Bowden, who portrays Flo, has been off filming a movie, she hasn’t been seen on screen lately. But that will change shortly, and we’ll soon see Flo back in action. And given that Flo is still very much in love with Wyatt, she may try to pursue him. At any rate, we should see her back in Wyatt’s orbit soon, which may confuse him more!

Do you expect to see Wyatt go back to Flo? Stay tuned to B&B and don’t forget to check CDL often for the latest Bold and the Beautiful spoilers, updates, and news.