The Bold and the Beautiful Spoilers: Xander Bursts In Liam and Hope’s Annulment Meeting To Blab About Beth, Save Marriage

BY Heather Hughes on May 28, 2019 | Comments: 3 comments
Related : Soap Opera, Spoiler, Television, The Bold and the Beautiful 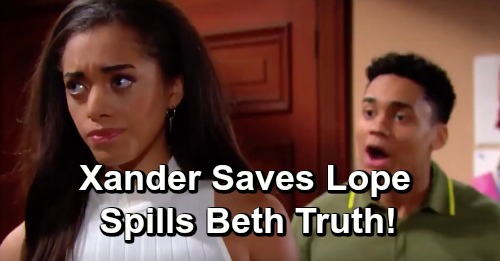 The Bold and the Beautiful (B&B) spoilers tease that Xander Avant (Adain Bradley) will find himself on an urgent mission. On May 27, Xander will overhear at least part of the truth about Beth Spencer. He’ll listen in on Zoe Buckingham’s (Kiara Barnes) conversation with Florence “Flo” Fulton (Katrina Bowden), which will lead to an intense faceoff.

During the week of June 3-7, Zoe will crack under the pressure. B&B spoilers say Xander will be shocked and appalled by Zoe’s big secret. He’ll realize Dr. Reese Buckingham (Wayne Brady) stole Hope Spencer’s (Annika Noelle) baby and used Flo as part of his adoption scam. Naturally, Xander will want to blab right away. He’ll be appalled with Flo and Zoe for keeping this secret so long.

However, Zoe will try to make Xander understand what a complicated situation this is. This goes beyond Zoe, Flo and even Shauna Fulton (Denise Richards). Steffy Forrester (Jacqueline MacInnes Wood) adores “Phoebe Forrester” (River Davidson and Madeline Valdez) and would be crushed if she had to give her up. Zoe may insist they’ll just be trading one broken heart for another one.

Xander still won’t think it’s right to leave Beth’s biological mother in the dark, especially since Hope’s been drowning in so much grief. The fact that Hope and Liam Spencer (Scott Clifton) are splitting up will only add to Xander’s guilt. He’ll be latest secret-keeper facing a terrible dilemma.

The Bold and the Beautiful spoilers say Hope and Liam will eventually meet to sign some legal documents. They’ll settle on an annulment and take the painful next step. Just before Liam and Hope put pen to paper, Xander will burst in with something to get off his chest! He’ll insist that they can’t do this, but he obviously won’t go through with telling them why.

This secret will won’t be divulged until at least the end of summer, so Xander will have to come up with another excuse for barging in. Still, Hope and Liam are sure to think this is awfully weird! It may serve as a clue if new ones emerge later.