The Bold and the Beautiful Spoilers: Xander’s a Murder Target – Will Thomas Take a Dark Turn to Silence New Beth Secret-Keeper?

BY Heather Hughes on May 25, 2019 | Comments: Leave Comments
Related : Soap Opera, Spoiler, Television, The Bold and the Beautiful 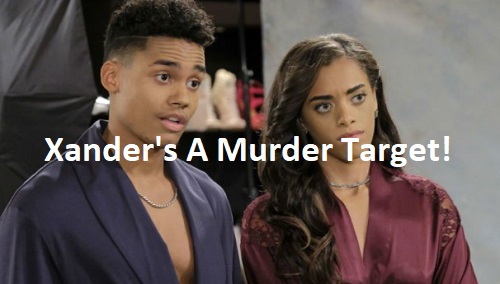 The Bold and the Beautiful (B&B) spoilers tease that the baby swap storyline is about to head in a dark direction. B&B fans can expect some shocking developments as this hot plot gets even hotter. For starters, Xander Avant (Adain Bradley) will make a horrifying discovery and it could ultimately put a target on his back.

Zoe Buckingham (Kiara Barnes) had concerns about keeping Beth Spencer’s survival a secret early on, but she convinced herself it was the only way. She certainly doesn’t want Dr. Reese Buckingham (Wayne Brady) to land in prison for his crimes. Zoe doesn’t particularly want to end up in trouble either. She’s been helping Reese hide the truth for months, so she’s in too deep.

Nevertheless, Florence “Flo” Fulton (Katrina Bowden) will continue to battle guilt over her part in the scheme. The Bold and the Beautiful spoilers say that guilt will rev up due to “Lope’s” divorce. Once Flo finds out Liam Spencer (Scott Clifton) and Hope Spencer (Annika Noelle) are calling it quits, she’ll tell Flo they have to come clean. They’ll be debating the idea when Xander overhears some stunning info.

Xander will flip out when he determines that Beth may actually be alive and well. He’ll confront Zoe, who will probably be forced to spill all. Xander knows Zoe’s been tormented by something for a while now, so everything should click into place. However, that doesn’t mean he’ll think Zoe’s actions are justified.

Zoe has let a mother grieve the loss of her child while standing by and doing nothing. That could definitely change how Xander views her. Even if he decides he understands Zoe’s perspective, he poses one more threat to the secret. From that point on, Xander will have to feel guilty, too. That’s not an easy position to be in – even for someone like Thomas Forrester (Matthew Atkinson).

After Xander, word has it Thomas will become the next person to learn about Beth. He surely won’t want to throw away his chance with Hope by revealing the truth. That’d mean handing her back to Liam on a silver platter. When you add that mentality to Thomas’ crazy tendencies lately, we have to wonder how far he’ll go to keep this quiet. We wouldn’t put violence past Thomas at this point.

Some Bold and the Beautiful fans have been rooting for Thomas to become a full-blown psycho. Her certainly isn’t some romantic hero, so they might as well take this route. Could Thomas kill Xander to silence him? It’d be a fascinating layer to this storyline, so it’s worth pondering.

B&B viewers will be eager to see how the darkness takes over later this summer! We’ll give you updates as other news comes in. Stay tuned to the CBS soap and don’t forget to check CDL often for the latest Bold and the Beautiful spoilers, updates, and news.