The Bold and the Beautiful Spoilers: Zoe Sabotages Thomas’ Progress with Hope – New Triangle Brewing as Liam Reunites with Steffy? 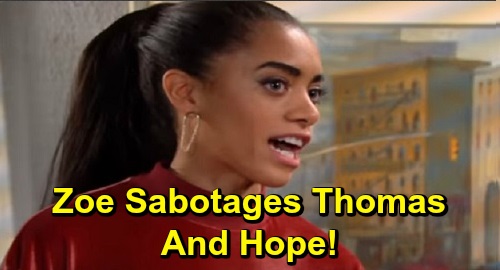 The Bold and the Beautiful (B&B) spoilers tease that Thomas Forrester (Matthew Atkinson) may be in luck. He seems poised to genuinely pull Hope Logan (Annika Noelle) closer like he wants, especially since Liam Spencer (Scott Clifton) has been drifting toward Steffy Forrester (Jacqueline MacInnes Wood). B&B is clearly inching toward a “Steam” reunion, so we’ll see more moments of bonding and longing looks between them.

What does that mean for Hope? It means she’ll likely inch further into Thomas’ orbit, which should leave him on cloud nine. The Bold and the Beautiful spoilers say Thomas will do everything he can to show Hope that he can be the man she needs. He’ll start by trying to convince Hope that they should be a team at Forrester Creations.

Of course, we have to wonder why B&B brought Zoe Buckingham’s (Kiara Barnes) crush into the story. Is that something that’ll just be dropped or were they laying the groundwork for what would come later? Thomas wasn’t very affected by their kiss since he only has eyes for Hope. Zoe could easily become the female version of Thomas in a way. Her crush could grow into an obsession and spark some trouble.

After all, it wouldn’t be the first time Zoe was obsessed with someone. Many Bold and the Beautiful fans thought Zoe was poised to be the infatuated crazy character when she first came on. Zoe was hung up on Xander Avant (Adain Bradley) and did whatever she could to reunite with him.

Word has it when Zoe comes back on the scene, she’ll do so in a big way. If they’re going to settle Thomas down and make him a bit more stable, that leaves the door open for someone else to come unhinged somewhat. Zoe might fit the bill here. Even if she doesn’t head down a crazy path, Zoe could still try to sabotage Thomas and Hope’s budding romance – which indeed appears to be what B&B’s aiming for.

Zoe could turn this into a real love triangle or she could just be another obstacle in the way of “Thope.” Regardless, there’s a good chance we’ll see Hope set up in a story cluster with Thomas and Zoe while Liam ultimately ends up back with Steffy.