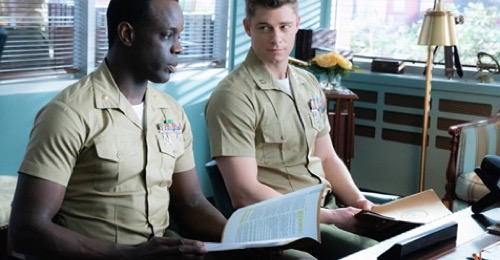 Tonight on CBS  their new series  “The Code” airs with an all-new Monday, July 1, 2019 episode and we have your The Code recap below. On tonight’s The Code season 1 episode 9 called, “Smoke-Pit,” as per CBS’ synopsis, “Abe and Harper’s investigation into a Marine recruiter’s alleged misconduct may be derailed when the key witness refuses to testify.”

The Code Season 1 Episode 9 airs at 9 PM – 10 PM ET on CBS.  Make sure to bookmark this spot and come back for our The Code recap!  While you wait for the recap make sure to check out all our television recaps, news, spoilers & more!

Tonight’s The Code Recap begins now – Refresh Page often to get the most current updates!

A staff sergeant by the name of Julian Lucas speaks with some high school students about joining the military. In between his recruiting, he continues to speak with a young girl under 18. He sets his sights on a young man Steve who seems troubled.

Just as Lucas gets ready to swear in Steve he is apprehended by his superiors and charged with rape. He is accused of raping a young female he was trying to recruit.

Turnbull shares the details of the case of Lucas with Trey, Dobbins, Harper, and Abe.

Trey and Abe meet with Janet and her parents to get details about her relationship with Lucas. Later, they meet with Lucas who says he never went through with having sex with Janea at a hotel. Trey asks for access to his email account and texts so they can go through it.

Trey asks Abe how long he is going to keep his relationship with Alex Hunt. Abe doesn’t want to talk about it. They continue to go through Lucas’ emails. It appears he has been inappropriate with more than just Janea.

Abe and Harper catch up. She has been busy with her wedding and out of town but she still wants to help. Her fiancé isn’t happy.

Maya meets with brother. She interrupts his political campaign to get him to take his medicine. He doesn’t like the side effects and thinks someone is monitoring him so he stopped.

Abe meets up with Harper. He tells her he swears someone was following him last night. They move on to the case. Harper has discovered Lucas like racist music. Could he be into white power?

Abe meets with Trey and Lucas and asks Lucas about his possible support of the KKK. Abe also has him connected to an assault at a rally. They meet with Turnbull who tells Lucas he has to have proof Lucas was at the rally.

Harper talks with her fiancee. She wants to be his wife but doesn’t like the whole wedding thing.

Abe finds a sociology professor who wrote a paper on an assault she witnessed at the riot that Lucas was at.

Maya checks in with her brother. She asks him if he thinks he should be running a campaign knowing that he is mentally ill. He has a delusional disorder and says he can manage it.

Trey gives Abe video footage of Lucas at the rally. He tells Abe not to disclose where he got it from.

Trey and Abe speak with Turnbull about the video as Harper and Maya call in. Harper plans to track down the woman who was attacked.

Abe heads to Alex’s. He swears he saw the car that has been following him. It pulls up when enters the house. He runs out and videos the car. The next day he tracks down the plate. It looks like he is being tailed because he is a witness in a bigger case.

Maya and her brother have a heart to heart before he heads out on stage for a debate. She tells him he isn’t alone with this.

Harper calls Abe. She found the woman Lucas assaulted. Unfortunately, she died months ago in a car accident.

After the debate, Maya’s brother is shown lots of support. Meanwhile, Trey represents Maya in court on Lucas’ behalf as Abe fights against them. The case against Lucas is dismissed since there is no witness or victim.

Abe pays a visit to Janea. He tells her about Lucas and his white power beliefs. She is upset but believes him. Later, Janea presses charges. Lucas is taken into custody.

Harper wants a fast wedding. Her fiance doesn’t just as they head out to wed alone. They aren’t sure what to do and where they go from here. Abe returns home to see Alex. She shares that he is being followed because she is suing the Marine core and Abe is the star witness.