BY hellodrdavis on May 5, 2019 | Comments: 6 comments
Related : Days of Our Lives, General Hospital, Soap Opera, Spoiler, Television, The Bold and the Beautiful, The Young and the Restless 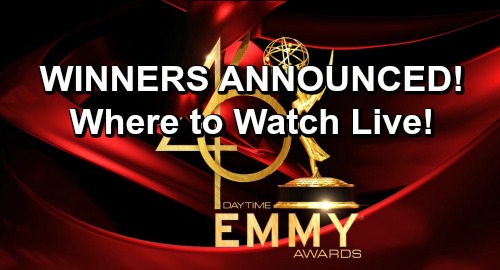 As many soap opera fans know, the 46th annual Daytime Emmy Awards are taking place on Sunday, May 5, beginning at 8pm Eastern. The ceremony will take place at the Pasadena Civic Auditorium in Pasadena, California, and will be hosted by Mario Lopez and Sheryl Underwood and CDL will have live updates with all the Daytime Emmy Awards winners.

In addition, fans will be treated to a Red Carpet Pre-Show and Backstage Post-Show, which will include interviews with the attendees and winners. The host for the pre-show and post-show will be Carolyn Hennessy (Diane Miller, GH).

However, the awards show, pre-show, and post-show won’t be broadcast on regular TV, so fans of the four daytime dramas will need to watch the broadcasts online via live-stream. Despite the millions of people who watch The Young and the Restless, The Bold and the Beautiful, General Hospital, and Days of Our Lives none of the larger TV networks or cable channels airs the show – go figure!

Here’s Where You Can Tune In To Eee The Live-stream Show:

In addition, the Daytime Emmys will be broadcast live on the Knekt TV Network, which is available on Apple TV, Roku, and on iOS and Android devices. To watch the Daytime Emmys on Knekt TV, you must download the app from an Amazon Fire device.

The Daytime Emmy Nominees For The More Popular Categories Are As Follows:

Best Drama Series:
The Bold and the Beautiful
Days of Our Lives – Our Pick!
General Hospital
The Young and the Restless – WINNER ANNOUNCED!!

Be sure to tune in on Sunday, May 5 for the festivities. You’ll want to catch what your favorite actors and actresses are wearing at the Red Carpet Pre-Show, find out who wins, and then catch the Post-Show interviews! Note that we will return to update this post as soon as more results are in! Don’t forget to check back with CDL for all the latest entertainment news and updates.