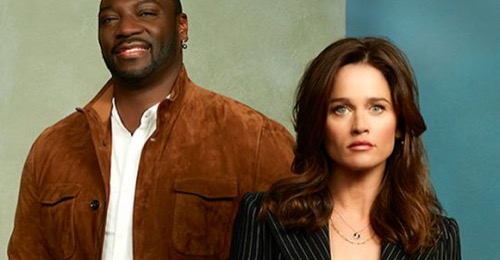 Tonight on ABC their new legal drama The Fix airs with an all-new Monday, March 18, 2019, episode and we have your The Fix recap below.  On tonight’s The Fix season 1 episode 1, “Pilot”  as per the FOX synopsis, “The series premiere: Maya Travis, an L.A. district attorney, suffers a devastating defeat after prosecuting an A-list movie star for double murder. With her high-profile career derailed, she flees for a quieter life in rural Washington.

Eight years later, when this same star is under suspicion for another murder, Maya is lured back to the DA’s office for another chance at justice.”

The Fix season 1 episode 1 airs at 10 PM – 11 PM ET on ABC. Make sure to bookmark this spot and come back for our The Fix recap! While you wait for the recap make sure to check out all our television recaps, news, spoilers & more!

The Fix begins tonight with Maya Travis (Robin Tunney) stopping on the side of the road to take a call, learning that the murder trial of Sevvy Johnson (Adewalke Akinnuoye-Agbaje) if coming to an end after 8 grueling months. Ezra Wolf (Scott Cohen) tried to paint the story as a case of racism; Maya Travis found back to find him the movie star guilty of two murders, Maya and Ezra meet in the elevator before being surrounded by an angry mob, rooting for both sides. The verdict is read and the jury finds Sevvy not guilty on all charges; devastating Maya.

At home, Maya Travis reviews the photos of her victims and the murder scene, frustrated at the loss. Her assistant, CJ (Merrin Dungey) tries to assure her that she did everything she could, but she doesn’t feel that matters.

Maya is enjoying horseback riding when she finds Riv (Marc Blucas) in the barn with the new cold that was just born. She seems to be thoroughly enjoying farm life when she spots Matthew Collier (Adam Rayner) on her front porch, revealing, “He has done it again!” asking her to come back and promising this time they will get him.

The media outlets are revealing that Jessica Meyer (Taylor Kalupa), the girlfriend of Sevvy Johnson was found five days earlier bludgeoned to death. In the corner of the TV screen, Ezra recognizes Sevvy and rushes out of the bar; just as Maya makes her way back to LAX. She is sure she is going to only stay for a couple of days, confessing she cannot get his former victims out of her mind. She can’t go any further than looking through old case files and says she will not go through this again.

At the funeral home, both Star Johnson (Casten Harmon) and her brother, Gabriel (Alex Saxon) are sure he is innocent. He doesn’t like how her family is looking at him. Matthew brings Maya back to her old place where she immediately finds her gun. Ezra pulls Sevvy away from Jessica’s family; saying he is making a scene and the best advice he could take is go home and stay low.

Matthew and Maya review their case files when Matthew asks her to check out Loni Kampoor (Mouszam Makkar). She refuses to go back into the DA office, she admits she is still a lawyer and knows the rules. He admits it is great to see her as she notices that he got married to Effy (Daniella Alonso), the reporter. She reveals she is with a cowboy but they are not married.

Sevvy watches the news but tells his baby girl, not to listen to the news as it is people just talking, Matthew will with witnesses, but all he wants is for Maya to find him something; just as she questions if he really thinks Sevvy is stupid enough to kill again. Just then he gets a call from Sevvy who is at the precinct willing to answer any questions. He says he is there without counsel as he doesn’t want them wasting time on him while the real killer is out there. He says Gabe doesn’t believe he killed his mother, Jessica as he knows he loved his mother. Maya feels they are getting nowhere in interrogation and having Matthew a piece of paper, saying it will definitely shake things up.

Questioning continues as they want to know if he ever hit Jessica, wondering if she cheated on him. He tells the officer to “piss off”. He starts to laugh and walks up to the one-way mirror, asking if Maya is back there and she will never get him as he is an innocent man!

Sevvy grabs Ezra, saying he cannot go back to jail; meanwhile, at home, Maya watches an interview between Sevvy and Jessica. She calls Matthew saying she is coming back, shocked to learn that Alan Wiest (Brecklin Meyer) is the current DA. Many people are not thrilled she is there but Matthew says he is the lead on the case. In their meeting, Maya reminds them that Sevvy had 8 years to think of his mistakes and he definitely won’t make the same ones again. They are checking for blood, DNA and surveillance. CJ says she came in to check Ben Mitchell story but so far things are checking. Maya wants them to observe the googly eyes, which shows Jessica looking to see if what she is saying is approved and desperately avoiding conflict. Maya says Jessica was simply a decoration in his house, just like his wife before.

Maya feels none of this feels good, but Matthew begs her for a few weeks to help him get Sevvy into jail. Ezra meets with his law firm and says their life is completely his until they prove Sevvy is innocent, and all the idiots on social media could either be for them or against them. He introduces them all to Ares Ahn (Abraham Lim) saying he is their guru; so they need to get the jury to like them; making American fall back in love with Sevvy Johnson.

Maya comes to see CJ, who is checking Jessica’s pings on her cellphone. There is no storage unit, but Maya knows CJ is pissed off at her for leaving LA; they were supposed to be “ride or die” and she simply vanished on her. She wants to know if Sevvy took Jessica to Bora Bora as that is always his first makeup gift after he gives his woman a severe beating.

Mr Meye stops Maya in the streets, asking if she is there for his daughter. She offers her condolences, but he knows she is there if Sevvy is the one who murdered his daughter. He doesn’t want her anywhere near this case because had she won the last case, his daughter would still be alive.

Maya’s confrontation with Jessica’s father is all over the news, as Matthew doesn’t think this will convince her to stay. He admits she has been through a lot, even though she ran. His girlfriend feels he can’t be the fall guy if this all goes South.

Maya goes to the ocean where she calls Riv, telling him she misses him. Ezra is confronted, saying he can tell his bosses that his cash cow is coming in and the bosses will be paid in full. Ezra is whacked with a crowbar, reminding him that next time won’t be so nice. Maya is able to get through the paparazzi while Wiest is presented with a photo that proves Mitchell and Jessica’s relationship was not all business. CJ is told to dig into it further and to show the photo to Matthew and Maya, but she says she will only show it to Matthew. Wiest says that before Johnson’s trial, Maya used to be fun.

Cj watches the video and notes Star’s name. Maya is suddenly awakened by a loud noise, she retrieves her gun and approaches the door; finding Riv, who was simply worried about her. He admits to seeing the news, holding her as she reveals last time the media was so much worse.

Sevvy meets with CJ, who talks about their first house and how they raised three kids in that house. She says a detective came by her house and left her something, just like last time as they always want to talk to the ex. He swears he didn’t do it but she feels he didn’t just like he loved, her and Cassandra before her.

Riv and Maya wake up together; he says they have a good 7 hours before their flight and she could show him the Hollywood sign. She admits that they asked her to stay but this it, not the world she wants to be in. The doorbell sounds and she thinks it is a reporter, planning to open the door with a mean face. CJ reveals that Jessica did hide things but simply not under her name. They find Star, who says Jessica had a storage locker in her name. Maya wants Sevvy to be innocent, reminding her that she doesn’t need to do anything wrong to feel guilty.

Ezra holds a press conference, while Star gives CJ and Maya access to her storage locker. Ezra says hehe won 8 years earlier and this is simply a vendetta to get him back. The Mayor wants to see Wiest, who tells his receptionist to tell him that he isn’t there. Maya and CJ open the storage locker as Wiest says Ben Mitchell is the killer and the only reason he got off his because he was a white man. May and CJ find evidence in the locker, including a video of Jessica with bruises all of her face and her admitting he did it again. She says her dad tried to warn her as she reveals the bruises all over her belly and back; Maya says that probably causes and Matthew says he is getting a warrant.

Maya returns home, telling Riv she can’t leave until this is over. He worries if she takes this on again, he will lose her as this isn’t her fight. She feels she needs to do this for all of Sevvy’s victims. He asks her why she never sold the house, believing she kept it because she is not done there. He begs her to get done so she can get home to him. She kisses him as she promises she will.

Cj comes to see Wiest, informing her that Maya is staying but she is the lead prosecutor and everyone else is fully on board. CJ says she looks forward to working with her. Maya orders everyone to tear the place down to the studs without making any mistakes. Ezra calls Sevvy, ordering him to get rid of anything he doesn’t want them to find before they get there; Ezra thanks CJ for everything, saying he owes her one. Sevvy gives Gabriel Johnson something to get rid of before the police arrive, all too willing to let them in.

Several people working for Sevvy get rid of various evidence in different places so they cannot find it. Ezra stands with Sevvy as CJ, Matthew and Maya face him. Maya asks him, “Miss me!”