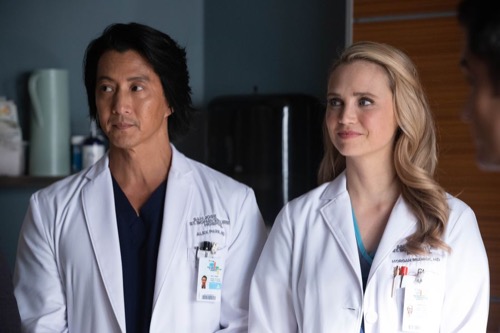 Tonight on NBC their new medical drama “The Good Doctor” airs with an all-new Monday, December 2, 2019, episode and we have your The Good Doctor recap below. On tonight’s The Good Doctor season 3 episode 10 called, “Friends and Family” as per the ABC synopsis, “Dr. Shaun Murphy visits his father on his deathbed and the reunion reveals unexpected results.

Aaron talks to Shaun about his parents. His father is dying. Shaun says he will see him hear what he has to say as long as he can bring Leah.

Neil and Claire are at the gym when they see a defensive tackle for the NFL push himself too hard with weights. He collapses to the ground and screams that he can’t feel his legs. They call 911.

Leah and Aaron argue a little bit about her going. He tells her it’s going to be emotional but she’s up for it.

Back at the hospital, the team looks over the NFL player as he goes into a scan. They discover he has broken in the spinal column. Meanwhile, Aaron tries to talk Shaun into calling Carly to tell her that he left town.

The NFL player’s entourage comes in with another doctor. They try to talk him into having surgery with somebody else other than Neil.

Outside of his parent’s house, Shaun sees his mother and becomes very frustrated and upset. He demands they leave now. Aaron pulls the car out of the driveway and they head to the hotel.

At the hotel, Leah comfort Shaun. He knows who he wants to see. They head to the cemetery where he visits the grave of his brother. Shaun decides he’s ready to go and see his mother and father. They arrive at the house. Meanwhile, the team is in the OR performing surgery on the NFL player who goes into bradycardia. Neil is forced to stab him with a large-bore needle, returning him to normal sinus rhythm.

Shaun sits with his father who apologizes. He always wanted a son he could play with and fish with. But he is proud of the man that Shaun has become. He tells him he loves him. Shaun becomes angry, yelling at his father for killing his rabbit and his brother. For being a bad person and drinking too much beer and not being nice.

Shaun, Leah, and Aaron end up at a bar. She talks Shaun into going down the street to do a polar bear plunge. Aaron is annoyed.

The team meets with the NFL player post-surgery. He admits he chose them to perform the surgery because they didn’t care if we ever play football again. He admits that he hates football and always has been pursued the game and became the best to make money to take care of his family.

At the lake down the street, Leah jumps in. Shaun does not want to go in but after she dives in and doesn’t come up right away he gets scared. Shaun takes off his shoes ready to dive in. Leah jumps up from under the water laughing. It was a cruel joke, he tells her. Later, Aaron comes to Leah to tell her that this whole trip was a bust. He opened old wounds for Shaun and it was a total waste.

Shaun sits in his hotel room with mud between his toes thinking about the time that he wouldn’t cross the stream while he and his brother and his father were out on a hike. His father picked him up to help them across because he didn’t like the mud. He scraped his father’s face and his father did nothing.

The next morning at the diner Shaun’s mother shows up. They talk. Meanwhile, the team works on the NFL player again, placing the rods and screws in his spine.

Shaun’s mother tries to explain why she stayed with his father. She loved him but not more than her boys. She wanted them to be a family. But she was young and didn’t understand a lot about what Shaun needed. But she knew what she could give to her husband and it was enough. He lets her hug him. He returns to the table and tells Aaron and Leah that he needs to talk to his dad.

He goes to see his dad. The beginning of the conversation is pleasant until telling his dad explodes in anger. His mother tries to explain that he is delirious from the morphine. Shaun stands there and shakes while Aaron tries to get him out of there.

Back at the hotel, Aaron tells Shaun that his dad died 30 minutes ago. Shaun pretends to be tired so he can be alone.

Claire calls somebody to meet up with them later tonight. Meanwhile, the NFL player finally decides to tell his mom the truth. Claire arrives at the door of a therapist. Leah comes in to find Shaun hurting himself, she hugs him from behind to make him stop and then holds him while he cries.