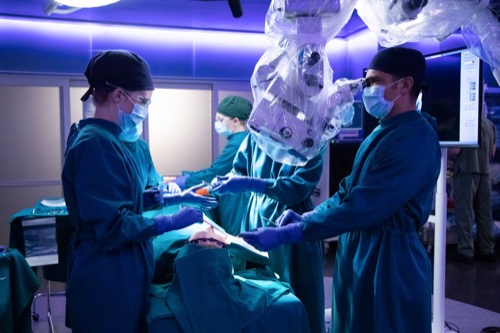 Tonight on NBC their new medical drama “The Good Doctor” airs with an all-new Monday, February 4, 2019, episode and we have your The Good Doctor recap below.  On tonight’s The Good Doctor season 2 episode 143 called, “Faces,” as per the ABC synopsis, “Dr. Andrews tries to convince a grieving family to donate their teenage daughter’s face to another young girl whose face was horribly disfigured in an accident”

Dr. Shaun Murphy took time away from work to look after his friend/foster-father. Of course, Glassman didn’t appreciate having a babysitter. He tried to convince Shaun to go back to work and when it didn’t work he planned on just living out his day as best as he could. Its why he turned to his little friend called Mary Jane. He was prescribed medicinal marijuana and had to explain himself before Shaun would even allow him to take it. Glassman was a lot more relaxed once he took his prescription and he let Shaun have some. Shaun wasn’t needed at work and he wanted to know what it was like to be on them because he heard that they helped someone who desperately needed them. And so he wanted to test them as part of the experiment.

Shaun wasn’t expecting to have munchies as anybody else would. He was fine one moment and then craving the open can of peas in the fridge the next, but Glassman stopped him from eating what was most likely expired food. He diverted Shaun’s attention by telling him about Mallomars. Glassman told him that there pieces of ooey gooey chocolate goodness and got Shaun interested in trying out those as well. Though taking an Uber for their Munchie Quest was turning out to be expensive and so their driver put her foot down. She told them that she could take them back home and get the pizza. They didn’t want pizza and so she asked them what is that they do want. Shaun wanted pancakes and Glassman just didn’t want to go home at all.

Shaun was too high to ask why and so the driver did it for him. She asked Glassman why he didn’t want to go home and the former doctor admitted that he has a secret crush on a girl he met at high school. He revealed that eating Mallomars reminds him of her and so his quest for true love interested the driver. She decided to take pity on Glassman and she helped him go down memory lane in search of a woman he hadn’t seen in decades. Meanwhile, back at the hospital, things were a little bleaker. There had been a nasty accident involved Shannon Tindle and her daughter Karin. Karin was only fourteen and had been asleep in the back of the car when their vehicle was hit by another.

Shannon walked away with a few scrapes and it had been her daughter that got all the injuries. Karin’s heart and brain both needed assistance. The doctors had to decide on which to fix first and they chose the heart, but by the time they began surgery, her brain had lost all function. She was brain dead and it was devastating for her mother. The poor woman lost her husband three years ago and now she’s lost her baby. But the doctors knew that Karin’s death could mean so much power to people on the donor’s list and so Dr. Andrews approached the grieving mother. He told her how Karin was the perfect fit for another young girl who needed a face implant and at first Shannon didn’t like that idea because she didn’t want to see her dead daughter’s face on someone else.

Then she met the girl in question. Molly was funny, sarcastic, and she’s had to deal with a lot since she lost most of her bone and facial tissue in an accident of her own. She deserved a normal life and she wasn’t going to get another opportunity if Shannon persisted in rejecting a face implant. So Shannon changed her mind. She decided to let go of her daughter and give someone else’s child a chance. Karin’s face was later removed and Karin was allowed to die. The face was then taken to Molly’s surgery that Andrews warned it would take hours. They had to begin reattaching facial nerves and things that Molly had lost before and would have to get used to. And so this very complicated surgery didn’t need her doctors falling apart.

Dr. Lim and Dr. Mendez had argued about Karin. Mendez chose to follow Lim’s suggestions by focusing on the heart and Lim believes he only did so because they were sleeping together. She also came to resent how much Mendez was reassuring her that what happened to Karin wasn’t her fault because that made her believe that he secretly did blame her. Lim and Mendez got into an argument about whether he would have stuck with the same decision if they weren’t together and the answer was never going to be what Lim wanted it to be. She blames herself and so she lashed out at her pseudo-boyfriend because it was easy. And so the doctors had been benched for parts of Molly’s surgery until they could approve they can work together.

Afterward, though, it had all been worth it. Molly’s surgery had been a success and she woke up to a face she didn’t feel ashamed of. She also got to find out more about Karin’s life. Karin’s mother Shannon had stuck around and she bonded with Molly’s parents. Molly’s parents blamed themselves for what happened to Molly because they didn’t keep a closer eye on their gun and one day Molly had gotten to it without their knowledge. The daughter lived and so they knew they should have been grateful, but it was hard not to blame themselves for what happened when they feel that as her parents they should have been the ones protecting her. And in admitting that, the parents were able to help Shannon through her own guilt because she thought she was to blame for Karin’s death.

The truth was there is no blame. What happened was an accident and so Shannon soon handed over a few photos of her Karin that Molly asked for. Molly understood the sacrifice that got her face and, in being remembered, Karin got live on.

Now the boys trip to track down a lost love hadn’t ended how they planned because they had to drive several states away to see this crush, but Glassman finally got the chance to apologise to his first love. She had been all he ever wanted and he wrote something nasty in her yearbook as punishment for not liking him back. It had taken time and maturity for Glassman to realize that he had been wrong. So he finally delivered that apology that he’s been holding in all these years and needed drugs as well as a tenacious driver to work through.