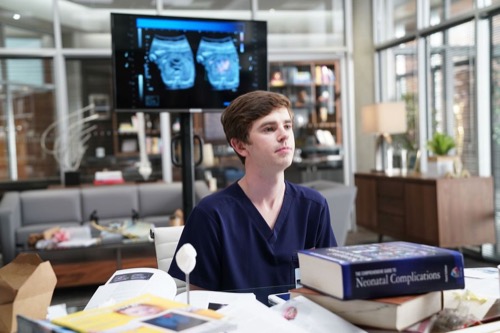 Tonight on NBC their new medical drama “The Good Doctor” airs with an all-new Monday, February 18, 2019, episode and we have your The Good Doctor recap below. On tonight’s The Good Doctor season 2 episode 15 called, “Risk and Reward,” as per the ABC synopsis, “Shaun’s blunt honesty with a distraught mother of a critically ill newborn baby causes the new chief of surgery to question keeping him on as a resident.”

Shaun and the team work on a newborn with a bowel obtrusion. The new chief Jackson Han scrubs in with them. After the surgery Han introduces himself to Neil. He promised a patient the two would scrub in together on a surgery. Neil is annoyed.

Aaron arrives at chemo and meets a young man who is receiving treatment next to him.

Neil meets with a successful patient for the chief who tells him he is in good health. The man wants a full work up. His dad was also healthy until he dropped dead on his daily jog. During his assessment, they find what they believe is a tumor.

The parents of the newborn approach Shaun. They don’t know why their baby has all of these defects. The mother thinks it is because she took a prescription for depression for the first 6 weeks of her pregnancy. Shaun tells her that could be the cause.

Neil breaks the news to the patient that he has a tumor that could be cancer. The man tells him he isn’t going to panic yet.

The chief approaches Shuan angry about his talk with the parents. Meanwhile, Aaron gets sick at chemo while his new friend tries to talk to him.

The chief comes to see Neil who is trying to do a practice run on tumor removal for his patient. He hits a nerve in the simulator. He is nervous to perform the biopsy. It is too dangerous. Later, he tells the patient who wants to think about it.

Chang tells Shaun he may want to be quiet around Han for a while. They hear code blue in the NICU and run there. After getting the baby on the support they all meet to discuss what they can do. Shaun comes up with a viable heart repair option but Chang reminds them that the baby still has abdominal problems.

Aaron arrives at another day of chemo. His friend is back but the lady who normally sits to his right hasn’t arrived. It makes him think after the man mentions she could be dead.

Neil tells his patient he thinks he shouldn’t have the biopsy. Meanwhile, Chang and Han tell the parents of the newborn that if they fix her heart they most likely cannot fix her stomach. She would starve to death. They could shut off her machines and let her die peacefully and quickly. The parents argue about what is right.

Lim and Han meet with Marcus. The parents will have a judge decide what to do with the baby since they cannot. The judge wants a recommendation.

Shaun meets with Aaron who talks about the kid at chemo who wants to be everybody’s friend. Shaun vents about Han and what he should do.

Han and the team will move forward with the surgery on the baby. They tell the parents. The dad isn’t happy.

Han and the team start surgery on the baby. Lim thinks she may have an idea to fix the abdomen. Meanwhile, Neil is in surgery on his patient when he sees he cannot access the tumor. He decides to go in from the back. Shaun’s heart plan doesn’t work in surgery. They manage to fix the abdomen but end up at square one. They tell the parents who are willing to see them try again.

The team enters into surgery, working on the newborn. Shaun has a thought that they need to check the valve and it would reduce the pressure on her lungs.

Aaron arrives at chemo and decides to socialize with the other cancer patients. They play cards and talk.

Neil checks with his patient when he wakes. He tells him he did get the tumor after getting past a nerve. He will walk with a limp.

The newborn comes through the surgery successfully. The team watches as the parents hold her smiling.

Neil throws out the biopsy report on his patient, telling the others he cannot put the tumor back. Han tells Shaun he is moving him to pathology. He doesn’t great work but he has communication issues. Shaun isn’t happy.