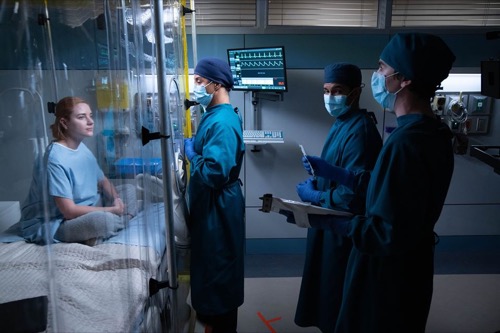 Tonight on NBC their new medical drama “The Good Doctor” airs with an all-new Monday, November 11, 2019, episode and we have your The Good Doctor recap below. On tonight’s The Good Doctor season 3 episode 7 called, “SFAD” as per the ABC synopsis, “Dr. Shaun Murphy’s unique ability to relate to a patient isolated by an immune deficiency yields an unexpected result.

Sean gets a text from Carly notifying him that she is at a conference meanwhile Audrey has made Neil breakfast to try to cheer him up over the loss of a patient.

Claire and Morgan meet with a young boy who is headed into surgery. He is going blind and deals with his health issues with sarcasm and humor. It surprises them. Sean and the others meet with a teen girl who is literally inside a bubble.

Sean talks to the girl in the bubble named Tara, she is a SCID patient. She’s been admitted Due to an infection in her tissues that are causing her breathing issues. She knows the drill and what they need to do, she’s been through this before. She tells them that she won’t be having any visitors because people seem to be a problem for her.

Claire and Morgan go to see their young patient Charlie who it seems has ordered an Uber ride and has taken off from the hospital. They don’t want to tell the parents so they pretend that he is at imaging while they go to track him down. Sean does not know how to deal with the emoji’s Carly has been sending him.

Claire and Morgan find Charlie at the baseball game. They sit and hang out with them for a little bit, realizing that he’s in love with the concession girl. They get him to go talk to her.

Clear and Morgan accompany Charlie on another adventure is they let him drive the car in a parking lot.

Sean assesses the bubble girl after surgery. He and Tara talk about Carly and her text messages. Tara offers to help him communicate while they both talk about how they are not close to their parents. Tara shares that she used to have a boyfriend but he died. While checking her lung sounds Sean realizes she has another infection. It looks like sepsis.

Sean reports his findings to Neil and Alex. Alex wants to do some risky gene therapy well Neil thinks traditional is a better approach. He just wants to fix the infection. Alex doesn’t think that’s the life this girl wants to lead.

Charlie’s parents meet with Marcus to talk about his recent outbursts. They are scared for him. Meanwhile, Charlie is going on a drive with Carly and Morgan. He tells them about life before he became ill. Now all his mother does is cry when his father is quiet and they go to endless doctor appointments.

Neil, Alex, and Sean meet with Tara to talk to her about her possible treatment decisions. She would rather be alone, she tells them. Sean cuts in to talk about how he is also a freak but he isn’t lonely anymore because of Dr. Glassman and the others. Neil is angry but allows them to prepare for gene therapy.

Morgan and Claire bring Charlie to a strip club. He wants to see a naked woman before having possible surgery that will end his site. They have to pay the bouncer to get him in.

Aaron and Audrey meet to talk about Neil’s recent issues. Abby intervenes, Aaron has patients to see telling Audrey to come back when she has an ear infection.

Claire tells Charlie enough is enough and they are going back to the hospital. He refuses to go. He’s not going to have the surgery, he tells her.

Tara asks Sean to sit with her before surgery. It’s nice to be near somebody.

Aaron and Abby are having a conflict. He needs more time with the patient but Abby is too focused on keeping him on schedule. After yells at her, she quits.

Claire sits down and talks to Charlie. She shares that she recently lost somebody and may have taken her anger out on him. He needs to have the surgery. It might suck now but it’ll suck less and he’ll be able to do all of the things that he’s trying to do right now so quick. They head back to the hospital to meet with his parents. His parents cry. They wanna all have fun again together, maybe some concerts, baseball games. He thinks this sounds good.

Aaron confronts Neil about his recent loss of a patient. Aaron tells him that he isn’t fine as much as he says he is and that he needs to deal with it.

Charlie cries before surgery saying goodbye to his parents. This makes Morgan tear up. Just before she takes him to the OR she shows him her breasts. He wanted to see a naked lady just in case he couldn’t someday. He smiles all the way to surgery!

Charlie has come out of surgery and can’t see. Tara’s T cell count has come up, her fever has dropped. Things look good for her. After they leave the room, Tara comes out of her bubble to look out at the city with a smile.

Aaron asks Abby to come back to work. Morgan finds Claire at the bar to tell her she needs to deal with her crap before this is who she becomes. Neil has a drink alone without Audrey. He tries to call her and it goes to voicemail. Sean finally gets the hang of texting Carly.