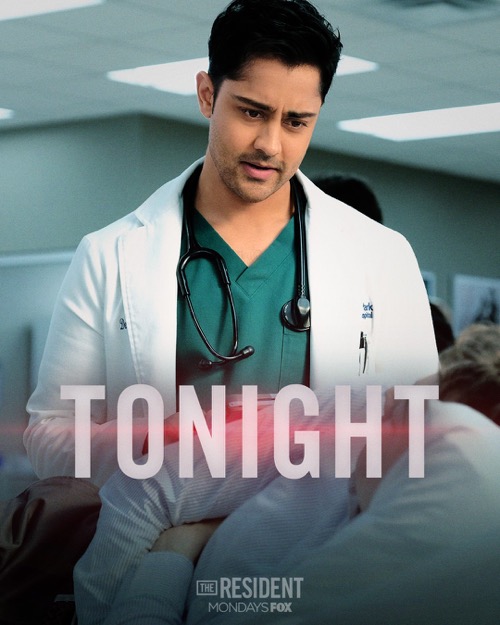 Tonight on FOX their new medical drama The Resident airs with an all-new Monday, February 18, 2019, episode and we have your The Resident recap below.  On tonight’s The Resident season 2 episode 15, “Queens”  as per the FOX synopsis, “Bell’s confidence in Quovadis continues to waver when the poster child for one of its medical devices, Henry Barnett, is rushed back into the ER, experiencing seizure-like symptoms.

Meanwhile, Mina’s past comes to light when her mother, famous Nigerian surgeon Dr. Okeke, pays a visit to Chastain, and Conrad makes a risky move when Henry returns to the hospital.”

The Resident season 2 episode 15 airs at 8 PM – 9 PM ET on FOX. Make sure to bookmark this spot and come back for our The Resident recap! While you wait for the recap make sure to check out all our television recaps, news, spoilers & more!

Tonight’s episode opens, Mina meets with a surgeon and a friend Adaku who needs a double mastectomy. She doesn’t want to to do. Mina tells her that is the safest option.

At Chastain, Nic and Mina walk together talking about her engagement. She hasn’t made up her mind yet.

A famous surgeon arrives to help Mina operate on her patient and friend Adaku. They all discover she is Mina’s mother. Meanwhile, Devin sees a patient in the ED with kidney stones.

Nic and Conrad meet with Henry to see how he is doing. They notice a bruise on his arm and question Zoey who has a new boyfriend. She tells them there is no way. Meanwhile, Mina and her mother talk about Adaku. Her mother tells her she needs to talk to her friend into a mastectomy with passion and warmth. She is glad she is here to do it for her.

Devin’s patient has complications and must be rushed to surgery. His records said he had an appendectomy but after looking at scans he still has an appendix.

Mina and her mother meet with Adaku. Mina’s mother talks Adaku into surgery, making Mina feel incompetent in the process.

Nic visits Henry while he colors after taking several tests. He tells Nic he wished Conrad was his dad. He doesn’t really like Doug. Nic notices another bruise. Henry doesn’t know how he got it.

Devin’s patient is out of surgery but is hypotensive.

Mina and her mother Josephine attend a luncheon with Bell and AJ and several others. Mina’s mother starts to talk about why Mina left her country until Mina runs out. Josephine arrives at the car to leave. Mina is waiting. On their ride home Mina tells her she has no right to mention the fire that killed her sisters. Mina calls Josephine a bad mother for working too much and leaving her at home as their caretaker.

Mina and Josephine scrub in at the OR for the first time. AJ watches from outside.

Henry talks to Conrad about how his dad left when he got sick the first time. He doesn’t want Doug to do the same. His mother is lonely. He tells Conrad how he has been falling down and waking up on the floor. It isn’t like his other seizures.

Mina goes to suction the patient. Her mother corrects her. When Josephine is offered a scalpel a minute later she throws it across the room right after AJ tells Bell, who just arrived, that Mina’s mother is a problematic human. He thought she was charming but he can see that now.

Devin has figured out that his patient is a twin and stole his brother’s insurance card because he doesn’t have insurance. His patient suffers from rheumatoid arthritis.

Mina meets with Adaku post-op. Her mother interrupts, irritating Mina. Devin decides not to tell billing about his patient’s illegal use of insurance.

Mina is in the OR crying alone. AJ comes in. She tells him she always thinks it will be different when she sees her mother. But it is not. He consoles her.

On their way out of the hospital, Henry passes out on the floor of the lobby in front of Conrad and Zoey. They rush him back into the ED. After they work on him they figure out the Vagus nerve Stimulator is slowing his heart. They need to turn it off but the wand is across the street at the clinic. Conrad rushes while Bell and Nic try to keep him alive. They save him after Conrad arrives.

Conrad tells Bell that it was the device from QuoVadis that failed. They need to stop doing business with them.