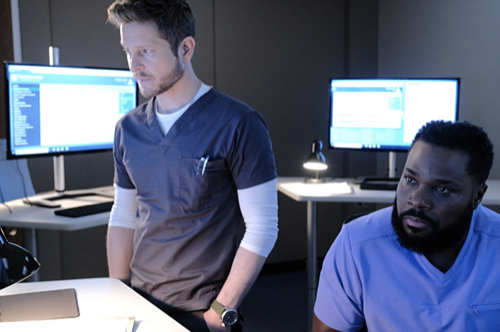 Tonight on FOX their new medical drama The Resident airs with an all-new Tuesday, October 1, 2019, episode and we have your The Resident recap below.  On tonight’s The Resident season 3 episode 2, “Flesh of My Flesh”  as per the FOX synopsis, “Cain tries to recruit Bell and Kit to join him on a dangerous surgery, with the intent of garnering publicity for the hospital.

Meanwhile, the Raptor finds himself with an emotional attachment to a patient whose life is put in his hands, and Mina’s friend, Adaku, arrives at the hospital with shocking news. Also, Devon rotates out of the ER and Nic plans a surprise for Conrad.”

The Resident season 3 episode 1 airs at 8 PM – 9 PM ET on FOX. Make sure to bookmark this spot and come back for our The Resident recap! While you wait for the recap make sure to check out all our television recaps, news, spoilers & more!

Dr. Bell goes to meet conjoined twins. He is excited and plans to have them come to Chastain to be separated. Their girlfriend arrives. She doesn’t want them separated. The brothers tell Bell the surgery is off. The mother is beside herself as is Bell.

Conrad and Nic wake up. She tells him she’s ready to move in with him.

Bell finds his prized patient while watching Montel. Unfortunately, Dr. Cain takes the stage. He is going to be the one who will do the surgery on a cancer-ridden mother named Dawn. Bell is steaming. He heads to meet him at the office. Cain tells Bell all about the splashy surgery he is ready to perform for publicity. Bell isn’t sure this is a good idea. He is also upset because he is typically the one who approves these types of surgeries. They agree after some talk that Cain will do it.

Mina and Nic break into the boarded-up free clinic while Conrad tries to dodge PT. Later, Mina meets with her friend Adaku who breaks the news that she is pregnant. Mina isn’t thrilled. Adaku had cancer. She tells Mina she is cancer-free and it will be alright.

AJ is ready to eat breakfast when his biological father Lamar comes and sits down. AJ is not friendly and knows who he is right away, telling him to leave. His biological father shares that he is dying and it is genetic. AJ could have the same thing. AJ stops walking to hear more.

An administrator comes to the clinic that Not has opened back up. He threatens to have her arrested for trespassing. The clinic was shut down.

Mina brings her friend Adaku to see Devin. Devin reassures Mina that Adaku has a high chance of having a successful pregnancy. She needs to relax.

Conrad tells AJ that his biological father has emphysema but isn’t dying. He does, however, have an Alpha-1 deficiency. He takes AJ’s blood while they talk about their fathers. Conrad points out that maybe AJ needs to figure out why his biological dad lied.

Kit and Conrad meet with Cain’s patient, Dawn, the single mother of a large family. They tell her she has long odds. She doesn’t care she wants to take the chance. Kit and Devin tackle a mock surgery while Nic tracks down Bell. She wants his help in the clinic but he isn’t willing to fight.

AJ is approached again at the hospital by Lamar. He finally reveals the truth that he and AJ’s mother where young and he also wonders if AJ is actually his son. Maybe his wife cheated? As they get into a heated argument, Lamar collapses.

Mina is thrilled when she meets with Adaku. She has no cancer in her ovaries. After they talk further, Adaku reveals she used her eggs prior to chemo that was frozen for her. She did not use an egg she knew was free from the BRCA1 gene. Mina is angry and cannot believe she would take such a chance. Adaku is fine with her decision and does not want to play God. Mina is paged to the OR. Adaku tells her she no longer wants to talk about this anyways now and later.

Kitt heads to see Cain after her mock surgery. There is no way he can pull this off with tumors all over Dawn’s spinal column and in her abdomen. Cain is arrogant and tells her he can do it. He also doesn’t need to practice.

AJ learns that Lamar needs surgery. Conrad talks him into performing it while Mina thinks it is a bad idea. AJ heads to Lamar’s room to tell him the news. He knows he can do it because since he was a kid he has tried to conquer everything he does then maybe his birth parents would regret giving away someone so great.

Kit, Bell, and Devin are in the OR working on Dawn, doing their part before Cain comes in. Their part is a success. Cain arrives. He prefers Megadeath as he scrubs in.

Meanwhile, AJ and Mina are washing up to perform surgery on Lamar.

Montel arrives at Chastain. Cain and Bell announce that Dawn is out of surgery but struggling to breathe and wakeup on her own. Her kids cry on camera. Devin watches from the other room. He tells Conrad they are calling the surgery a success but he doesn’t see it that way.

Bell comes out into the hall to see Montel talking to Nic who is telling him all about Chastain’s free clinic. Bell is silently irritated.

Mina brings a gift to Adaku’s. She tells her she should have respected her decisions.

AJ checks on Lamar post-surgery. He is doing well. Lamar apologizes again for what he has done but wants AJ to reach out to his biological mother. AJ doesn’t answer, telling him goodbye.

Nic brings Conrad back to the property he once thought they might move into. It is back on the market. They are not thrilled.