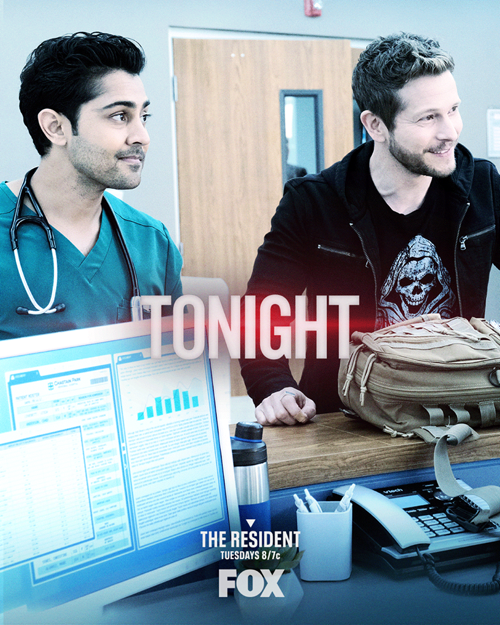 Tonight on FOX their new medical drama The Resident airs with an all-new Tuesday, October 15, 2019, episode and we have your The Resident recap below.  On tonight’s The Resident season 3 episode 4, “Belief System”  as per the FOX synopsis, “Devon’s patient, who was pronounced dead, suddenly revives. Conrad is left doubting Devon’s judgment and wondering what happened.

A well-known white supremacist falls under the care of Cain and Nic, causing the two to butt heads on how to move forward. Meanwhile, on their way to a medical convention, the Raptor and Mina get stuck in a strange town, where they uncover new information about Red Rock Medical.”

The Resident season 3 episode 4 airs at 8 PM – 9 PM ET on FOX. Make sure to bookmark this spot and come back for our The Resident recap! While you wait for the recap make sure to check out all our television recaps, news, spoilers & more!

Mina and AJ are on the road to her presentation at a medical conference. He won’t let her pick the music or eat trail mix in his car. The car suddenly makes a sound. Meanwhile, Devon calls the time of death for a teen who collapsed while walking at the mall.

AJ and Mina stand on the side of the road while an arrogant and very weird local mechanic looks at the car. He guesses a day to fix and it won’t be cheap. AJ looks over across the road at a cornfield with a voodoo doll being used as a scarecrow. Mina is creeped out.

In the ED, Devon’s patient sits up in his body bag, scaring everyone around him. Conrad teases Devon. The patient is rushed to the OR.

A new patient comes in. He is well known on social media for spewing hatred towards anyone who isn’t white. He doesn’t want Devon to work on him.

Mina and AJ walk the desolate streets of the little town they are stranded in. They walk to a nearby diner where everyone stares at them. The waitress tells them they need to order and get it to go.

Bell comes face to face with a group of white nationalists carrying guns on their hips. They have come to visit their friends. Bell tells them no guns. They threaten him before leaving. They will be back.

Cain visits the racist patient who doesn’t want him to perform the surgery. Cain laughs, he will hear about his death on the news. The man Hades suddenly begs him to stay, morphing into another personality. Cain is taken aback.

Conrad and Devon meet with the teen Remy who collapsed in the mall. They tell him he has dilated cardiomyopathy. He needs Cardiac Cath. His girlfriend interjects, telling them they are leaving. Conrad notices track marks on her arms.

Cain sits with Hades who is currently exhibiting another personality. Cain tries to understand what is going on.

Back at the diner, AJ and Mina are told they aren’t liked and need to leave because they work for Chastain, who shut their local hospital down.

Remy begins to code again. Devon rushes to help him. His girlfriend offers her blood, that’s what he needs, not meds. They are both vampires.

Conrad and Devon sit and talk to Remy and his girlfriend, trying to get down to the bottom of how they share blood.

Cain and Nic debate about Hades and his personality disorder. Cain doesn’t believe in it while Nic does. They head to his MRI where they see his AVM is bleeding. They also see some scarring Cain views as the reason for his illness. He wants to cut it out. Nic tells them they need a neuro consult. Cain doesn’t want one, he wants to operate. He tells Nic to back off.

Cain visits Hades who has morphed back into his racist personality. He doesn’t want Cain to come near him.

Devon and Conrad tell Remy that he has too much iron in his body, its poisoning his organs. They need to take out a pint of his blood. His girlfriend tells him no way.

Mina and AJ check into their motel in the creepy night hours as thunder breaks outside. Meanwhile, Cain injects Hades while Bell looks nervous as he approaches his office. One of Hade’s friends comes out of nowhere and pounces on Bell, telling him he saw Cain, the black doctor, brings Hades into surgery without consent. Nothing better happen to him. Bell rushes to the OR to tell Cain to stop. But he is reluctant.

Nina is having a nightmare, she lets out a scream. AJ wakes to help her and walks out into a cornfield with the voodoo doll. It looks like he too is having a nightmare in the bed of his hotel room. Mina falls out of bed onto the floor. She hears AJ at the door and answers it. She kisses him before really waking up.

Bell tells Cain that he isn’t covering for him. Cain sees it otherwise if Bell wants to keep his job.

AJ and Mina are called to help the waitress from the diner. Her arm is filled with flesh-eating bacteria. The townspeople agree to let them operate in the abandoned office. In the OR there they talk about how meds were illegally dumped into the town’s water which may be the reason behind some of their weird behaviors.

The next day, AJ and Mina say goodbye to the townspeople who are happy they saved Sonya, the waitress. They plan to sue Chastain, taking AJ and Mina’s advice.

Mina heads to her presentation alone but with AJ’s support. She pictures him in the audience when she hits the stage.

Nic brings Hade’s psych files to Cain, the ones he should have waited for. It seems Cain actually erased Hade’s good personality. He should have listened to Nic.