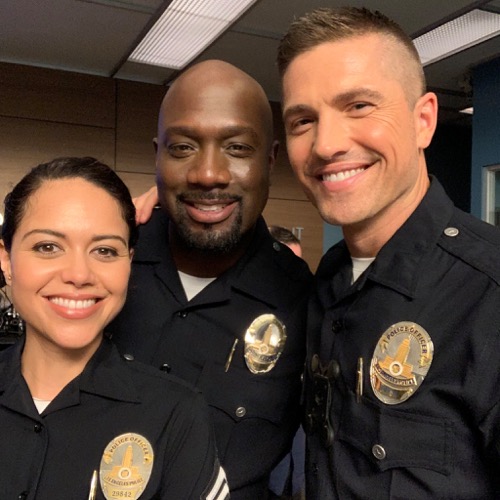 Tonight on ABC their new series The Rookie airs with an all-new Sunday, October 6, 2019, season 2 episode 2 called, “The Night General,” and we have your The Rookie recap below. On tonight’s The Rookie season 2 episode 2 as per the ABC synopsis, “Nolan teams up with new night detective Pablo Armstrong for a murder investigation case that results in an unexpected reunion with a former love interest.”

Tonight on the Rookie, Nolan is assigned to give a tour to the new night patrol Detective Armstrong. Rookie West has to find a new location to live since his apt has become a crime scene, he feels Det Grey is setting him up for failure.

Tim and Chen respond to a call where a mother is trying to stop her two sons they make a bet to see if the bulletproof vests they ordered online works, the two have the vests on with guns pointed at each other in the yard and they shoot, at first it appears no one is hurt until one brother falls to the floor, and Chen examines him to find the bullet has penetrated the best.

While on patrol Det Armstrong and Nolan come across an unruly hospital patient who tackles the men and Nolan’s ex-girlfriend Grace, who happens to be a doctor at the hospital saves the men by sticking the patient with tranquilizers.

They then move on to another disturbance for a home invasion, they rescue and free two adults husband and wife but unfortunately there is a casualty which is the victims son found upstairs, Det Armstrong and Nolan take on the case to find out who and why the house was broken into, the two men have a lead on a robber but finds him half beaten on the floor, he’s rushed to the hospital and put in a coma.

Grace and Nolan discuss their bad breakup from 20 years ago, he tells he had to break up with her because another woman named Sarah showed up pregnant and he chose to do the right thing and step up and take care of his responsibility and causes conflict and her to be uncomfortable since she’s the Doctor for their suspect. While Chen is helping Tim to study a book Det Grey gives him, she makes the suggestion that maybe Tim has a learning disability, which he quickly shoots down.

Matt who is the victim’s father from the home invasion comes into the precinct for questioning. It seems as if he knows more then he leads on and Det Armstrong and Nolan put a tracker on him since they feel he knew who killed his son and maybe out for revenge.

West and Lopez speak on how he can step his game up so that he can get off his extended training as a rookie by Det Grey and she gives him some pointers. Tim and Chen report back to an earlier disturbance call and encounter a bounty Hunter Rex, who’s a retired from the force who Time knew from the force.

He’s currently trying to nab a suspect for attempted murder, Chen and time warned him to call for help but he resisted saying he would lose the bounty reward if he did.

Rex tried to take the suspect into custody but the suspect has left him injured, Tim goes after him at his aunt’s house, she refuses to help but they threaten to arrest her, she calls him and his phone rings in the house, they find where he’s hiding.

He puts up a fight they eventually detain him and take his aunt in for aiding and abetting. Matt has ditched the tracker and proceeds to go after his other sons killer, they question his wife on his whereabouts and she tells Nolan and Det Armstrong and finds him at a construction warehouse where Matt has him buried in cement.

The two men frantically pull him out, but May has taken his own life by hanging himself off a construction truck, to avoid going to jail and facing the consequences for what he has done to his son’s killer.

Chen figures out a way to help Tim with the book read and makes him an audio recording of the book instead, she also offers West a place to stay and invites him to be a roommate.

Tim visits Rex in the hospital and lets him know he worked things out so that Rex could receive the bounty, Nolan apologizes to Grace for how he left her hurt in the last and she accepts his apology.