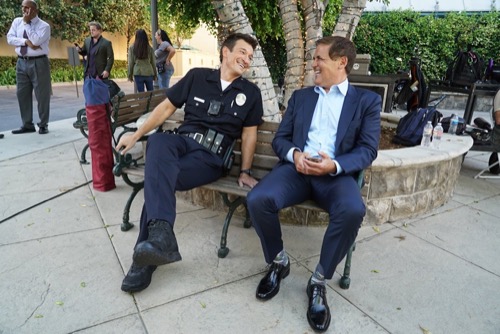 Tonight on ABC their new series The Rookie airs with an all-new Sunday, October 13, 2019, season 2 episode 3 called, “The Bet,” and we have your The Rookie recap below. On tonight’s The Rookie season 2 episode 3 as per the ABC synopsis, “Officer Nolan navigates building tension in his relationship with Jessica and a developing rapport with Grace while working a high-stakes criminal case involving an undercover homeland security agent.

While on patrol Nolan and Chen stops a man who’s speeding, while asking him for id they discover he’s a beekeeper with bees in the car and they begin to attack the rookies and the suspect flees. Angela pressures Wesley into inviting her to a family event staying since they been dating she’s never met his mother.

While still, renovations are still going on at Nolan’s Jessica hints she wants to move in it catches Nolan off guard and in an awkward moment, Jessica says she was joking. Chen decides to set Tim up on a blind date with her old friend Rachel.

West and Smitty patrol the neighborhood and round up a group of men they suspect are up to no good while putting the men down and checking for if one runs off and west goes after him on a foot chase ,when he catches the man he finds bullets in his pocket and ask where the gun is, a woman nearby screams for help as her young son is waving and pointing the gun the man has dropped, West asks the little boy to put the gun down and the gun goes off and shoots his mother.

West is shaken up over the incident and feels Amherst should’ve done things differently to prevent the little boy from shooting the mother. While on patrol Lopez and Nolan spot a man being chased and respond to help him, they end up at an empty car and the man is dropped from a footbridge onto the roof of the car turns out he is an undercover DHS agent working on a case Jessica has knowledge on but can’t discuss with Nolan they thought he was either dead or compromised while undercover.

Lopez and Nolan discuss their personal relationship issues and Lopez feels Wesley is embarrassed about her since she never met his mother. Smitty advises West to give a statement to the ADA about him seeing the suspect Gleason toss the gun even tho he didn’t, West says he can’t lie, and it turns out the gun is being linked to an unsolved murder but they have no DNA from the suspect Gleason because he’s been released from custody before they could collect any.

The mother from the shooting has died, West goes after one of the men in a roundup and brings him into the station for questioning on Gleasons whereabouts, they find Gleason and he’s brought into the precinct to collect DNA from him.

Tim goes out on a date with Chen’s friend Rachel which is a bet she made betting it would end in disaster and if it does she would be forced to wear long shirt uniforms, the friend asks for a favor from Tim and in return she’s asked to slap him to make it look like the date went bad and she does.

Lopez and Wesley go to his mother’s for dinner and he tells her that the reason he never introduced them is because he comes from a wealthy family who he doesn’t want handouts from and refuses to touch his trust fund, him and his mother argue and Wesley leave but his mother asks Lopez to stay and not go after him.

Back at the hospital the DHS agent is comprised and he’s being kidnapped by a fake nurse and man, and Nolan goes after to try and rescue him, he finds him downstairs in a basement morgue room and the DHS agent is being questioned by man for passwords with a chainsaw pointed at his fingers threatening to cut one if he doesn’t give him the information he needs, Nolan rescued him and detains the suspects.

They bring the DHS agent to safety and we’re able to get the passwords the kidnappers were looking for to seize 22 million on assets from an arms dealer. Nolan and Jessica clear up the confusion from that morning about her wanting to move in and he states he was just scared since he hasn’t been divorced for that long. Nolan and Grace continue to take steps in rebuilding their friendship.

Chen stops by Rachel’s place to thank her for going out with Tim and finds that Tim spent the night there, meaning Chen has won the bet and doesn’t have to wear the long-sleeved uniforms and she smiles in victory leaving Rachel’s house.