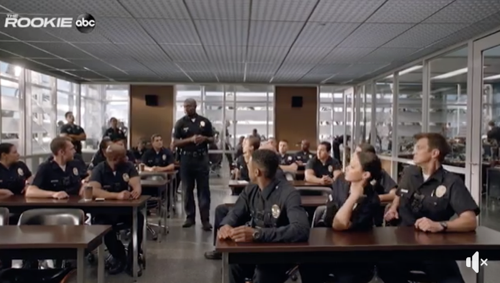 Tonight on ABC their new series The Rookie airs with an all-new Sunday, October 20, 2019, season 2 episode 4 called, “Warriors and Guardians,” and we have your The Rookie recap below. On tonight’s The Rookie season 2 episode 4 as per the ABC synopsis, “Officer Nolan gets off to a rocky start after being introduced to his new training officer, Nyla Harper, who has an unconventional approach to police work after her stint as an undercover detective.

Meanwhile, Officer Bradford struggles to think of an appropriate birthday gift for Rachel, and Officer Lopez finds herself navigating a case that triggers a personal memory.”

Nolan met his new partner. Her name was Detective Nyla Harper and it was a little on unusual side for him to be partnered with a detective. It just didn’t happen. He normally wouldn’t be working them full time unless he himself became a detective and so there was a story there. Harper must have done something to go back to being a Training Officer. And Nolan wasn’t going to find out that story any time soon.

Nolan’s first task with his new TO was to show up at a bar. He was in the middle of some home renovation and he tried to ask for extra time because he knew he couldn’t make it there in twenty minutes, but Harper didn’t care. She demanded that he show up when she told him to. She also used that same first meeting to show off a manipulative side to her because she pretended to be a waiter and milked into revealing personal information about himself.

Harper would later say he couldn’t be trusted because he revealed so much, which wasn’t fair and was another worrying sign to her personality. She was mean when she didn’t have to be. She also told Nolan right off that she didn’t care for him because he was a guardian type. He became a cop to help people and that apparently annoys her. Harper said she couldn’t work with his types and so maybe that’s why she was downright disrespectful.

Harper ignored the first half of their morning briefing. She was busying talking if not outright flirting with her fellow cop and so she had to be reigned in a bit. Grey, for one, wasn’t happy with her. Harper didn’t care for anyone else’s time and she was also aggressive when she could get away with it. She wanted a high-powered weapon for their tour because she said she needed something to liven up her day.

Then on their first day together, they chased a man on a run and he later fell off a roof. He said that Harper pushed him. Nolan didn’t know who to believe and so he tried to talk to Harper. But she put up a wall with him. She said he should believe her because the other guy was a dirtbag and he couldn’t do that. He instead reported the incident to Grey. Grey then reviewed Harper’s bodycam and it showed that she was telling the truth.

Nolan incidentally felt bad about it afterward. He thought he misjudged Harper and that’s when Grey told him that Nolan had been right not to trust her. She was just coming from four years undercover. She dealt with suspicion and lies while working with the cartel. She was probably so stuck in her own head that she didn’t know that she could trust anyone and that’s why Grey partnered her with Nolan.

Grey said she would have worked her way through a younger rookie in no time. Nolan at most had a fighting chance and so Grey was hoping that Nolan could be someone Harper turns to, though for that to happen, she had to stop him giving conflicting orders. They went back on the street together and out of nowhere, she stopped because she recognized a guy from her undercover days. And so she stripped out of her clothes and followed him because he last knew her as a junkie.

Harper was trying to get back in good with him. She also ordered Nolan not to interfere and he sorta had to when she got into a physical altercation with their suspect. Except Nolan didn’t break her cover. He arrested her as he would with anyone that got into a fight and he let the guy nicknamed Corkscrew go. Its what Harper wanted and so he tried to give her that. Except he wasn’t going to let her get away with keeping him out of the loop.

Nolan used the opportunity of having her in the backseat to question her. He tried to find out what was happening and, when she refused to answer, he left her in the backseat while he went to lunch with his friends. Both of them wanted to know what happened. Nolan tried to tell them everything he knew and they all figured he’d be fire when Harper was freed. She then surprised them all by breaking out of the backseat.

Harper did as expect when she fired Nolan. She then changed her mind when she learned that Nolan had gotten Corkscrew’s cell phone number. That was something useful and Harper later roped in SWAT so that they could work together to track down Corkscrew’s contacts. She was back to being her normally cruel self by then, so Nolan was warned by Bradford that if anything went down then he should call Officer Chen.

Bradford likes to pretend to be hard, but he was actually quite kind, and he didn’t want any rookies being put in danger because of an irrational TO. He and Lopez both saw something in Harper they didn’t like. They had found out she had gotten the Golden Ticket and that meant she could have had her pick of any assignment. She was now in patrol because that’s where she wanted to be and no one thought she was safe there.

Bradford and Lopez talking about it a lot. They each had their own cases and Lopez caught a woman who ran someone over ten years ago and was now living as a transient, but she arrested her because that was the right thing to do. Bradford arrested a social media influencer who broke into a child with cancer’s room in order to take photos for Instagram and that was when he wasn’t searching for the perfect birthday gift for his girlfriend.

Bradford and Lopez each had their own lives as well as their life on the job. Yet, that never stopped them from taking care of their rookies and that’s why they were wary of Harper. Harper nearly risked her and Nolan’s career when she went off book with SWAT Team. She chased down a suspect when she should have reported it and that left them outnumbered. They ended up getting into a gunfight they weren’t prepared for.

And so it was a good thing when Chen and Bradford showed up to save the day. With the additional support, they were able to arrest a big-time drug dealer and they didn’t die. Harper was also forced to apologize to Nolan and he was even given the chance to file a report against her. And he didn’t take it.

All Nolan wanted was her story and he thought he’d get it one day because he could see that it was a good one.