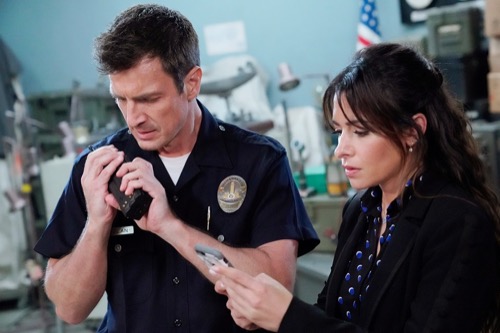 Tonight on ABC their new series The Rookie airs with an all-new Sunday, November 3, 2019, season 2 episode 6 called, “Fallout,” and we have your The Rookie recap below. On tonight’s The Rookie season 2 episode 6 as per the ABC synopsis, “An emergency alert of an impending missile attack sends Los Angeles into chaos and uncertainty, while the officers each try to keep the peace and deal with their own disasters.”

Officer Bradford was advised by his girlfriend to take it easy on his rookie. Officer Chen was recently invited to her ex-boyfriend and ex-best friend’s wedding. It turns out the two hooked up when Chen and the boyfriend were living together. So, Bradford’s girl who also happens to be Chen’s friend had wanted him to take it easy on her. She was going through a lot and what she needed was support. Bradford didn’t like it. He was usually the tough one and so he only chose to be nice because his girlfriend convinced him of its merits.

Bradford later let Chen drive. He never lets her drive and so she started to suspect something was up from then. She didn’t know for sure that Bradford knew until he didn’t call her out in front of others. He waited to reveal a mistake she made and she knew he didn’t do that. He loves humiliating her in front of people. Chen knew he knew by then and so she confronted him. She said she told her friend not to mention anything to him and that she was fine. She said it didn’t bother her. She also wanted Bradford’s opinion on what the invitation could mean.

Did her exes want to humiliate her even further? Was she now supposed to starve herself so that she could fit into a drop-dead dress for the wedding? Chen was pestering Bradford with these questions when the world went to hell. Everyone began receiving an alert from city officials that a ballistic missile was heading their way and unfortunately most of them were in the blast radius. Nolan was at a preliminary court hearing that was right in the blast zone and that meant he was trapped in a room with a bunch of scared people.

The judge said the court building didn’t have a bomb shelter. The only underground place was supposedly the holding cells and the prisoners said there wasn’t safe either. It apparently rained down in the cells. The people in the court needed to find somewhere else and they needed to keep the prisoners from revolting. Nolan was keeping an eye on them when he loaned his radio to Wesley. Wesley had been there as a defense attorney and so he was trapped in the blast zone as well.

Wesley had also asked for that radio because he wanted to talk to Lopez one last time. They told each other they love each other and she told him that the courthouse does have a bomb shelter. She saw it when she was a rookie. Wesley knew Lopez wouldn’t lie to him and so he told Nolan. Nolan then realized that the judge, as well as the ADA and several members of the court, were gone. The judge had taken some people down to the bomb shelter and they were going to let everyone else die.

It was Nolan that stopped them. Nolan took the gun away from the judge and put the man under arrest. He then let in everyone to the bomb shelter. There weren’t enough supplies to last so many people and so the judge had been onto something when he lied to everyone. He wanted the supplies to last and it was only for the people worthy. There was some dissent in the group when they realized the prisoners were being protected and so Nolan had his hands full. He was lucky to have Jessica there with him because at least they were together at the end of the world.

Meanwhile, people were going crazy out on the streets. Every officer was needed and that’s why Bradford and Chen were trying to stop the looters. They found a shop that needed protection and it didn’t hurt that they could drink in the meantime. Then there were others like Detective Harper. She wasn’t out there because she was watching her daughter Lila and she couldn’t get into contact with her ex. It was also, unfortunately, a custodial kidnapping. Harper didn’t have custody and her ex did. And so she found herself in some legal trouble when the alert turned out to be a false alarm.

There were also others like Lopez and West who were dealing with a cult. The cult called themselves the Children of the Stars. They had planned on killing themselves to greet the celestial being coming to meet them and so the officers were able to talk them out of it. They said the celestial beings will find them no matter what. They didn’t have to kill themselves and thankfully they didn’t have to. The false alarm had saved everyone. Lopez and West went to the courthouse to tell everyone that the bomb threat wasn’t real and they came across a prison break.

The prisoners were all trying to break out when the backup support helped put their rebellion down. Sadly, some people got hurt in the attempted breakout. Wesley was stabbed and so he was rushed to the hospital. His girlfriend was waiting to hear how he was and her friends all came to the hospital to support her. Even Harper showed up. She got into trouble with her ex-husband and Nolan talked the ex out of pressing charges. So, whether she liked it or not, Harper was now a part of the family and Nolan has her back.

And thankfully Wesley was going to be okay.