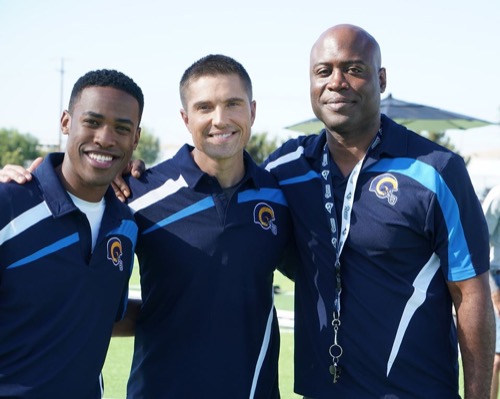 Meanwhile, Officer Bradford and Office West are assigned a community policing project helping out the Watts Rams as volunteer coaches at their fall clinic, along with Rams players Eric Weddle and Robert Woods.”

Officer Bradford was a badass. He once stopped a car chase by pulling out of his garage and cutting the driver off. So, yeah, Bradford was good at his job. Its why the Sarge later tried to give him his dream job of watching football practice and today he wasn’t teaming up with Chen. Lopez was still out. She was talking of her boyfriend and so her rookie was temporary given Bradford as his TO. It turns out Officer West was a football star back in high school. Thereby making him a great fit for Bradford on this cushy job.

Officer Chen meanwhile received Harper as her TO. The officers were working on community policing and what that means is that they have to build trust with the locals. If trust is established, people feel more willing to call the cops and report any issue. Chen and Harper were going to be doing a community meeting held at the station and at first, Harper put up a fight about this meeting. She said it wasn’t the 1950s and that the women shouldn’t be given a parent meeting while everyone else got a better job. And so she challenged Bradford to challenge coins.

It was a silly little game that they played with the coins they were issued by the higher-ups. Harper ended up winning the game and then she decided to let Bradford have the football detail. She said she only did the job out of principle. She doesn’t even watch American football and so she was fine with the community meeting because she was going to push it off on Chen anyways. Chen had to talk at the meeting. She was told to promise nothing and to claim they were dealing with any issues the people might bring up.

But Chen messed up. She got overwhelmed and she promised an old lady that she would check out a tip for her. Chen’s promise also forced her TO into going along with her. Harper was left furious and they still had to check out the tip. The tip by that way had led them to two crack addicts. The women got into a fight with them and Chen had been overwhelmed. Harper had to take down her perp as well as Chen’s. She said afterward that Chen was only good for community meetings and that’s when she saw the look.

The look from Chen that said she wanted to punch Harper. Harper saw it and she challenged Chen into coming at her with everything she got. She pushed and she pushed until Chen attacked. Chen was then quickly defeated. Harper told her to stay down and, with Chen at her feet, she told Chen that as a woman she couldn’t let a little thing like the perp’s size get to her. The male perps were always going to be bigger than her and if she let a little thing like that bother her then she didn’t deserve to be out on the street.

Chen was beginning to hate community policing if it meant she had Harper. Harper who referred to her by the way as Not Nolan because said the only one she wants to remember is Nolan and Nolan was glad for the break from her. He was doing his own form of community policing by attending a monthly free seminar for pregnant mothers. It was at the hospital with Grace and the seminar was bringing up a lot of feelings for Nolan. Nolan’s girlfriend had recently told him that she was late. She was never late and so she knew she needed to take a pregnancy test.

It was supposed to be hours ago. Nolan still hadn’t heard anything from her when he did the seminar and so he was constantly thinking about it. He even took a break from the seminar when Jessica called, so that was the moment an ex-boyfriend came barging and tried to drag one of the mothers out of there. Nolan asked him to desist and the guy attacked him with a knife. Nolan had to respond with his own weapon. He then subdued the suspect and had to wait for backup because he needed stitches from when he was slashed by the knife.

Nolan was later being treated when Jessica showed. She wanted to check on him and she also apologized for not calling sooner. She said her mind had been elsewhere. She wasn’t pregnant as it turns out, but the pregnancy scare did make her realize that she wants to have kids and so she wanted to know how Nolan felt about it. Jessica knew she was asking for a lot so she willing to give him a chance to think about it and he was still in a fugue state when he asked his Sarge about it. He wanted to know what it’s like to have a baby on patrol and the answer was mixed.

Sarge loved being a father. It just left him dead tired trying to juggle two things at once and so Nolan wasn’t sure what he wanted. He was still thinking about it when a kid came in. The kid wanted to talk to Bradford and it seems he met Bradford at football practice. The kid’s name is AJ. He was suddenly pulled out of football by his mother and two were supposed to leave town. Her car was firebombed before they could go so Bradford gave AJ his card so that the kid could call him if anything else happened. And, well, AJ was reaching out now.

AJ said he his mom went to go borrow a car from their cousin. Except she never showed and she wasn’t answering her phone either. His mother wanted to flee the scene because her old robbery crew was demanding she be their getaway driver in a new heist and so AJ believes they forced her into it. He also asked Bradford to find her before she gets hurt. Brad promised AJ that he would and he was looking for AJ’s mother when his squad car passed Lopez. She hadn’t been with her boyfriend after all.

Lopez took a private security job while she was out. She was protecting some hotshot tech guy and so when she saw the guys patrolling the area – she called them up to ask what was going on. They told her about their situation and she connected the heist with her guy. Which was a good thing because he really was the target. A group of armed men showed up and Lopez was under so much fire that it was a good thing when Bradford and West showed up. They also had AJ’s mom who locked the thieves out of the car because that allowed them to be surrounded.

Luckily, AJ’s mom is going to walk from this incident because she was reluctantly pulled onto the job. Lopez meanwhile received a job offer from her tech guy and she turned him down because she realized LAPD is where she wanted to be. Chen came to that decision as well when she helped bring down a bomber with Harper. Harper said Chen had what it takes and she even used her name that time too, but Nolan also came to the realization. He realized he wasn’t ready to be a father again because he first wanted to focus on his career and so he and Jessica broke up because she was ready to have a baby.