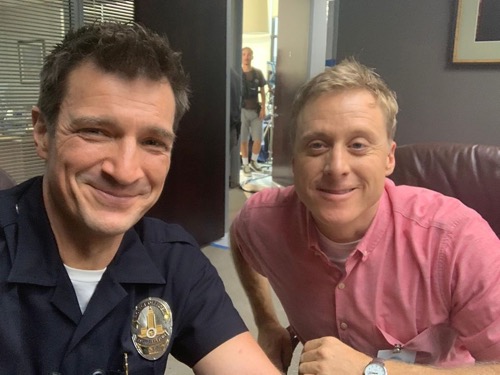 Tonight on The Rookie, it’s Nolan’s birthday but he doesn’t want anyone to know. Nolan is called to a crime scene on his day off. The scene cleaner name Ellroy comes to clean up the crime scene, Grace calls Nolan to wish him a happy birthday showing her still remembers. While cleaning Ellroy starts to depict what may have happened and Nolan begins to try and solve what happened, as they begin to look around they find the body of the security guard in one of the offices.

Harper asks for an early evaluation from Sgt Grey to help her custody battle for her daughter he refuses to give it to her since he feels she is a loose cannon and hasn’t earned that relationship with him yet,but he offers to ride and patrol with her for the day and he decides to base the evaluation off of how she handles and conducts herself on their patrol . They encounter a woman who seems intoxicated attempting to get into her car and drive but they stop her before she does. While taking the woman to the precinct they encounter a man in the street with a bat, Harper talks him down and detains him Sgt Grey compliments Harper on how she handled the situation.

Tim and west will be receiving an award from the Deputy chief. West and Lopez stop a man for texting and driving turns out he has narcotics in his dashboard and as West is trying to retrieve it the PCP substance explodes on him through the air conditioner, he gets high off the substance. Lopez notices and tells him they are going to the hospital to get his blood levels tested and tells him not to say a word to anyone.

Chen and Tim are out on patrol and get into a car accident due to Tim being distracted. They crash into the back of a car thankfully no one is hurt, unfortunately, this may affect Tims receiving the award as Sgt Grey tells him to sit out the ceremony out he has to go to the hospital to get tested so they can rule out him being impaired while driving.

While at the hospital Lopez and West run into Tim who is also there for his tests.

Lopez asks Grace to keep the results of the test between them. Tim runs into the woman Sarah that he hit and apologizes but her boyfriend Mike yells at him and threatens to sue the department.

Chen goes to talk to the Sgt who tells Tim he’ll be suspended to tell him she noticed the brake lights for the other car wasn’t on, they inspect the car and find out the lights were pulled out and may have been done intentionally as an insurance scam and find red phosphorus to set things on fire for arson the trunk leading them to believe they may be involved in other scams, turns out the car was rigged. They bring in Sarah’s boyfriend Mike in for questioning, He denies having driven Sarah’s car and says he wants a lawyer.

Tim and Chen go back to question Sarah and she admits she was leaving her Mike because he became over the top with the insurance scams they would do and now agreed to kill someone’s wife for insurance money. Tim and Chen come up with a plan to catch Mike in the act and pose as the woman he’s supposed to kill and they detain him.

Ellroy asks Nolan about Nell and what she’s like some he never met her, Nolan invited him to come down to the station and meet her. Ellroy gives Nolan a Twinkie with a candle for his birthday he then shares the story of his first crime scene that being of his sister’s. The suspects return to the crime scene in an attempt to continue looking for the money they killed the lawyer for, a gunfire fight between them and Nolan starts Nolan tries to call for backup but his radio has been damaged by a bullet, him and Ellroy run into the other office and come up with a plan to catch the men, Ellroy is givens pipe as defense since he doesn’t have a gun and throws it at one man and it works they catch the men. Nolan takes Ellroy to meet Nell.

Sgt Grey gives Harper a positive evaluation, the results are back for West and it turns out he wasn’t high off PCP but elevated caffeine levels and just had an allergic reaction to the substance that turned out not to be PCP. The team surprises Nolan with a little get together for his birthday and he appreciates it.