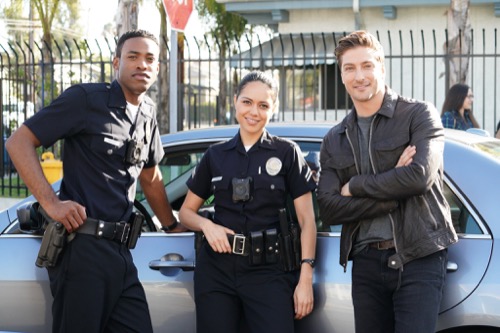 Tonight on ABC their new series The Rookie airs with an all-new Sunday, December 1, 2019, season 2 episode 9 called, “Breaking Point,” and we have your The Rookie recap below. On tonight’s The Rookie season 2 episode 9 as per the ABC synopsis, “Officer Nolan’s trust is tested when he tries to help the previous owner of his home reconnect with his family.

Meanwhile, Officer Harper has finally earned an overnight visit with her daughter that is put into jeopardy when her past undercover life resurfaces again.”

Officer Nolan received a visitor at his new home. The visitor wasn’t a neighbor and he didn’t even live nearby. His name was Howard Green. He used to live in the house Nolan now owns and Howard came by because he thought his ex-wife was still living there. His ex-wife Barbara had thrown him out after she had given him an ultimatum. She told him to choose either his family or drugs. Howard chose drugs and he hasn’t seen his family in over five years. He was hoping that Nolan would at least know where she moved to, but Nolan bought the house from a bank. He never met the previous owner and he didn’t know how to help Howard. And Howard truly needed help.

Howard was dying. He was diagnosed with brain cancer and he wanted to see his family one more time before he dies. Howard unleashed everything he was feeling on Nolan. He wanted Nolan to understand why he was so desperate now and Nolan understood alright. There was just nothing he could do about it. Nolan later put the whole thing behind him when he reported to work and not that surprisingly he ended up getting involved in someone else’s issues. Someone like his TO. Harper was worried about this weekend because she finally was going to have her daughter stay with her for a night and on top of that someone from her past came back.

Harper was undercover when she worked with a woman named Eva Ruiz. Harper grew close to her and the two sorts of became friends. Harper had used Eva to gain an introduction to some big drug dealers. Harper eventually dropped the friendship when she gave up undercover work, but a part of her was still worried about Eva when she heard Eva was beaten up pretty badly. Harper told her captain that she wasn’t going to reach out and then she did the opposite. She approached Eva as Crystal and she tried getting answers out her. She soon heard that there was a new player called Ripper and that Ripper beat up Eva because she was skimming.

Harper also tried to get Eva to turn to the police. Only Eva didn’t want to be a rat and she didn’t care what Harper thought. Harper disappeared out of her life without an explanation. Eva had thought she died and she wanted to go back to thinking that because she felt her friend had abandoned her. Harper meanwhile had still wanted to investigate the assault. She talked it out with Nolan and, while he thought she was self-sabotaging, he still supported her as she decided to go back undercover. Harper later cleared it with her sergeant. She was going back in as Crystal and this time she was going to have a backup.

Nolan also used this time to do a search for this Barbara. His own father had walked out on him when he was ten and he never got over it. Nolan now felt Howard deserved to give his family closure, but he couldn’t find Barbara. She disappeared. Her social security hasn’t been used in years and Nolan had no way of contacting her. He was beginning to think it was suspicious when Howard broke into his house. Howard broke in with a knife and he implied Barbara was afraid of him. Barbara seems to have disappeared like she did because she was in hiding from Howard and so Nolan arrested Howard for the break-in.

It was probably the only way Nolan could keep Barbara safe. Nolan also kept his partner safe when he helped her out of a tight spot on the job and so Harper came to realize that she needed to put her past life behind her. She was now going to focus on Lila. Getting joint custody of her daughter was the most important thing and Harper couldn’t allow the draw of undercover work to get in her way. Meanwhile, Nolan’s friends had their own adventures. Officers Lopez and West were a consultant on a tv show called “Hot Suspect”. They were there for barely a day when one of the stars reported a stalker and the officers had to protect her. They eventually caught the stalker who worked on set and West also got a date with one of the stars.

But even that didn’t match Chen’s day. Chen and Bradford thought they were helping a little boy after they found him alone in an apartment with his mother’s dead body and unfortunately he wasn’t a victim. He was actually their perp. The little boy had killed his mother because she stopped him from playing video games with her boyfriend and the little boy got annoyed. So, Chen and Bradford had to go through the worst parts of the job by arresting a kid that needed help rather than prison time.

Even if they both knew that kid’s life was over the moment he killed his mother.