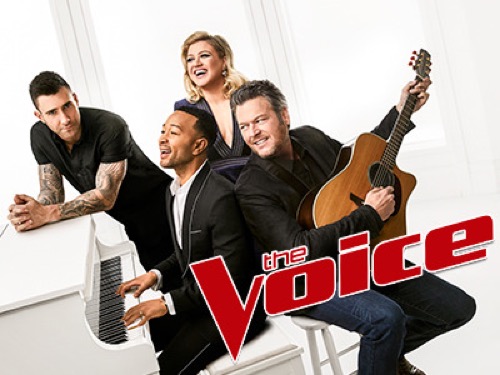 In the season premiere, the talent is exceptional and the competition is fierce as new coach John Legend joins returning coaches Kelly Clarkson, Adam Levine, and Blake Shelton as they vie to discover and coach the next singing phenomenon.”

The Voice was back for an all-new season! On Season 16, the judges welcome John Legend as their fourth judge and they introduce him to their competitive spirit as they all raced to grab the best artists. The first artist they heard tonight was Gyth Rigdon. He was a country boy from the south and he had no problems with singing country however Gyth doesn’t define himself by sticking to one genre because he can sing others as well and so he sang “Drift Away” for the blind auditions where he threw in some heavy high notes that had really impressed the judges. Three out of four judges turned around for Gyth and one of them had been John. John heard a purity in Gyth’s voice and he would have liked the chance to work with him. And unfortunately, he was denied this opportunity.

Someone blocked John Legend. He never found out which of his fellow judges was behind it because they all tried to blame someone else and so this unknown judge had been scared of John getting his hands on a country star. Both Blake and Kelly have competed in the past over country stars and they both wanted Gyth for their team, but with his options limited thanks to that block, Gyth chose to go with Team Blake. Blake won his first pick of the night and the fact he won the man over from the others so easily was something they were going to want revenge for. The next contestant had been Maelyn Jarmon. She was a partially deaf vocalist and because of her condition, she had been struggling with making it into the music business.

People didn’t want to take a chance on Maelyn and that short-sightedness kept them from recognizing true talent. She had an amazing voice and she proved so to the judges when she sang ”Fields of Gold” for her blind audition. Maelyn impressed the judges from the start and received a rare four chair turned. All of the judges had seen the talent she possessed and had wanted her for their team, but John was the one that said just the right thing. He described Maelyn’s voice as magic and the way he showed how enthusiastic he was about hearing her had been enough for Maelyn. She decided to join John on his team thereby making John the first to receive a four-chair turn vocalist for this season.

The next contestant was Karen Galera. She was originally from Mexico and moved to Texas when she was a little girl. Karen also has a brother that was serving in the military who couldn’t make to her audition tonight, but she still sang “Mi Corazoncito” in his honor. It wasn’t a traditional audition song because it wasn’t in English and so there people like Blake that wasn’t sure if he could coach Karen while Kelly was so self-assured that she turned around within seconds of hearing Karen’s voice. The rest of the judges had all looked at Kelly as if she was crazy and then you know once they heard the rest of the song it had been John that turned around for Karen. And so Karen had real talent, its just needed to be fine-tuned and there was no one that could do that better than Kelly.

Karen joined Team Kelly and it gave Kelly her first pick of the night. Afterward, there had just been one judge left out in the cold. Adam didn’t have anyone on his team and he tried to regroup when he heard the next contestant. The next contestant had been Trey Rose. He was a lot like Blake because he was from the middle of nowhere and needed someone to take a chance on him yet he wasn’t exactly country. He liked to do plenty of crossovers with other genres and give them a little country flair. So he showcased one of those songs. He sang a pop song like “Wake Me Up” and he gave it a little bit of country twang. And it won over both Blake and Adam. It had been Adam who turned around first and Trey had respected that enough to choose Adam’s team and become his first pick.

The next contestant had been Kim Cherry. She took the world by surprise when this young woman began singing “No Scrub”. Kim even went on to rap during the song and so, of course, the judges came to respect her. Two of them even turned around for her. Kelly and Blake both loved Kim’s voice and they knew they would enjoy having someone as bold as her. She was white and no one could tell until they saw her. It had been her voice that won them over and the rest was what they came to love once they saw her. Kim was talented and she agreed that she might be taking a risk, but it didn’t stop her from picking Blake and joining his team. He said last season that he wanted a rapper and so this year he has to prove he knows what to do with her.

The next contestant had been AJ Ryan. He grew up in a tough Brooklyn neighborhood and used music as an outlet to escape. It helped him stay on track and he became the first member of his family to earn a degree, but while that was all truly commendable, his voice simply hadn’t been ready for “The Voice”. He could do those high notes really went and then suffered on those lower/ smoother notes. It could have been because of the song he chose and so maybe he could back next year with a song that will do him justice. Now the next contestant had caused another battle amongst the judges. Rizzi Myers went next and she sang “Breathin”. She showed off a great deal of control of her voice and wowed three of the judges.

John, Kelly, and Blake all turned around for her. There was just one little problem this time because one of the judges had blocked John’s turn. John just got there and he’s already been blocked twice. The others couldn’t take the risk of him going after the talent and so they kept shutting him down. He missed out before with Gyth and he missed out again with Rizzi. Rizzi was talented and bubbly. She reminded everyone of Kelly and the two of them hit it off. Kelly loved Rizzi and Rizzi loved Kelly. They got on so well that Rizzi chose to join her team over Blake’s and so Kelly now has two seats filled on her team. The next contestant had been Lisa Ramey. She was a familiar face because she tried out last season and sadly back then no one had turned around for her.

The judges had all said that maybe things would have been different if she had chosen another song and so she was back to more or less prove she could sing, but she also wanted John to hear her because he never had before and so this time around she auditioned with the song “Sex on Fire”. It had given her some breathing room in the song and her voice was able to shine. She won over John and was automatically added to his team because he turned around for her. Lisa finally found someone to believe in her and she promised her coach that she was going to do well. The next contestant had been Jimmy Mowery. He went through a personal tragedy when he was a kid because his mother’s ex-boyfriend had murdered his father and unfortunately he was lost for a while.

What helped Jimmy come back was music. It was something he had shared with his father and by pursuing it he felt like he was keeping his dad around. Jimmy auditioned with the song  “Attention”. It had been a great song for him and it won over two of the judges. Adam and John both liked him and they knew what to do with his voice to make him a true threat in the competition. Jimmy could have chosen either of them and it would have worked, but he chose Adam because he felt his music was more stylistically alike to Adam’s and so Adam won over his second pick without really trying. The next contestant had been Lili Joy and she actually had a secret weapon. She sang “Cool” by Gwen Stefani and right away it grabbed Blake’s attention.

Blake swore he didn’t just turn around because of the song she chose, but it had still been smart of Lili to pick that song and to even add her own touch to it. She made it her own and she won herself a seat on Blake’s team because the other judges knew better than to try to challenge him over this particular vocalist. But the next number had been another disappointment for the contestants. Contestants Nathan and Chesi Arnett had auditioned as a duet with the song “Waymore’s Blues” and while it was good they could have done better with perhaps a different song. The judges still felt bad about letting them go and so the couple was recruited by the “Comeback Stage” where if they make it there then they could get another chance at “The Voice” this season.

Matthew Johnson was the last contestant of the night and he hadn’t even had to try all that hard to impress the judges. He won over two of them on the first note and the last two with the second line in “I Smile”. Matthew received a rare four-chair turn and had his pick of whichever judge he wanted, but all along it had been John he was aiming for and it had been John he chose as his coach.