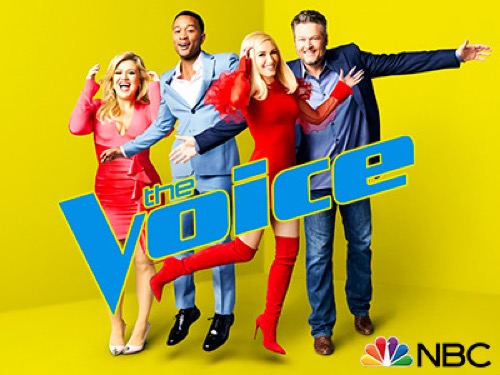 In the season premiere, the talent is exceptional and the competition is fierce as the coaches vie to discover and coach the next singing phenomenon in the “Blind Auditions.” The vocalists compete to be selected by one of the coaches and fight for a chance to be named “The Voice.”

This season was off to a great start when the first contestant received a rare four-chair-turn! Kate Kadan has a deep and soulful voice, but she could only choose one of three judges because someone blocked Kelly Clarkson. Kelly didn’t know who did it. She suspects it was Blake Shelton and Blake meanwhile was blaming John Legend. John swears it wasn’t him. He would be honest about it if it had been him and so everyone knew it was Blake that did it.

Gwen Stefani, however, was the only chill one. She was coming back to the show after a break away and the break seems to have done her some good. Her pitches, for one, were better. She literally drooled over Kate because Kate was a rare talent. She had everything from personality to voice and so everyone wanted her. Even Kelly who wanted revenge for being blocked. Kelly told Kate to choose either Gwen or John and as luck would have it Kate ended up choosing John.

The contestants were all looking for the judge that best represented their music. Some had an idea of which judge would work out best for them before they came to the show and so Kate most likely was always going to choose John. Not that Blake sees it that way. Blake desperately wanted to win this year and now Kelly was going to do everything possible to stop that. The next contestant was Jake Haldenvang.

Jake was a rocker. He usually wasn’t up Blake’s alley and so it came as a surprise when Blake, John, and Gwen all turned around for Jake. Jake showed amazing skill. He was great on the guitar and his falsetto was so good that it had shocked Gwen and Kelly into believing he might be a woman. So, Jake truly had what it took. He now knows it and he had to choose the judge that would best coach him.

Jake chose to stick with his rocker past by choosing Gwen, but Blake whined about it the longest and so the night was just kicking up. Jay Miah was next. He was a drag queen so he was more than a singer. He was a performer in truth and it was hard to bring that out during the Blind Auditions. Maybe that’s why he left the drag at home tonight. He went out onstage and was just himself with the song “Never Enough”. And it was good.

Unfortunately, none of the judges thought it was good enough. They didn’t turn around for him and it wasn’t until it was over that any of them realized Jay was a man. They all just thought he was a nervous woman. His voice had wobbled and, frankly, that took away from his performance. The judges would have picked him if they had actually seen his performance. And that’s why they asked him to come back – they figured he’d do better without the nerves.

Brennan Lassiter went next. The southern belle was dedicating tonight’s performance to her grandparents who took on the job of raising and never once uttered a complaint. But they were happy when their tribute turned into a rare four-chair-turn. Brennan managed to win over everyone with her song selection and that’s why John turned around as well. He loved the southern rock element. And he turned, despite knowing that she was never going to pick him.

Everyone assumed Brennan would pick Blake. Blake was the country expert and usually people chose him over everyone else. Only not Brennan. Brennan surprisingly picked Kelly. Kelly who was begging her just second before had also been surprised when Brennan chose her and she didn’t even care if it might been out of pity. She was just glad to be chosen. So, first hour in, the only one that didn’t have a singer was Blake.

Rose Short was next. She was a former Correction’s Officer and she turned to her music to help her deal with an often stressful job. Her music was now everything to Rose. She showed as much when she went out onstage and gave an amazing rendition of a John Legend song. Not that her song choice helped her with John. He didn’t turn for her and neither did Blake. It was really the women that became fans.

Both Gwen and Kelly wanted her. They each had jackets to hand out and so they made their pitches. Gwen told Rose how she could help her through this trial by fire. Kelly, though, had said Rose sang a better version than the original singer. Then she remembered it was John’s song so she had to apologize for it and was still apologizing as Rose chose Gwen as her coach. And Kelly would go on to step on John’s toes.

Take Will Breman. He was a unique singer in that he rearranges the song to fit his voice and he did that with a Spice Girls’ song. His rendition was so good that both Gwen and Jon turned around for him. Will grew up with both of their music and yet Kelly told him to go with Gwen. Kelly may have betrayed him, only John didn’t let that get in his way. He went onstage to sing with Will and that alone won the other man over. Will ended up choosing John and that wasn’t a surprise at all.

Alex Guthrie went next. He was another one with a soulful vibe and he displayed that in his music. Both Kelly and Gwen turned around for him, but he once opened for Kelly and she had loved his voice then just like she loves it now. Alex would naturally choose Kelly tonight. He was a big fan of hers and it turns out Jennifer Hudson was a bid fan of his. JHUD would later call Kelly and ask her friend to take care of Alex because he was one of hers.

So, you never know who these artists may have met in the industry. Kat Hammock went next and she was actually pretty shy in her everyday life. She considers herself an introvert. She didn’t come out of her shell until she was onstage and that’s when her stage persona took over. Kat was completely different when she was onstage. She was confident and she showed off her talent. She won over both Blake and Gwen with her voice.

Kat was just what Gwen has been looking for, but Blake was desperate by this point. He had no one on his team and he wanted Kat more than anything. He begged, he pleaded, he lied, and he nearly came to tears. He’s been on the show since the beginning. He didn’t know why none of the contestants hadn’t chose him yet and he truly wanted Kat to be the first to fix his slump. And so she had to take him – anything else would have just been cruel!

In the middle of all this, however, there were some no turns. CJ Washington and Timmy Hood each made critical mistakes onstage. One spent most of his time amping up the crowd and he entirely forgot that the judges weren’t paying attention to performances. They needed to judge based on the voice and they never really heard any from CJ. They did hear it with Timmy and unfortunately it was Timmy’s nerves that got the best of him. This was his second performance live and it sounded like it.

Marina Chello went next. She was living her American Dream here in the States and it wasn’t always easy work. She was once signed to a record label. She thought that would be it and her time petered out. Marina was here now for her second chance. She wanted to make more of a success this time and she chose to do it with a Pink song. Marina had a Kelly vibe and Kelly turned for her. Only, so did Blake.

Blake still had such low numbers. He needed to recruit more vocalists and he wanted to recruit Marina. He made his pitch and somehow he managed to get her. Everyone thought she would go with Kelly and it was shocking when she didn’t. But there were plenty of those left. Kyndal Inskeep was next and she was a country musician. She turned to music to help with her anxiety and depression and it seems music kept her grounded.

Kyndal was a nanny during the day. Its what helped her keep track of those bills and it also helped as testing phase for her music. Kids were always honest with her. They told her when it wasn’t good and they told her when she got it right. So, those kids helped fine tuned her performance for the Voice. It was a great performance and it won over three of the judges. Even if Blake was blocked. His girlfriend Gwen blocked him and she was just sad she didn’t block Kelly in time.

Both Kelly and Gwen wanted her so bad that their pitches hit below the belt. Gwen said Kelly wouldn’t have time what with all those kids and a tv show. And so Gwen played dirty, but it won her Kyndal and everyone agrees that Kyndal has a distinctive voice.