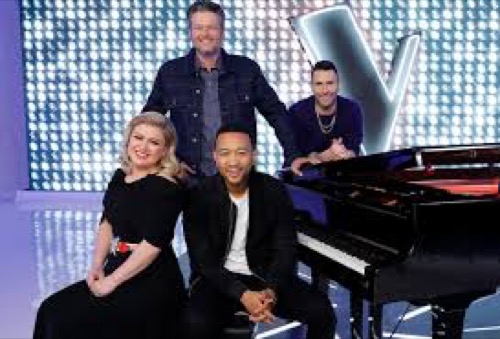 The first contestant was Betsy Ade. She was a rocker from Kenosha, Wisconsi who grew up around music. She first made her start in a band with her brother and she continued to follow her dream even as she became a first-time mother. Betsy said that she and the woman she was with had both wanted a family, but sadly the relationship fell apart not long after she had their son and so now she was a single mother. Betsy never wanted to give up on her dream and so she was hoping she would land a coach with her audition. She tried-out with the song “Hunger” and while she had some Florence inspiration there was also several other artists that the judges picked up on. And so two of them turned around her – one was Adam Levine and one was John Legend.

Betsy loved both of their pitches and so she more made her choice based on emotion. Her son was a huge fan of John’s and so Betsy chose to join his team.

The next contestant was Dalton Dover. He was a young man from Aragon, Georgia which was actually a pretty small town. Dalton grew up in a trailer with his mother and siblings and the neighborhood they lived in was the sort of place where everyone knew your name. He even knew his wife forever when they got married and started their family young. His children were still small, but they had been excited about being there with daddy and pretty upbeat until they started wavering when he went onstage. Dalton sang “Don’t Close Your Eyes” as if it was a lullaby and it had touched everyone. It had even gotten to the other judges and so the reason why only one of them turned around was because the others didn’t want to face the competition.

Dalton was a country musician and everyone was in agreement when they said that he deserved to be on Team Blake.

The next contestant was another country musician. Her name is Rebecca Howell and she sang “The Night the Lights Went Out in Georgia” with little fanfare. She let her voice do its work and sparked a true competition amongst the judges. This time the others did want to get into a fight because three of them turned around. John, Kelly, and Blake all turned around for her. She had strong control over her voice and could receive great coaching if she chose anyone of the judges but both Kelly and John started their pitch by telling Rebecca that she could do so much more than just Blake. Its not like Blake was the only one that knew country music. Kelly grew up listening to it in Texas and John on the other hand has worked with many country artists. And so they must have gotten to her.

Rebecca decided to take the unexpected choice and she ended up joining Team Kelly. It had shocked Kelly so much that she started jumping up and down shouting “OH MY GOD”.

The next contestant was Kendra Checketts. She was a teenager from San Diego, California and she had always been interested in the arts. Kendra grew up loving music and dancing. It didn’t really become about just the one thing until Kendra’s father suffered a brain hemorrhage. The doctors had said he wouldn’t live through the night and instead he woke up after two weeks in a coma. It had been such a miracle and it had inspired Kendra to pursue a life in music. She had her whole family backstage as she auditioned with the song “Sober” and right from the beginning she had impressed Blake. Blake had enjoyed her voice from the start and he was the only one to turned around for Kendra.

The other judges later admit that they should have turned around, but it was too late now because she was firmly on Team Blake.

JT Rodriguez had been the next contestant. He from a fitness instructor from Chattanooga, Tennessee. He had gotten into fitness after putting on some extra weight when he was a child and his parents were having problems, but while he loves his job, it could be very taxing on his voice. It eventually came to a decision of whether or not he wanted to go further in his career or if he wanted to pursue his real passion which was music. He came to a decision that now was the chance to give his music his all and so he auditioned with the song “Higher Love”. The judges had seemed to enjoy themselves and so there was no reason why none of them turned around. Someone that maybe they had been too into the music that they forgot where they were and hopefully that was the case.

JT was still a great artist and his audition had been enough to win him a place on ‘the Comeback Stage’. He had joined Team Bebe and who knows where that will lead…

The final contestant had been LB Crew. He was a smooth crooner from Little Rock, Arkansas and more than anything he wished his brother was there with him. His brother had suffered setbacks in life and he still needed even more surgeries, but despite all of that, his brother left a warm-hearted message for LB and it inspired LB to give a phenomenal audition with the song “Waves”. It grabbed Blake and Kelly from the start and then John turned before Adam clinched this in as a four turn chair. All of them wanted LB and Adam had the weirdest pitch of all because he started his by saying that LB wasn’t all that great. And so it had been super weird.

Though, oddly, it won over LB and he joined Team Adam.