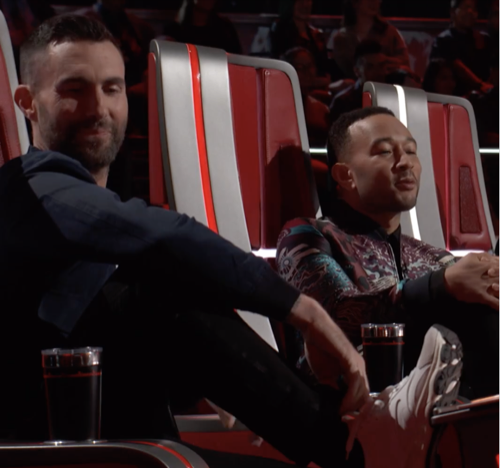 Tonight on NBC’s Emmy Award-winning musical competition The Voice airs with an all-new Monday, March 11, 2019, season 16 episode 5 and we have your The Voice recap right below. On tonight’s The Voice season 16 episode 5, called, “The Blind Auditions, Part 5,” as per the NBC synopsis, “The blind auditions continue.”

Tonight’s episode continues with Jae Jin, 33-year-old from Maryland. He is a soul singer who is of Asian descent. When he was young he was diagnosed with a terminal illness where his bone marrow shut down and he was told he only had a few months to live. He is definitely a fighter and tried an experimental drug that kept him alive. For two years he has been living out of a suitcase and playing music wherever he could. Jae performs “Hallelujah I Love Her So”. All four judges turn around as Adam Levine says it was a little laid back as John Legend wanted it to be a little dirtier, it felt too safe; wanting it to be more from his gut! Blake tells him it needed that “stank.”

Denton Arnell who is 31 from Chicago. He works at the youth church and has been with his girlfriend, Tiffany for over 3 years. He played piano since he was 4 years old. He reveals he has a ring for her and wants to spend the rest of his life with her. He performs “Hold On, We Are Going Home” and within seconds John Legend turns around, dancing in his seat. Adam tells Kelly that was really good, but no one else turned their chairs. Adam tells Denton he is awesome and has a great voice as John welcomes to Team Legend, saying his tone is wonderful and was creative with the melody, making it his own. He asks to share a moment with his girlfriend, calling her on stage. He pulls the ring out of his pocket but they knock heads; he manages to propose and she says, “YES!”

Next up is Ciera Dumas, who is 21 and from North Carolina. She dyed her hair pink as she wants people to remember her. Her life revolved around concert choir in high school, moving to Nashville when she was 19, but felt there were way too many people better than her. She feels she can do this and kick butt now. Ciera sings “Tell Me You Love Me”, John immediately gets on his feet, thoroughly enjoying her voice; both Adam and John turn around right away. John can’t contain how thrilled he is with her powerful voice. Adam calls her spectacular and everything she has done with her voice is what the show is all about. John feels mesmerized as it is a gorgeous voice, but she got a little nervous when they turned around. He loved the rasp at her high range, feeling the emotion and can’t wait to hear her tell her story. Kelly says she sounds like Janis and has a solid voice. Blake feels the rasp is the money maker, joking that she chooses John Legend. John doesn’t want her to give up the shred as Adam says her voice captures the entire room and will go very far in the competition. She chooses Team Adam!

Andrew Sevener is from Texas, feeling he needs to just get out there and do his country, rock, and blues. Him, his dad and mother started a band together; he finds it fun as they have taught him a lot, but he is trying to get his own thing going. He sings “Honky Tonk Women” and the entire audience stands to it and Blake turns his chair during the guitar solo. All the judges loved it, but only Blake turns, making him for Team Blake. Kelly says she didn’t pick him because all country singers choose Blake. Blake says he can hear Hank coming out of him, as John loves the guitar solo and how he electrified the room. Blake liked the rougher side of his voice and not afraid to go after the big notes.

Next up is Mari from Clermont, Florida who performs “Boo’d Up”, at the same time John, Kelly and Adam turn around within the first few notes. The audience goes crazy when she hits the high notes and all the judges stand up clapping. Kelly says she sounded so cool and fluid. John feels she comes off confident, saying she has listened to a lot of John and Adam. John says there could be a connection and Blake hopes she picks John. Adam says she is totally a disco, her tone was incredible in the beginning. He doesn’t have the connection she has with John but he can help her integrate into the show, telling her to keep that in mind when she makes a selection. Blake points at John, asking who she will pick as her coach and Mari chooses Team Adam, after apologizing to Blake.

26-year-old Crystal Rose from Kansas City is up next. She is proud of where she comes from and where she is today. She has 7 siblings and was separated from her mom when she was 3, moving to a children’s home until she was 18 years old. She remembers feeling forgotten and wishing she could see her mom, but felt less lost when she found her gift in singing; music is an escape and a way to express how she is feeling. She sings “Wicked Games”, but none of the judges turn around. Adam says it is one of his favorite songs, but tough to sing, encouraging her to come back. John feels she was wonderful, has talent and could come back doing really well. Kelly loved it but was waiting for some sort of common thread and hope she comes back. Blake apologizes, saying her chest voice was so good, but if she can find another song, she can beat them up and will make it!

Abby Kasch is from Illinois who began singing in bars when she was about 12 years old. She is 20 years old, surrounded by guys and being very much a tomboy. Right out of high school she moved to Nashville, saying it was very hard to leave her family. She felt she fit in completely with country music and became the person she wanted to be. She performs “Here for the Party”, Blake tells Kelly this is her chance to turn her chair, but he is waiting to hear the high note. Blake pushes along with Kelly. She loves the ballsy country and feels like she meshes with Kelly. Kelly laughs that she lives in Nashville, which is another thing she has in common with Abby. Blake turned around for excitement, passion, and desperation to have her on his team. Adam calls her talented and if he thought he had a shot he would have pushed his button. Kelly wants her on her team but won’t be shocked if she chooses Blake. Adam says she should pick Kelly, but she is Team Kelly!

Mikaela Astel is 14 years old and from Queens, NY. She performs covers on Youtube. She is nervous because of who she is performing in front of but hopes a chair turns and will know she has a very special voice. She sings, “Electric Love”; on the first note Kelly turns around, then John, Kelly tells Blake he should turn around as she is really good. Everyone claps and cheers for the young singer, as Blake calls her just a baby. Kelly says her tone cannot be taught as it is beautiful and round, something very different, which is important in this competition. John loved his tone and feels she is someone who would stand out in the crowd, believing she will be a star. She picks Team Kelly!

Next up is Anthony Ortiz who is 20 from Tampa, Florida. He who worries about the teams filling up very quickly and can only perform his best. He sings, “What Makes You Beautiful” and on his first note, Adam turns around, 100% excited for the raw form he has and believes they can turn it into something really special. He is Team Adam, as he is the only one who turned around.

Oliv Blu is the next contestant who is 20 years old from the south side of Chicago. She sings, “On and On”, feeling it would be especially special to work with Coach John Legend. John does turn his chair pretty quick, saying she sounded really good and flipped the song in her own ways, giving it more dynamic. Since John is the only one who turned around, she is Team John!

Kayla Seeber is 18 years old from Poplar Grove, Illinois. She is representing her town with her overalls, as her sister is doing her makeup. She figured out in 5th grade that she was different and always played it safe until she was 17 and wrote a song about liking a girl; her way of coming out to the world. Her parents support her, enjoying the crazy ride with her. She sings, “Baby, One More Time”, hoping to do something different with it, that is just like her. She finishes the song and not one of the judges turn around. Kelly and Blake call her cool and loved her take on it. Kelly talks about how Gwen Stefani is kind of achy and worries that Kayla was too guarded. John says it was a daring song choice but encourages her to keep going, and if she comes back she has a chance as she is almost there!

Lionel Taylor aka Shawn Sounds is from Houston Texas where he is a 33-year-old teacher by day, rock star by night. His students are very excited about him being on The Voice. He heads to the stage and sings, “All My Life” when Adam, John, and Blake all turn at the same time, Kelly hits her button on the last note and now he has all 4 judges to choose from. Kelly tells him he lit a fire and brought the spirit. She says he has a solid voice and a great range. John says his tone is beautiful and control is great, showing a lot of skill, but it was one of the best endings runs he ever heard; nailing it! Adam feels there are four chairs but he is the only one that matters; Kelly makes fun of his pitch feeling he is going to lose to John. Adam says he needs a coach who is willing to let him go far as he is refined and cares about every detail and could go a long way. Blake says the ending was incredible, regardless of him being a country singer. He feels this is a coach artist relationship and wants to make him into the best Shawn he can be. They all applaud him for being a teacher. They all love him but he chooses Team John!

Shawn tells everyone who has a passion, they need to follow it and go for it as they have a voice!