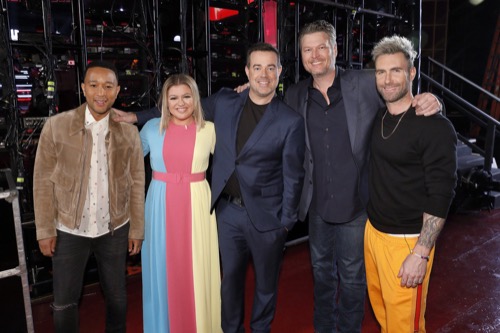 Tonight on NBC’s Emmy Award-winning musical competition The Voice airs with an all-new Monday, April 1, 2019, season 16 episode 8 and we have your The Voice recap right below. On tonight’s The Voice season 16 episode 8, called, “The Battles Part 2,” as per the NBC synopsis, “The “Battle Rounds” continue as the coaches enlist music industry powerhouses Charlie Puth, Kelsea Ballerini, Brooks + Dunn, and Khalid to prepare their artists to go head-to-head in the hopes of advancing to the next round. With plenty of steals left in play, the coaches are eager to fill their teams with the best talent.”

The second round of the Battles kicked off tonight. The first team to up was Adam’s. Adam brought in Charlie Puth to help him get his vocalists into shape and the first pairing they worked on was Karly Moreno vs. Celia Babini. Both of their styles were very different and it showed in their song “Friends”. Karly’s voice was sweet and smoother than her other half while Celia had the alternative vibe to it. Adam had to work with them to mesh their voices together and even then it wasn’t easy. There was no denying that both were super talented, but singing this song together did no one any favors because it wasn’t so much of a test as it was a clear victory. It became evident early on that Celia’s voice was stronger.

Celia had to pull back some in order to match up with Karly and while Karly tried to match hers she couldn’t. Her voice wasn’t on the same level and so she decided to sing the song like herself. She gave it that clarity that everyone loved hearing in her voice and it won over some fans. The battle had still gone to Celia and so Karly was up for elimination when out of nowhere Blake used his Steal for her. He said that he liked Karly’s voice and despite not choosing her during tryouts he realized that he wanted her for his team. Blake has no one like Karly and so she could do more stand out with him than she could with any of the others. It turns out just being herself was enough to earn her another week in the competition.

Team John was next. He brought in Khalid as his superstar backup power and together they cast Julian King and Denton Arnell in their first battle. The two vocalists have a laidback R&B feel to their voices and so John wanted to test their versatility. He gave them a song that was traditionally considered Pop. He gave them a Bruno Mars early song and he asked the vocalists to bring their own take to it. Both of them had been great in practice and they were great later on stage. There just wasn’t that much of a noticeable difference in their voices when they sang the song as a duet and even the other judges noticed. Adam said that both men were even on this one and he couldn’t see a definitive winner while someone like Blake said that he liked the add on that Julian had added. Other than that there was nothing that made either of these men stand apart.

John made his decision on who won this battle based on what he’d seen outside of their performances tonight. He said he liked Julian’s voice more because it was cooler and so he picked Julian as the winner of tonight’s battle. This meant that Denton was up for grabs. He had time to thank his coach and say this was a wonderful opportunity but no one used their Steal and unfortunately Denton was eliminated. At least he still had the chance of proposing to his girl and now he was getting married. If nothing else he still gets to home to having her in his life and so losing tonight doesn’t have to be his defining moment.

Team Kelly was next. She paired her powerhouses together again when she created the battle of Presley Tennant vs. Rizzi Myers. Kelly had Kelsea Ballerini in her corner to assist and they both decided on the song “What Do You Want From Me”. It was something that both women thought the ladies could handle and they weren’t wrong. Presley and Rizzi had fun with this song and with each other. It was still surprising that Presley was sixteen who looked like a model and so Rizzi just went with it. She said “yes” I’m paired with a beautiful young woman and it going to be okay because I’m going to bring my maturity to it. They both gave this song their all and at times Kelly told them that it was okay to pull back some. And so, of course, this was one of the best performances of the night because there was a lot of power in their voices.

It was such a hard choice that Kelly relied on her fellow judges for their opinion. They had been pretty split about who won because Presley had been more powerful while Rizzi had been cleaner. Kelly decided to pick this winner based off of this performance alone and so she named Presley as the winner of this battle. It was unfortunate that Rizzi couldn’t also win and that everyone was saving their Steals by then, but she could go back next year and she could keep trying until everyone recognizes her talent.

Team Blake went next. For his first battle, he paired Dexter Roberts and Dalton Dover together. They were two vocalists in Country who both played guitar and so it had been welcomed treat when they met Brooks & Dunn. The Country artists had been there to guide and help each contestant get to where they needed for a one of a kind duet. Dexter and Dalton were perfect together because their voices complimented each other and they both knew what it was like to sing with someone else. It wasn’t always about what verse was better because sometimes they could work through it together and that was this pairing showed. Blake had still given the win to Dexter when it was all over but he recognized that Dalton had the better range and that with a little time it could have been Dalton that won the battle.

Team Adam went next. He paired off Ciera Dumas vs. LB Crew because he both thought they would be great with a Charlie Puth song and it was just a coincidence that the man himself was there. He actually liked the idea and had wanted to see what those two could do with his song, but what made it such a great fit for both Ciera and LB was the rearrangement. Adam rearranged the song like he only can and it led to an amazing performance by two of his vocalists. They were both great and it was another choice for Adam. He had to take everything into consideration and he eventually named LB as the winner because LB just came out a little ahead when everything was counted up. And not to worry about Ciera because she got picked up by the Comeback Stage and so this wasn’t her last performance.

The last pairing went to Team Blake. He set up Kim Cherry and Kendra Checketts for the final battle and they both had something to add. There was something about Kendra that grabbed Blake’s attention right away and he had been the only to turn around for her. So Blake wanted to give Kendra her time to shine, but he didn’t want it to come at the cost of Kim who set herself as part as someone took risks from the first audition when she rapped her way into everyone’s hearts. This duet was given an Alessia Cara song and it more fit Kim’s vibe, therefore, it wasn’t surprising when she won this battle. Only Kendra had left a better impression with this song than her audition song and so two judges wanted to use their Steals for her. Both John and Adam wanted her for her team and she decided that she wanted to join Team Adam.

It was his last Steal and he knew it worth sacrificing when he heard Kendra and realized she could win the competition.