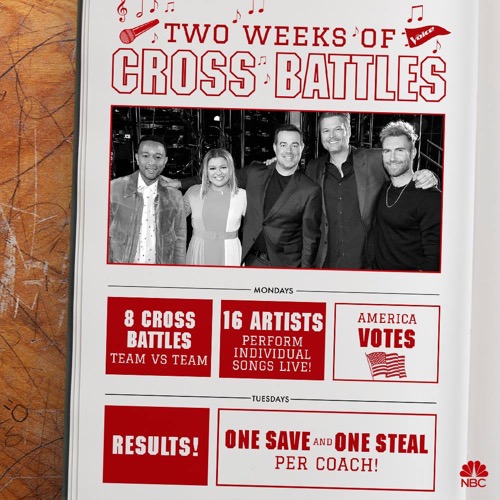 Tonight on NBC’s Emmy Award-winning musical competition The Voice airs with an all-new Monday, April 15, 2019, season 16 episode 11 and we have your The Voice recap right below. On tonight’s The Voice season 16 episode 11, called, “Live Cross Battles Part 1,” as per the NBC synopsis, “The new Live Cross Battles round will begin with 32 artists remaining in the competition. Over the course of two weeks, eight pairs of sixteen artists will perform each Monday, the coaches will select artists from their team to compete against artists from another team.

On the Tuesday results shows, the winner of each Cross Battle will be revealed, and 24 artists will advance to the next round through America’s vote. The coaches will have one save and one steal to use over the course of the Cross Battles.”

The show added something new. For the first time ever, there was now a round called the Cross Battles and this means the contestants could now battle someone from an opposing team. Team Blake went first and the man himself had said that he wanted to take on the reigning champion. He wanted to put his one of his brightest stars against someone from Kelly’s team because not only were these battles fun but they also prepare the artists for a potential shot in the finales. Hence Blake offered up Kim Cherry and Kelly took that bet. She offered up Betsy Ade and her duel with Kim hadn’t gone like expected. They weren’t singing the same song and nor were they singing a mashup. Each contestant was instead allowed the chance to take the stage by themselves and they had to impress everyone.

The audience can vote in the Cross Battles. It was up to them to further along with any person they believe worthwhile and the voting will be closed tomorrow. The judges, on the other hand, have one save, one steal for this round, and their opinions. Everyone loved this first Cross Battle because it took them back to the 90s with Kim singing “Poison” and Betsy singing “ You Oughta Know”. Both were classics and the women gave them pure justice. The judges didn’t want to say who came out ahead though the truth will be revealed tomorrow one way or another and so it was onto the next battle in the meantime. Team Adam chose Mari Jones from his team to be his first battler and of course he wanted to go against Team Blake. Blake nominated Selkii for this battle because he figured she has a similar vibe to Mari.

Mari and Selkii both had this laid-back attitude as well as tone to their voice and so it was an interesting battle to watch. Mari had fun with her song and even threw in a dance there towards the end. Selkii differed because her voice didn’t seem to match the song or its up-tempo. Maybe if they had stripped it of its original accompaniment and she had the chance to make it her own it could have ended differently, but as things stood it didn’t sound as strong as Mari’s performance and both John Legend and Kelly Clarkson felt the same. This battle had one clear winner and it wasn’t Selkii. The next battle was the one to finally utilize John. He chose Lisa Ramey from his team and he wanted to go up against Kelly. Kelly was everyone’s favorite because her fellow wanted to prove they could beat the queen. And so she decided to use Karen Galera for this battle.

Lisa went first in their battle. She sang “Its Hurts So Bad” for her part and had given a one of a kind performance. Lisa was a great entertainer and she turned that on easily enough, but Karen wasn’t any slouch either. She sang “Unfaithful” and was able to slip in and out of Spanish at will. She found what she was great with and she made sure to highlight it with this battle. Only the judges didn’t have a dog in this fight were all in agreement when they said that Lisa probably won this battle just because this was her strongest performance yet. Team Kelly took a hit with the last battle and so it’s a good thing she was up next. Team Kelly nominated Matthew Johnson for her first official battle and she wanted to go up against Team Adam. Adam had a feeling that might happen and he admitted to holding onto Domenic for just such a purpose.

Both men were great vocalists and so it had been a tough one. Matthew went first with “Who’s Loving You” and he had moved his own coach to tears. Kelly calls him her ray of sunshine because he brings such a presence to the stage and he did so again when he made everyone smile. The crowd loves Matthew, but Domenic made “Damn Your Eyes” his own that he had everyone believe that he was locking eyes with them. It was so good that Kelly couldn’t help saying she loved his performance as well. She was still rooting for Matthew except it didn’t change how much she enjoyed both performances and the others all said the same. They couldn’t pick between either man and so they left this decision entirely to America.

Team Kelly again got to select someone from their team and she selected Presley Tennant to challenge Team John. John also had a teen pop star in the making and so he wasn’t afraid to throw Kaylsin Victoria at Presley in the battles. They were the youngest in the competition and incredible vocalists. They blew everyone away as they sang their selections and again the judges that weren’t involve didn’t want to speak up. Adam came close to saying that Presley won because her performance has been one of her best yet and then he sorta dropped that line when he said he wanted to be impartial. Neither he nor Blake wanted to who won but if their behavior was anything to go by then it seems clear that the winner was Presley.

Up next was Team Adam. He could have challenged anyone, but the man loves challenging Blake and so he did again. He put forth Celia Babini because everyone loves her voice and her amazing control. Team Blake, on the other hand, put forth Oliv Blu. They were both young women coming into their own and they each gave a worthwhile performance. The only “thing” is that there was a clear winner. Adam was so busy reassuring his talent that she shouldn’t be judged based off of one performance that inadvertently admitted that if people voted based on just tonight that it would go to Oliv. Oliv’s performance was better. Her song was better and her voice was better. Her own coach said it and so did John. He said that Oliv’s voice came ahead and so tomorrow we’ll see how America votes.

Team Blake went up afterward and of course, he chose to challenge Team Adam. Both coaches decided to make this a country battle and so representing Team Adam was Andrew Jannakos while Team Blake chose Dexter Roberts. It was old country vs new country. The artists were equally great vocalists and Andrew was admittedly shyer onstage. He didn’t look like he was comfortable in his own skin and surprisingly that didn’t affect his voice. John was the only coach willing to give his full honest opinion and he said that Andrew won this battle. It usually tends to go to Dexter because he has the great voice and guitar skills but this one performance must go to Andrew because his vocals were just a tad ahead.

But for the last Cross Battle of the night, it had been up to Team John. John chose Maelyn Jarmon who many will remember as the vocalist that was deaf in one ear and who went on to receive an all four-chair turn during her Blind Auditions. She was facing someone from Team Adam. Adam has challenged by each of the other three judges and so he was up to the task again. He nominated Rod Stokes and his country star did wonderful and amazing things with a Michael Bolton song. Maelyn had also been great because the song “Made World” fit her voice like a glove and so this another battle with no clear winner. And so America was going to have a tough times on their hands with all the people that have been neck to neck in this competition.