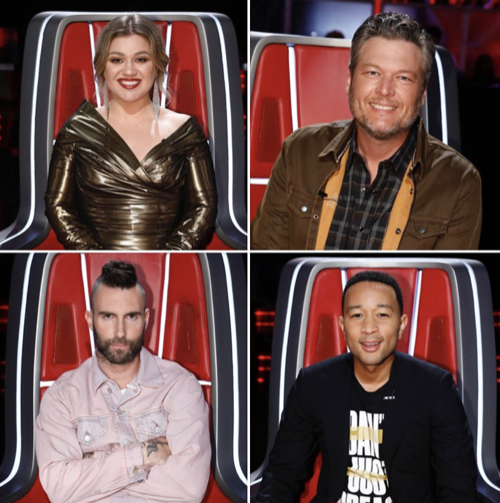 Tonight on NBC’s Emmy Award-winning musical competition The Voice airs with an all-new Monday, April 22, 2019, season 16 episode 13 and we have your The Voice recap right below. On tonight’s The Voice season 16 episode 13, called, “Live Cross Battles Part 2,” as per the NBC synopsis, “The artists take the stage in front of the coaches as they compete for the opportunity to advance in the competition.”

The second part of the Cross Battles tonight and Adam gets the first choice. Adam chooses to battle Kelly

Judges Comments: Adam: “You are both phenomenal, Jej you know I am a fan of yours. This was the best time to have the best possible performance. LB I love your composure and the depth of your voice, that was the church. I am blown away by you.” Kelly: “I am with Adam, this is probably the best cross battle. Both were very different songs. Very different approaches. Jej, you are so talented to sing a Bruno Mars song, your runs are so powerful and seamless.” John: “I liked both performances. You are a fantastic vocalists. You are both exceptionally talented, my preference was LB, you were hot and you brought us to church.” Blake: “Jej, you set the bar so high for yourself that you pretty much did what we expected, it was incredible. You blew the roof off the place. LB I did not expect that level of greatness, I think out of sheer what the hell just happened, I am leaning towards LB.”

Judges Comments: Adam: “Kalvin what I just saw you do, I knew you were a great singer already. You just went from a great singer and very much in the conversation to a front runner because that was a front runner’s performance. Unreal. I think your poise and what you did with the song, you made it something completely different. I am a huge fan of yours.” John: “I think both of you did a great job, interesting the songs that you both chose. Both of you sounded fantastic. Julian, I am so glad to have you on my team. I really love seeing the different sides of you.” Kelly: “You both are great singers. I am floored, everyone is so good. It is going to come down to song interpretation and selection. For this one here, I think Kalvin won out a bit. But Julian you are a beast.” Blake: “Julian, I loved how you stepped out, you went for more and tried more things. It wasn’t a perfect performance, but it caught my attention. I think Kalvin won this battle.”

Judges Comments: Blake: “Great job to both of you, there is something sort of vintage about both of you. I got to talk to Carter, I hope you recorded this show, look back at Carter and see how far he has come. I love your baritone voice, great job tonight.” John: “I thought both of you did a really good job and I’m sad that you are two friends that had to go against each other, I didn’t know that. I just have to say, I told you Jacob in rehearsals, your voice is rich and special.” Kelly: “I agree with Blake, you are both very mysterious, I would love to hear both of you on vinyl. I don’t want to pick.”

Judges Comments: Kelly: “I thought everybody did a good job. I am going to focus on The Bundys. That sibling harmony is so beautiful. It is so hard to do that life, it is beautiful, I hope America votes you through.” Blake: “I got to say, you strolled around the stage like you were looking for some change you dropped, burning down the place with your voice. That is a hard song to do, country music fans are losing their minds right now.” Adam: “The looking for change thing was a weird analogy. It is hard to go against three people, but Andrew you sounded like you were three people.”

Judges Comments: John: “Oh man Shawn, I recognize how beautiful your voice was in the tenor area but I had no idea how beautiful your voice was in the baritone base. Very few people can do that, I was just floored by it. Great job.” Blake: “Karly, thank you so much for bringing a breath of fresh air to this show and that was your best performance so far on this show.” Adam: “It hurts me to agree with Blake, but Karly I am so proud of you, you are a breath of fresh air. And, I have to show Shawn some love as well.” Kelly: “I just want to say you are both totally different from each other, Shawn I love your spirit. I think this is an off paring and I can’t choose.”

Judges Comments: Adam: “This really sucks because Jimmy was on my team, you did a great job. Kendra, you have one of the most powerful and strong voices in this competition. It is amazing to watch you.” John: “Kendra that was fantastic, you did a great job. Jimmy, I am so proud of you, you executed that so beautifully. I am so proud.” Blake: “I kind of like Kendra, it is hard for me to see you do so great and not on my team. You both did a good job, but I am going to go with Kendra.” Kelly: “You both did a great job. I find Kendra’s tone captivating, it bleeds through your voice.”

Kelly chooses to battle John. Rebecca Howell (Team Kelly) singing, “Any Man Of Mine,” vs. Beth Griffith (Team John) singing, “I Put A Spell On You.”

Judges Comments: Kelly: “I am sad the way this is ending up. Beth, you did a great job. Rebecca, you are a force, I am so proud of you tonight.” John: “You both were fantastic, I loved both performances. Beth you gave everything, you gave that raw energy. It was raw, it was nice.” Blake: “Rebecca you were a shock for me tonight in a good way. You took that song to the next level. Beth, you are so good, that note you hit at the end was ridiculous.” Adam: “Man that was really tough, Beth you were incredible. You are an amazing presence. Rebecca, the shock of the season so far is you.”