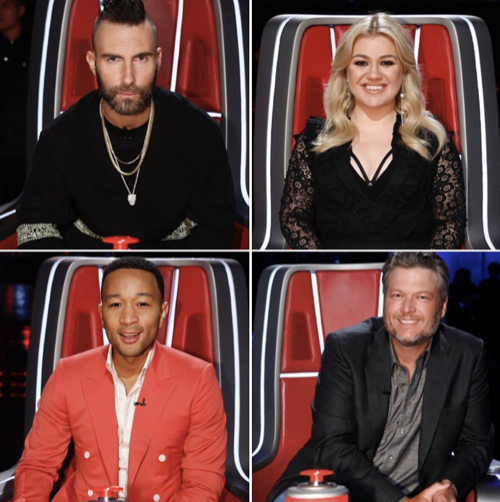 Kelly opens the show introducing her team. She has a mix of country and pops with Rebecca, Abby, Jej, and more. She is going for a three-peat, ready to take the win this season! Rod Stokes takes the stage to perform for Team Kelly. The crowd goes wild. Matthew Johnson of Team Kelly takes the stage next with a little R&B. It’s on to Rebecca Howell. She gets the crowd fired up.

It is on to Team John with his performers. She is confident they will all show America how great they are. They have a great range of talent. His team is team and strong. The other coaches should be concerned, John tells everyone.

John stands to clap for Lisa. The crowd goes wild. On to Jacob Maxwell who sings Total Eclipse of the Heart. Jimmy Mowery sings next, choosing Young Blood. Celia Babini takes on a Stevie Nicks next, hyping up the crowd.

Maelyn Jarmon from Team John is next. With Higher Ground, the last Team John performer Shawn Sounds end the run. He gets the crowd going making his way across the stage.

It is on to Team Adam now with 4 contestants left. The 4 make up a great mix with Rock n’Roll, pop and more. His team may be small but it is powerful.

Kalvin Jarvis kicks off the run for Team Adam. The crowd sings along Betsy Ade takes the stage next.

Team Adam’s next performer Mari performs next. Adding some soul to the night, 18-year-old Domenic Haynes woos the crowd with his performance.

It is Team Blake’s turn. Blake has 8 contestants in the fight. As a coach he tries to do the opposite of Adam, he tells everyone!  The 8 are introduced. Blake thinks they have great instincts, talent, a uniqueness within music and the voices that will win.

Andrew Sevener is the first member of Team Blake to perform his country act. Selkii, a steal from Team Adam, is up next playing her guitar.

Oliv Blu hits the stage next. The crowd whistles on the finish. Oliv raises her hands to hear more with voting open.

Team Blake continues with Gyth Rigdon singing his rendition of the country song I Want To Be Loved Like That.

A previous steal, Team Blake’s Kendra Checketts. After a hypnotical piece, she leaves the stage with a smile. Carter Lloyd Horne takes a chance and sings a little Elvis. He pulls it off given the happy crowd.

Boston native Kim Cherry plays the piano while singing TLC’s famous song Waterfalls. The night will be closed out with Team Blake’s country singer Dexter Roberts singing Ain’t Nothing About You.

Voting is open with The Voice returning tomorrow night with results.