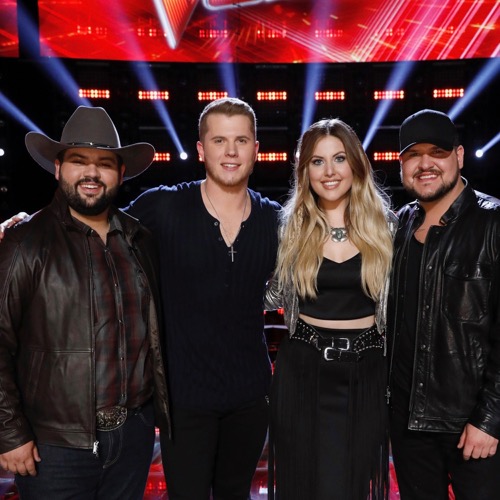 Tonight on NBC’s Emmy Award-winning musical competition The Voice airs with an all-new Monday, May 20, 2019, season 16 episode 21 and we have your The Voice recap right below. On tonight’s The Voice season 16 episode 21, called, “Live Finale, Part 1,” as per the NBC synopsis, “The final four artists perform live for the coaches three times; one solo cover, a special duet with their coach and the debut of their first original single; one of the four artists will be one step closer to being named The Voice.”

Usually, no one knows who’s going to win much less at this point in the competition and so judges would all talk up their competitors, but in all honesty, it does look like Blake Shelton might win again this year!

Why Blake? Well, there were three members of his team in the finals and all of them were strong vocalists. They were also multi-talented with the majority of them know how to play at least one musical instrument. Blake got really lucky with his team this year and the only competition he faced as a judge was John Legend. The judge still had Maelyn Jarmon on his team. She could out-sing anyone and her range was perhaps the best. Maelyn got to perform first and she introduced her original song “Wait For You”. It did amazing things with the purity of her voice and it was also a song from a heart because she was missing her boyfriend. Her guy was worried if she was ever going to come back and she was.

Maelyn was going back to after she won the competition. Her coach thought so and so did Adam Levine. He didn’t have a dog in this fight and he reminded of that because he didn’t want them to think this was simply about which coach he liked best. Everyone knew that Blake was his buddy, but Adam still thought Maelyn deserved to win. She brought the most to the table and in a fair world, she would get her due. She has one more performance for the night and was already making a huge impact with her original song. And so it was up to the contestant that followed to keep the mood going and luckily it was Andrew Sevener. He brought in some good old rock n’ roll with Blake and together they performed “Alright Right Now”. Which was a huge crowd pleaser.

The next performance was from Dexter Roberts. He sang Randy Houser’s “Anything Goes” and it was such a heartfelt performance. His coach said that they either played things pretty smart by waiting on this song or they were dumb not to use this song before. Either way, it was a great performance. Dexter tends to get lost in the moment and this song required it. He got to close his eyes when he was deep in his emotions and it only added to the performance. It also made everyone hunger for his original song. They wanted to know what it was going to sound like and if he was going to play his guitar again. The guitar was a part of him by now and overall he did amazingly. Kelly Clarkson called this one her favorite performance and she was glad to see a great country musician.

Blake next collaboration was with Gyth Rigdon. They performed the Eagles’ “Take It Easy” and they had fun with this one. The song perfectly matches Blake’s personality. He was the fun-loving coach. He knew jus what say to make everyone feel at ease and he has this easygoing relationship with each of his contestants. They all got to joke and laugh with him but occasionally they also hugged him. Blake was a hugger. He also gave them a reason to hug them because he and Gyth just went out there and had a blast. The other judges were dancing in their seats and so this really has been a year for country musicians on the show. It’s like they came out of the woodwork for this season and it continued on with the next performance.

Andrew Sevener debuted his original song “Rural Raising Route”. It was fun, catchy, and it was the sort of country music he prefers. It has that rock n’ roll aspect to it and the song had been a huge crowd pleaser. The audience just ate it up and it was his strongest performance yet. The judges said that he’s really been in the zone for the last few performances and that’s because he found his thing. He was the middle ground of country music and it fit his voice to a tee. The judges all told him that he should be singing songs like this and the artist himself said he found his niche. He was going places with that unique voice of his and, even if he didn’t win, he would still have a hit on his hands with that song alone.

Maelyn also came back for a collaboration with her own coach. She and John sang “Unforgettable” and it was an important song for John. He won his local star search with this song and Maelyn was also hoping this song would work the same wonders with her. They performed the song with an orchestra and the saxophone and it had been beautiful. They knew how to sing the hell out of this song and it had been a great collaboration. So it was two for Maelyn. She was giving incredible performances all night and there was no reason to doubt her as a real threat. Maelyn was the one most people thought would win and the only person doubting that was Blake. Blake has three competitors and he thinks the one that will take it home for him is Gyth.

Gyth went on to have a second performance with the song “I’ll Do Something Right”. It was a great song for his voice and it also played into the genre that he loves the best of country. It was very New Gen! His voice has that raspy quality that made anything sings great and even his weakest performance this season had a lot of heart. Blake believed that Gyth would win but he might just so be wrong with this one. Dexter Roberts was another great voice and he debuts his original song “Looking Back”. Sometimes the guy that’s part of the new country doesn’t hold a candle to the guy singing the old country songs. Dexter was just as talented and he knows how to attack a song without any of the nasal sounds.

Like Gyth, but he does have that problem on occasion. Andrew Sevener performed next and he did a country version of “Lips of An Angel”. There was still some rock in there and Andrew knew best how to combine these two aspects to the one song. He also got to show a softer side of him and it played very well. He was also giving Gyth true competition and so maybe Blake had been a little too quick to think it was Gyth that was going to win this one!

Though speaking of Gyth, he was the only one that wrote his original song. He wrote “Proof I’ve Always Loved You” because he figured people have one true love out there and, while it didn’t seem like he ever experienced it, it was still something he believed in. He was real and it came from the heart. It was also a great fit for him. It wasn’t country in the traditional sense and so this song was a genuine example of him being New Gen. Dexter also came back with collaboration and he got to sing “Hardworking Man” with his coach. Blake had fun like he always does and it was a great upbeat song to get everyone in the mood for the finals. And so everyone did a great job tonight and so no one at home should forget to vote while they still can.

Maelyn closed out the show with her showstopping performance of “Hallelujah”. She made the song her own and it was so beautiful that Adam was again singing her praises.

Whether its Maelyn or anyone else, please don’t forget to vote!!!!!!!!!