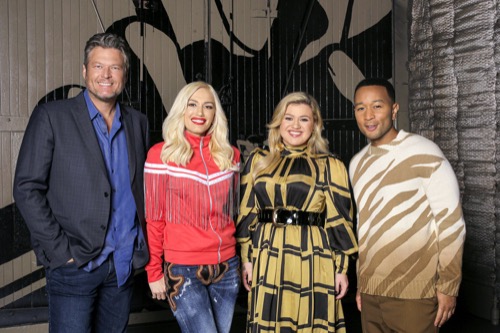 Tonight on NBC’s Emmy Award-winning musical competition The Voice airs with an all-new Tuesday, September 24, 2019, season 17 episode 2 and we have your The Voice recap right below. On tonight’s The Voice season 17 episode 2, called, “The Blind Auditions Premiere, Part 2,” as per the NBC synopsis, “The “Blind Auditions” continue as superstar coaches Kelly Clarkson, John Legend, Blake Shelton and Gwen Stefani all vie to discover and coach the next singing phenomenon in the “Blind Auditions.” The vocalists compete to be selected by one of the coaches and fight for a chance to be named “The Voice.””

Shayne Q from Sacramento, California, he is a special needs driver and is the first contestant up tonight singing, “Tennessee Whisky.” Gwen is the first chair to turn around, then Kelly, Blake, and John. It’s a 4 chair turn for Shayne. Gwen says she turned her chair first because every time she thought his voice was one thing, it turned to something else. Blake says he has been doing this show along, and he is letting this article speak to for himself, that he is the greatest of all time on The Voice with a total of six winners. John says that is a lot of arrogance from someone who lost last season. Kelly loves that Shayne didn’t categorize himself and no matter who he picks, he is going to the final. Shayne chooses to be coached by Kelly.

Max Boyle is from Toledo, Ohio and started by performing for his family, but as he got older he kept it to himself, he is singing, “Wayfaring Stranger.” John is the first chair to turn around with Kelly trying, but she was blocked. John apologies to Kelly for blocking her. Kelly tells Max that he is good and should have been on her team. John says that he is from Springfield, Ohio and knew that Kelly would be his biggest competition and he had to block her. He goes on to say that it was a daring performance, and welcome to Team Legend. Blake says if he hit his button he is sure he would have gone with him, and he thought he would have been better with someone else.

Hello Sunday is next, the group is made up of Myla Finks and Chelsea Grover from Magnolia, Texas who met at a summer camp, they are both only children and they are singing, “Blank Space.” Kelly is the only chair to turn around. Kelly loves their name, Hello Sunday, and she thinks they have something magical. Blake says Hello Sunday, and tells them it is important for them to have someone like Kelly in their corner.

16-year-old Emily Bass is the next contestant when she is not doing music, she loves to sketch. She started singing when she was five years old. Everything that she has done has led up to this moment, she is singing, “Blank Space.” Unfortunately, nobody turns their chairs. John says they all loved what they heard but it needed a little bit more polish. Blake asks her to come back next year and give it another try. Emily gives all the coaches a gift, a sketch of themselves.

Royce Lovett is next, he is from Tallahassee, Florida, and met his wife while he was singing in a band, they have a little son. He has turned down things to be a family man and is excited to be on The Voice. It’s been 10 years of full-time music, Royce is singing, “911.” Gwen is the first person to turn her chair, followed by Blake. Gwen gets up and starts dancing. John tells him that there is competition between the two coaches, he felt their pitch issues, but that can be worked on. Kelly tells him that Gwen has never danced for anyone. Gwen says his voice is great, and if he doesn’t pick her, she will be so embarrassed. Blake says he has a playlist that consists of Bob Marley and Jimmy Buffet, Level 42; pick a coach in the name of God. Royce picks Gwen as his coach. Blake says that he had a better chance of Garth Brooks auditioning for The Voice than getting Royce on his team, and that is not right.

Elise Azkoul is 28 from Atlanta, Georgia, she loves to eat and loves to dance. She comes from a big musical family, mostly from her grandfather whose side of the family wrote Last Dance and It’s Raining Men. She feels like her grandfather is always there even though he passed in 2013. Elise is singing, “Million Reasons.” Gwen turns her chair. Kelly says she loves her style. Gwen loves her tone and her strong side. Blake says that vocally she is a good match for Gwen.

Cory Jackson is 24 from Johnson, Arkansas and he is getting married in a few days. He has chosen to sing, “Galveston” by Glen Campbell. Blake is the first chair to turn, then Kelly and Gwen. Blake says he did a great job. Gwen says if he wants to take a risk, she can help him. She asks him if he wants to be country, and he says yes. Gwen is disappointed. Cory chooses Blake as his coach.