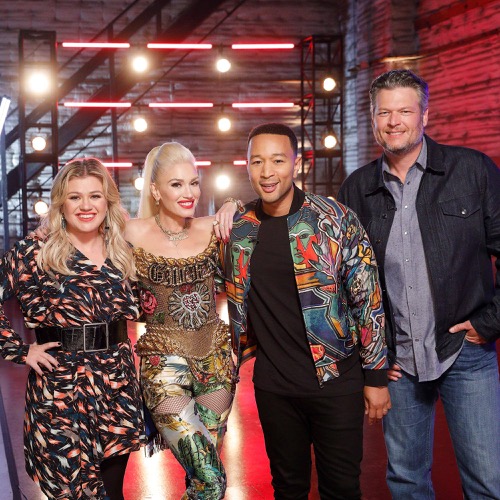 Tonight on NBC’s Emmy Award-winning musical competition The Voice airs with an all-new Monday, September 30, 2019, season 17 episode 3 and we have your The Voice recap right below. On tonight’s The Voice season 17 episode 3, called, “The Blind Auditions, Part 3,” as per the NBC synopsis, “The “Blind Auditions” continue as superstar coaches Kelly Clarkson, John Legend, Blake Shelton and Gwen Stefani all vie to discover and coach the next singing phenomenon in the “Blind Auditions.” The vocalists compete to be selected by one of the coaches and fight for a chance to be named “The Voice.” Carson Daly (“TODAY Show”) hosts.”

The first contestant was Mendeleyev. He has an unusual name, but there was a lot of backstory behind it. His parents as it turns out was a little bit of everything. They were hippies in the general sense because of they very much out there and at the same time they didn’t exactly conform to the hippie mantra. They named their son after the greatest scientists of the era rather than something like Sunshine or Rainbow. Yet, the name makes him stand out and he lived up to it with unusual performance.

Mendeleyev stripped down his performance to the bare necessities. He didn’t have a band or a backup track and so he just went out there with his guitar. The artist would go on to prove that was he needed when all four judges turned around for him. The judges had loved his take on a classic. It was very bluegrass and that was something Gwen could relate to. She used to go with her parents to those concerts. She was even winning over Mendeleyev by reminiscing and she didn’t lose him until John started singing.

John was the only one that knew Mendeleyev’s favorite artist. He also sang some of the guy’s work and so that was enough for the artist. He chose John’s team right then and there. Though to be fair, most of the judges saw the writing on the wall when John started to sing. They knew by then that John won because that’s how tended to win. He would make those rare connections with the contestants on stage and really that’s something they all try to deploy. Kelly even did the same with Jake Hoot.

Jake was a good ole country boy. He was nine when his large family moved to the Dominican Republic as missionaries and he was a natural at standing out. Jake was a good two feet taller than many of his fellow students. Which could have hurt him and he chose not to let it. Jake chose to focus on his music. He was the musical director at many of the churches the missionaries would startup. It helped him gain confidence and it taught him how to command a stage. A tactic would use tonight as he won over Kelly.

Kelly was technically the only person that turned around for Jake. She was surprised when Blake didn’t and Blake said he wasn’t going to fall into that trap. He believed that Kelly would have blocked him. He swears he saw her do it after she turned around and that’s why he hadn’t done the same for Jake. So, he did like Jake. He just didn’t want to lose out because of Kelly underhanded tactics and no one believed her as she claimed she didn’t do it. They did notice on the other hand that Kelly sat out the next one.

Calvin Lockett did his version of an old Temptations song. It was subtle and it won over three of the judges. Even Blake turned around for him. Blake has worked with plenty of R&B singers in the past and he knows how to coach them. He knew he could do the same for Calvin. The problem was that he was going up against two other judges that also have the experience. This was John’s field and therefore he probably knew the best. There was also Gwen who’s gained the experience with previous seasons on “The Voice”.

All three had something to offer. It was up to Calvin to decide what would work out best for him and he decided on Gwen. Gwen won him over by saying he didn’t have to be just one type of artist. It stopped and made him think and that’s what he wanted out of a coach. Not that hadn’t surprised everyone, he did. They all thought he would choose John and that went for his family as well. They were just as thrown as everyone else. Calvin had made an unusual choice. It was not the first of the night and it wasn’t the last.

John would in turn surprise everyone when he turned around for a country artist. He was the first to hit his buzzer with Josie Johns and he was up against Blake. Blake was the go-to country artist. He always loved rounding up the country musicians and this year wasn’t any different. He was interested in having Josie for his team. He played up his own country music background and he really wanted her once he fought out she was from Alabama. She has such a cute accent. She also one of the youngest this year so Blake ended up winning someone that could potentially win this thing.

It would be another Chevel. Chevel was known as the country fairy and it helped her to win her season. As long as there was a way to sell a great voice, anything was possible. Johnny Sanchez was another contestant this year and he seemed as well sounded like a country musician. That part needed to be clarified because Johnny was hoping to join Gwen’s team. It seems has a rocker side to him and he tried to bring it out with his own guitar. It just wasn’t enough. Johnny was nervous and his rendition was so unique to him that threw anyone that knew the original.

The judges didn’t make Johnny this year. Thankfully, he can always come back and maybe one day it will be his day. There were other contestants in the meantime and one of them Marybeth. She was another country musician. She has a strong voice as well and she quickly won over three of the judges. Blake was the only person that hesitated. He said he saw Kelly block him again and so he waited until the very last second to turn and that’s when his suspicions were confirmed. He was blocked from choosing Marybeth.

It was the last block because they now have all blocked someone. Usually, it was Blake they blocked and so he was used to it by now. It didn’t stop Blake from being a fan and later on, someone had played Gwen’s song “Don’t Speak” as Kelly was talking. Everyone thought it was a fluke at first then Blake was seen pressing the button. Blake tried to sabotage Kelly’s chances of winning and he even succeeded because Marybeth made the surprise choice of picking John. John heard a versatility in her voice that he couldn’t wait to bring out and that won over Marybeth.

Sometimes it really was about the pitches. The judges had to rely on that alone when they ran out of blocks and that was if they turned around. They didn’t always do that. They let someone like Tamika J slip through their fingers because there wasn’t enough singing. She was a great rapper so all the judges needed to hear was some more of the singing and that would be enough for them to make a decision. Not that Kelly didn’t regret not turning around. Her regrets began piling up while Tamika was still in the building so if only she could have auditioned again right afterward?

The judges lost out with the contestants they sent away. They didn’t want to repeat that same mistake with Kiara Brown. The young woman was from Las Vegas and she actually wrote a song in the fallout of that mass shooting that took fifty-eight lives. Kiara’s music went a long way towards healing the people affected at the time, but its also meant she’s a proven a singer-songwriter and that was a highly valued skill. They all were looking for someone who could rearrange the song to fit their voice and there she was.

Both Gwen and Blake turned around for her. They were each making their pitch when Blake accidentally pressed the button that would play Gwen’s song “Don’t Speak” so that’s when everyone realized it was Blake. He even cut himself off by pressing it. The song sort of ruined his pitch and so it was a natural win for Gwen. She got Kiara. She also got the chance to call out Blake for using her music for evil. And so, of course, Kiara picked Gwen because for one thing Gwen wasn’t accidentally pressing buzzers.

The next contestant was Melinda Rodriguez. She was a Graduate student studying music and it easy to tell that it gave her a leg up. She took a song that everyone knew and somehow turned into her own. This quickly gained the attention of both Kelly and Gwen even as the guys didn’t turn around. The guys would later say that they didn’t want to get in the middle of Gwen and Kelly. While Blake said it was okay because he would pick up Melinda during the Battles. So, a strategy was already being considered here.

Blake and John were making plans for the afterward. They were thinking of the Battles and there were still a few weeks of the Blinds left. Until then, it was up to Melinda to make a decision. She thought about it and she chose Kelly. Kelly was just the one she was more included to. Not to say she didn’t like Gwen because everyone likes Gwen and so Gwen was going to have to her own picks. She wasn’t missing out with Melinda.

The judges were all looking for unique talent and there were plenty of those artists out there. Though there also some that were just so good at imitating the original artist that the judges never got a feel of who was actually singing the song. It was like that with Jon Rizzo. Jon was in a band with dad called Then and Now and he often teaches his dad about modern music. It was probably the perfect imitation with his dad and that’s why he brought it out onstage. Like he really sounded like the original artist.

It was such an exact copy that the judges couldn’t pick him. They still thought he was talent so he could come back next year, only they couldn’t pick him tonight based off the performance they heard. It was a loss for Jon and so now he knows to stay away from certain music.

The last artist of the night was Cali Wilson. She grew hearing her mother onstage and it helped develop her own love of music. So, she was pursuing it now in Nashville. She has a great voice and three judges turned around for her.

Only no one will know who she picked until tomorrow night.