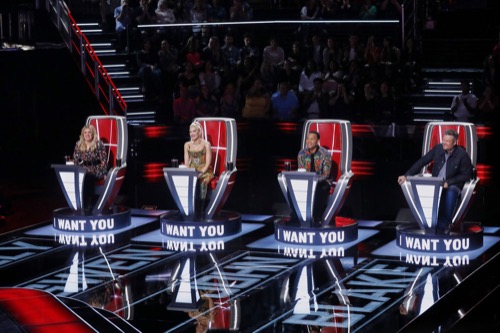 The vocalists compete to be selected by one of the coaches and fight for a chance to be named “The Voice.””

Injoy Fountain is 29 from Wichita, Kansas and she is singing, “7 Rings,” by Ariana Grande. Kelly and Gwen turn their chairs. Kelly says that is her jam. Gwen says that she made a jam once with Ferrell and thinks it was really a bold choice that she did. John says she came out like a boss and he regrets that he didn’t turn around. Blake says that he does that song a lot, Kelly says she will pay good money to hear him sing it just once. Injoy chooses Kelly as her coach.

Jordan Chase is 19 from Pensacola, Florida and he singing, “Makin’ Me Loo Good Again,” by Drake White. Blake and Gwen turn their chairs. John says he excited to see America’s favorite couple fight it out. Blake says when Jordan sings it is incredible because a lot of times when someone has that sandpaper voice, they don’t have the range that you have, the accuracy and the quickness; I am probably going to pay for this later, that is how much I love you. Gwen says her favorite thing about his voice is that it sounds honest – she can imagine being a 19-year old boy with this God-given gift. John says that he has been a 19-year old boy and that was not the greatest year of his life. Blake adds that he knows what it feels like being a 19-year old boy. Jordan chooses Blake as his coach.

Dane and Stephanie are 21-year old twins from Bloomfield, New Jersey singing, “Angela,” by the Lumineers. John and Blake turn their chairs. Kelly says their sound is family harmony and she thinks they did a stellar job. John says he really got into it when they start harmonizing together, he never had a duo and would love to have them on his team. Blake says he has won The Voice six times and he is the only person to bring a duo to the finale. Dane and Stephanie choose John.

James Violet is 21-years old from Syracuse, Utah and he is singing “Sweet Creature,” by Harry Styles. Kelly almost immediately turns her chair. Blake turns his chair, then Gwen. Kelly says she was this close to not having to fight for him. John says his tone of voice is gorgeous. Gwen says his tone of voice is soothing, its emotional, it’s relaxed – she asks him if he is a songwriter, then tells him that he is a really good coach. Kelly says they were singing together, they were both there and it was a moment – she loves his glass of wine vibe. Blake says his voice can take someone out of where they are at – then he says just pick him as his coach. James chooses Gwen.

Jordan McCullough is 20-years old from Murfreesboro, Tennessee and he is singing “Let Me Love You,” by Jorja Smith. Nobody turns their chairs. John says it sounded a little scattered, but the moment that he was really good, he needed a little more discipline. Gwen says that she is sorry nobody turned around for him and thanks him for coming.

Preston C. Howell is 14-years old from Miami, Florida and he is singing “Dream A Little Dream Of Me,” by The Mamas & The Papas. Blake, Kelly, and Gwen turn their chairs. And, so does John. Gwen says that when she turned around he didn’t look like his voice was coming out of his body, she asks him what music he likes, he says Jazz. Kelly says he is a class act, she loves that he didn’t intimidate, he has originality. John says he did a standard, and it was beautiful – an audacious undertaking. Blake says his voice is timeless, you are either born with it or not – to get all four of us to turn around, congratulations. Preston chooses John.