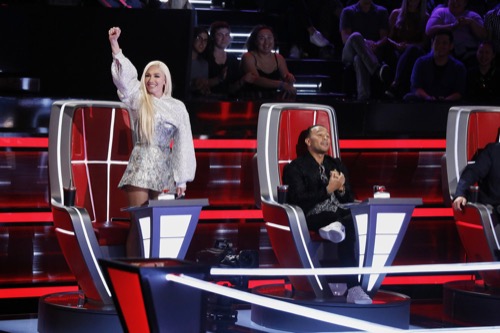 Tonight on NBC’s Emmy Award-winning musical competition The Voice airs with an all-new Monday, October 22, 2019, season 17 episode 9 and we have your The Voice recap right below. On tonight’s The Voice season 17 episode 9, called, “The Battles, Part 4,” as per the NBC synopsis, “The “Battle Rounds” continue as the coaches enlist music industry powerhouses Normani (Team Kelly), Darius Rucker (Team Blake), Usher (Team Legend) and will.i.am (Team Gwen) to prepare their artists to go head-to-head in the hopes of advancing to the “Knockout Rounds.” Each coach has one save and one steal available during the “Battles.”

The first battle is between Blake Shelton’s country artists; Zach Bridges and Cory Jackson, they are singing, “Should’ve Been a Cowboy.”

Judges Comments: John: “I really enjoyed watching you two together, you looked like stars up there on stage. I think Cory’s voice is great on the top notes and Zach yours is rich. At this moment I would pick Zach.” Gwen: “I’ve learned a lot about country music from Blake in the past few years, but I don’t know what he is thinking now. Cory kept stealing the show for me, I would pick him.” Kelly: “From this seat, no performance was better and that is why it was magical. You have different tones, but they blend so well.” Blake: “Zach has this big baritone voice and its commanding, Cory has this great pitch. There really isn’t a winner here.” Blake chooses Zach as the winner of this battle.

This battle is between John Legend’s Marybeth Byrd and Dane & Stephanie, “Burning House.”

Judges Comments: Gwen: “It was so good, so beautiful. This is hard, you are magical together. Marybeth, your style is what I want to listen to. I can’t pick.” Kelly: “I was about to cry. Dane won this for me, it was really beautiful. I would go with Dane & Stephanie this time.” Blake: “John and I both heard something in Dane & Stephanie in the Blinds, you have come so far in such a little bit of time. I am putting my bet on Marybeth to be in the finale.” John: “I am so proud to be a coach for you all, you made everyone feel the emotions. Dane & Stephanie the execution was better. Marybeth, you have so much maturity.” John chooses Marybeth as the winner of this battle.

Judges Comments: Kelly: “What a way to end the night, that was so good. It was cool and different, job well done.” Blake: “This may come as a shock to both of you but Gwen spends a lot of time with me when we are not on the show. She has talked a lot about the two of you and this pairing. Jessie was right on pitch. Rose that you hit that big note and I got so much enjoyment out of it. I’m not picking anybody sorry.” John: “Jessie you have so much fire in your voice, it had passion. Rose, you are a very talented performer. Gwen really did rave about the two of you, I lean ever so slightly towards Rose.” Gwen: “How proud do I feel right now. Rose you have something special, it’s you. Jessie the same thing goes for you, I heard something raw and cool in your voice from the beginning.” Gwen chooses Rose as the winner of this battle.

Blake tries to steal Jessie and Gwen – Jessie decides to stay with Gwen.