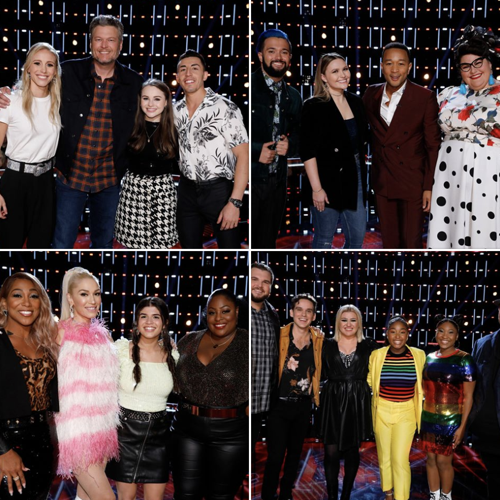 Tonight on NBC’s Emmy Award-winning musical competition The Voice airs with an all-new Tuesday, November 18, 2019, season 17 episode 17 “Live Top 13 Performances,” and we have your The Voice recap right below. On tonight’s The Voice season 17 episode 17, “The top 13 artists perform live in front of the coaches for America’s vote. This week’s theme is “Dedications Week.”

The show was live with the Top 13! The theme tonight was dedication. The vocalists were going to dedicate their performances to either someone or something and up first was Joana Martinez. She was singing in tribute to her hometown. She greatly loved Miami. She also knew many people from back home were cheering her on and so she wanted to show her appreciation to them. Joana thought the best tribute was through the song “Get On Your Feet” because not only does it have the Latin flare but it was also fun and she wanted Miami to be dancing with her tonight.

Joana gave a great performance. The song is a lot harder than everyone thinks and so Joana tackling it like she had been an achievement. To the audience at home, you have until tomorrow to vote he or else she might lose her rightful place in the Top 11! Next up was Ricky Duran. He was dedicating his performance to his girlfriend Alyssa. Alyssa has been with him every step of the way and he almost lost her right before the Blinds. Alyssa had suffered a stroke. She was okay afterward and that’s something Ricky is thankful for the everyday.

Hence the dedication. Ricky showed his love through the song “You Are The Best Thing” and it had been a great performance. It was also great that Alyssa was there to hear it. She was looking healthy and she was there for Ricky just as he was there for her. Next up was Max Boyle. He was dedicating his song to his family and more specifically to his niece and nephew. Mac was from a big family. He misses them all and that went especially for the little ones because often videos and pictures aren’t enough.

Max performed the song “Unaware”. He showed off his falsetto and he got to do it in front of his niece and nephew who were there tonight to cheer him on. Making it a very good night for him. The performances so far had all been great and so it was hard to think of tonight as part of the competition when literally everyone deserved to stay but that didn’t change facts. The fact is this is a competition and so everyone had to be on their game. Luckily, Myracle Holloway didn’t need to worry about that.

Myracle went next. She was a powerhouse this season and she was dedicating her performance to her grandmother. Her grandmother had been one special lady. She stepped up to raise Myracle when Myracle’s mother couldn’t do it and she showered the little girl with the affection she needed to take on the world. Sounds incredible, right. Myracle was thankful for her grandmother and she performed “I’m Your Baby Tonight” in honor of her. It turned out to be one of her best performances to date and so watch out for Myracle because she might just win this.

Up next was Will Breman. He was born different and he faced some bullying because of it when he was younger. Will could have given up back then. He could have let the bullies win and what stopped him was his mother. She told him he was perfect because he was perfect to her and that’s all that matters. So Will dedicated tonight to his mother. He sang “I Won’t Give Up”. He showed the judges a different side to him and everyone was hoping that maybe this time America will come out to vote for him.

Kat Hammock went next. She had one of the purest voices this season and she was dedicating her performance to her grandparents. They were such a huge cornerstone of her life that she still misses them. Kate also chose a song for the dearly departed. She chose “Danny Boy” and there were some hiccups here and there, but overall it was a good performance. She was still finding her way so she didn’t need to worry about that and more importantly she has a loyal fanbase. They’ll vote for her no matter what.

Up next was Katie Kadan. She’s had plenty of heartache and some highs as well as some lows in life. Kate, therefore, was making her dedication to herself. She was still standing despite everything and her heart remains open. Katie also knocked it out with this song. It was a great performance and even Carson said that it felt like the Finale. He could have sworn she won and that they were going through the emotions. And so that was great for Katie because all she needs to do now was keep the momentum.

Cali Wilson went next. The young woman had moved to Nashville by herself and she had felt very alone at the start. Then she had her first performance. Her girlfriend had been a fan and she introduced herself to Cali right after the show. So, they’ve been together ever since. They even made out when Cali made in on Blake’s team. Blake still remembers it because he thought everyone would be hugging him only to see Cali was wrapped up in her girlfriend. It also makes sense why Cali chose the song “Butterflies”. It was about the rush of love and that’s what Cali feels every day.

Shane Q went next. He was a great singer and his coach told him he was probably one of the best voices this season. However, there was a disconnect when he performed onstage. He distances himself from the audience and, while its something he needs to work on, Kelly thought dedication week would help him connect to the song emotionally. He was going to be honoring his mother so that finally lowered his walls. He performed “My Wish” and this time the audience got to feel the emotion in the song.

Up next was Hello Sunday. The two girls were the youngest this season and they quickly won over fans with those baby faces of theirs. Hello Sunday was both talented and had character. This is surprisingly rare because not many people have both and so Hello Sunday have stood out from the very beginning because of it. The kids were good people. They also decided tonight to honor their parents and so they performed “Mama Knows Best” in perhaps their greatest performance yet. It seems the fear of almost going home last week had woken something up in them and there was no turning back.

Next was Marybeth Byrd. She told the world about how her grandpa passed away a day before she flew out to audition and so she had to push past some of that pain in order to perform because she knew that’s what he would want. Her grandpa had inspired her love of music. He was the reason why she was here today making a career of it and so she honored with tonight’s performance. She performed “Go Rest High On That Mountain” and the tears eventually won out in the end because she was just that emotionally involved. And so this was a strong performance from her that everyone will be remembering for a while.

Jake Hoot went next. The country musician surprised no one at all when he decided to dedicate his latest performance to his young daughter. Even his song selection seemed perfectly Hoot. He chose the song “Danny’s Song” and he had his daughter Macy jumping up and down for him as he performed it. She was just so excited. Hoot had been excited as well and he really did great work with this song. He connected with the audience, he allowed them all a glimpse of how much he loves his daughter, and he gave just a light-hearted moment to remember.

As for the last performance of the night, that was Rose Short. She performed the song “I Turn To You” in honor of her coach Gwen because Gwen brought her out of her shell and helped Rose to believe in herself. Rose quit her job, she doesn’t have kids, and still, Gwen made her feel like she was enough. And so Rose went to town on this song because she wanted Gwen to know how special she was to her.